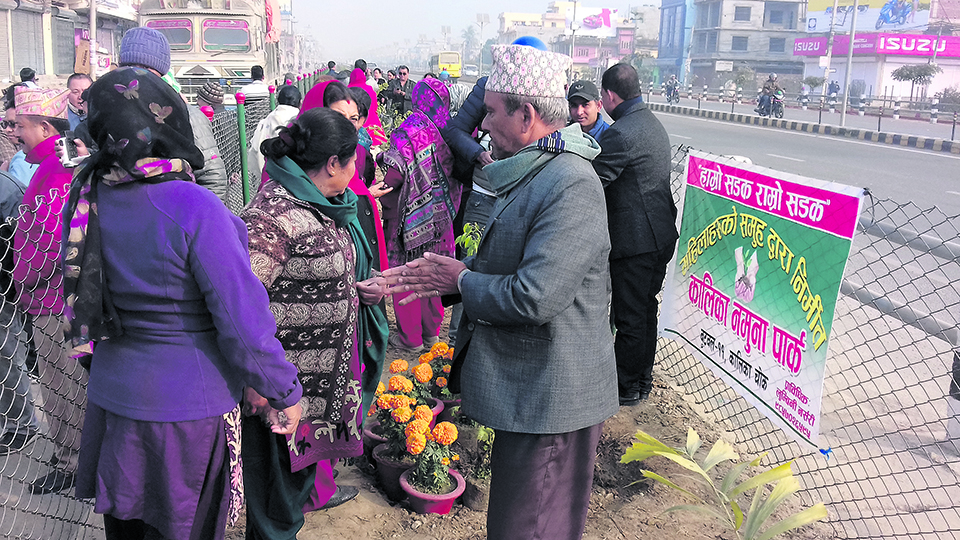 BUTUWAL, Jan 31: Who might not love colorful flowers on the roadsides? Sakuntala Pun of Kalikapath, Butwal would always wonder what if the road next to her house would have been like that.  In reality, the road was full of dust that would irritate her all the time. The 55-year-old would feel unlucky to have to stay in such a polluted area. However, it changed recently when one day, she suddenly came up with an idea. She called few other women to her house and held a meeting on the topic - Hamro Sakad, Ramro Sadak (our road, beautiful road).

“It was one and half month ago, we all came together and talked about it. We decided to take initiatives to translate our dream into reality,” she said. “Making it a reality was not a very big deal, provided all the residents were willing to do it. We realized that with genuine efforts we could make our roadsides green and colorful.”

With Pun taking the lead, local women started collecting funds from households. Those who would not contribute labour had to pay Rs 15,000 while those who were ready to work were charged Rs 10,000.

“Along with collecting the funds, we started planting flowers on the roadsides and cleaning the roads. Our efforts during the last one month have made the locality totally different that what it used to be,” she said.

Around 500 meters roadsides in the Kalikapath area now shine with flowers. Before starting the campaign, the group studied the space, which could be used for planting the flowers. The plan also included areas in between the road and its edges that were not utilized.

This group of women conceived and implemented the plan with an aim to make their surroundings better. However, it quickly inspired the Butwal Sub Metropolis officials and other communities too. After few rounds of meetings with the women, Mayor of the Sub Metropolis, Shiva Raj Subedi has decided to develop similar green belt area along the six-lane road section that falls within the metropolis.

“Their work was very inspirational. And it had us think about adopting similar initiative to make the entire metropolis equally beautiful,” he said. “We have already started working towards this end. Within three months, we expect to do a lot in that regard.”

Not only the municipal office, even the residents of other areas, have been equally inspired by the green belt campaign. Residents of Janakalyan Tole have followed the example. They also established a similar road belt and a park in their area. On Tuesday, the mayor inaugurated both the Kalikapath and Janakalyan Tole parks.

Subedi shared that it would have been challenging to protect plants and make the plan of green belt at the roadsides successful. However, now, since locals themselves have been leading the initiatives, he said that initiatives will be successful.

“When people are not aware or are not supportive, even wonderful plans fail. But with their will and support, huge undertaking also bear fruit,” he noted.

Reflecting back, Pun shared that she was not very confident when she pitched the idea. In fact, she thought the women would call her over ambitious or impractical.
“I wanted it to happen. But I was not sure whether that would work. Sometimes, we don't show confidence in others or our community power,” she said. “But when I told them that we could work hand in hand to make our roads and city beautiful, all women became very excited and expressed their commitment to work together,” she added.

Only 15 houses had first taken the lead

In the beginning, only 15 houses or 15 women in Kalikapath participated in the initiative. Of them eight women showed readiness to contribute labor. While working on the project, they also decided to raise Rs 10,000 each. Later, they thought it would be fine to 'charge' Rs 15,000 to those who were unable to contribute labor.

With the park in place and the roadside full of colorful flowers, the women have formed local committees that are entrusted with the responsibility of taking care of the park and the flowers. The project was completed at the cost of Rs 400,000.

On the other hand, locals at Janakalyan Tole have been contributing as per their will. Residents of the area have donated anything between Rs 5,000 to Rs 50,000 for the project. “This is amazing. We are hundred percent sure that we can make our roads cool and green, flowery pretty soon,” Subedi said.