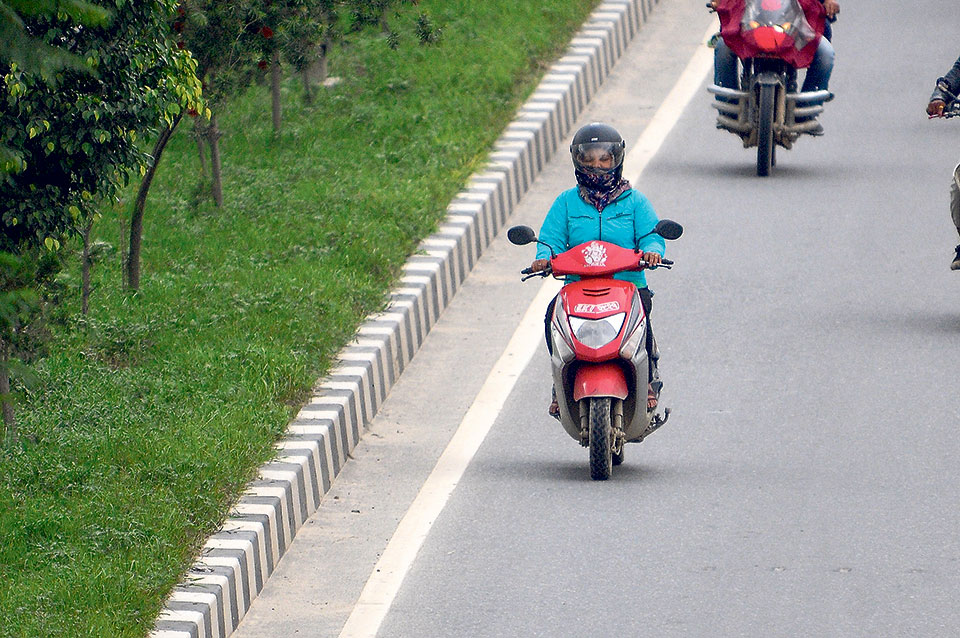 One of the most popular jokes on the internet about women who drive goes like this: ‘Why do you think women cannot drive? Of course women can drive, they can drive a man crazy.’ This is a blatant example of everyday sexism that women face all over the world and Kathmandu is no different. Out of the ten women we spoke to in the valley, eight of them said that they had been subjected to sexism at least once while driving. Our society is one that expects its women to be in the private sphere and not in the driver’s seat, and quite literally so. 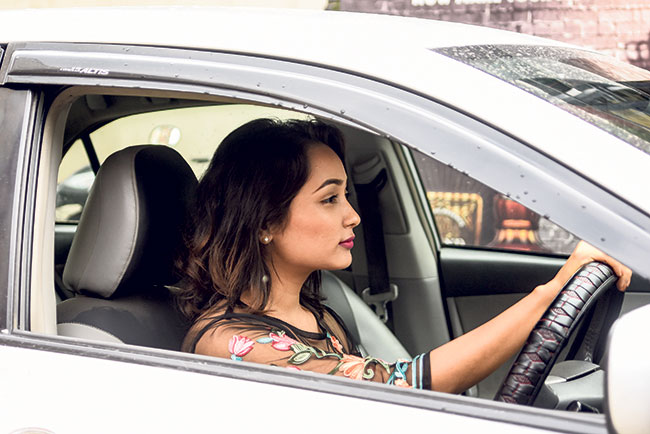 Many women we spoke to confessed that getting a driver’s license or driving on the road is difficult for women in the valley. Not because they are bad drivers, but because they are expected to be one. Sonika Mahat, a 21-year-old graduate, was confident that she would pass the test to get her driver’s license. However, as soon as she entered the driving test center, she was told that she looked underage to get a four-wheeler’s license. In addition to that comment, she also heard things like ‘very few girls can pass the test’, ‘cars are not meant for women to drive’ and other such sexist remarks.

“These kinds of derogatory remarks not only lower your self esteem but can also lead to frustration and road rage,” says Mahat adding that many of her friends have actually stopped driving because they don’t want to be at the receiving end of such snide comments and criticism stemming entirely from gender bias, and not their driving skills or lack thereof.

Rajan Pokhrel, an official at the Department of Transport Management, is oblivious to the fact that many women are demeaned and harassed while taking their driving trials. According to Pokhrel, if such discrimination is taking place at test centers then their department will definitely look into it.

But women who drive believe that this matter isn’t one that a ‘looking into’ will fix. The problem, they believe, is in people’s mindsets and unless there is a radical shift in the way people think about gender and what it stands for, nothing is going to change.

Even women who drive two wheelers claim they don’t feel safe on the roads. According to comedian Shreya Pokhrel, many male drivers especially those of public vehicles tend to speed up and stop right in front of you when they see a girl riding a scooter. She says unacceptable behaviors such as leering, winking, or even the gesture of a flying kiss at the rear view mirror are very common occurrences.

Chahana Shah, a BA LLB student at Kathmandu University, agrees with Pokhrel. She too feels that young women drivers often become the target of men who take pleasure in demeaning them out on the road. Male drivers shouting and telling her to get off the road is something that happens to her quite frequently. She further says that hearing these kinds of comments is mentally stressful and aggravating, so much so that she has actually started dreading her commutes in the city.

However, 44-year-old Sarika Mishra has a different reason to offer for what’s happening out there on the city roads. She believes it’s actually the state of our roads that is creating such problems. According to her, as a woman who follows all the traffic rules, it was initially difficult for her to adjust to the lawlessness of our roads. She says it’s this chaos that adds to the confusion and leads to anger and its ultimate venting among drivers.
Pokhrel of the Department of Transport Management feels that the times are now changing and that more women are driving every year and that seeing a woman behind the steering wheel isn’t a rare thing anymore.

Despite what Pokhrel has to say, the actual scenario on the road paints a different picture. Isha Khadka, whose father taught her to drive when she was 13 years old and who has been driving for 20 years now, shares an instance of how her husband once got out of the car to let her parallel park and she heard a man in a group of bystanders actually telling his friends that a ‘man had come out of the driver’s seat to let the woman park’ and they were all ogling and smirking at her.

“My husband only learnt to drive a few years ago and he’s still not confident enough to back into narrow spaces or parallel park. But in our society, it’s not your skill that matters but your gender,” she says adding that she fails to understand why it’s so difficult for some men to digest the fact that women can drive properly. “Every time I’m at a parking lot, a parking attendant comes to help without being called for. Some even insist that I just come out and let them park for me,” says Khadka.

Like Khadka, Pratista Thapa also claims to be a confident driver. She has been driving for 18 years now but, according to her, very little has changed over the years. “In the early 2000s, people used to be shocked to see a woman drive. Sadly, even today, many heads turn when they see a woman in the driving seat,” says Thapa who actually feels that the scenario is worse now than ever before.

“Women are often blamed whenever there’s a mishap or even a slight altercation on the road. Even the traffic cops treat you unjustly. If you are a woman, they have a ‘can’t drive’ sign flashing on their minds and it’s evident by the way they speak to you sometimes,” she says.

Khadka shares an instance of how a traffic cop actually made a sexist comment when she was at the Maitighar crossroad in Kathmandu deciding which direction to take during a somewhat gridlock situation. Apparently, the traffic cop said that girls often couldn’t decide where to go and which lane to stick to while driving. There was even a time when a motorbike in front of her backed up without looking and hit her car’s front bumper, and then the rider actually turned around and glared at her.

“A biker who was next to me actually spoke up for me and said that I hadn’t moved an inch while he had backed a good feet or two to knock against my car’s bumper. Hearing that man’s words, the person backed off,” she says giving another example of a time when a car hit her stalled car at a traffic junction from behind and actually blamed her for stopping too quickly when she got out of the car.

Mahat too claims to have had many similar experiences where she was made to take the blame for other’s reckless driving just because she was a woman and that, by our society’s standards, didn’t mean she could drive well.

In a society that valorizes patriarchy and masculinity and expects its women to be subdued and suppressed, these things are going to keep happening. We might talk about equality on all levels, but theory and practice are two very different things. But change has to begin somewhere. And Thapa feels that change is only possible when every household its their sons and daughters equally, gives them equal opportunities, and lets them be independent in their own right. According to her, transforming Nepal into a gender-neutral society is possible but, looking at the current scenario, we still have a long road ahead of us.

‘Construction of Banchare Danda landfill site to complete before Dashain’