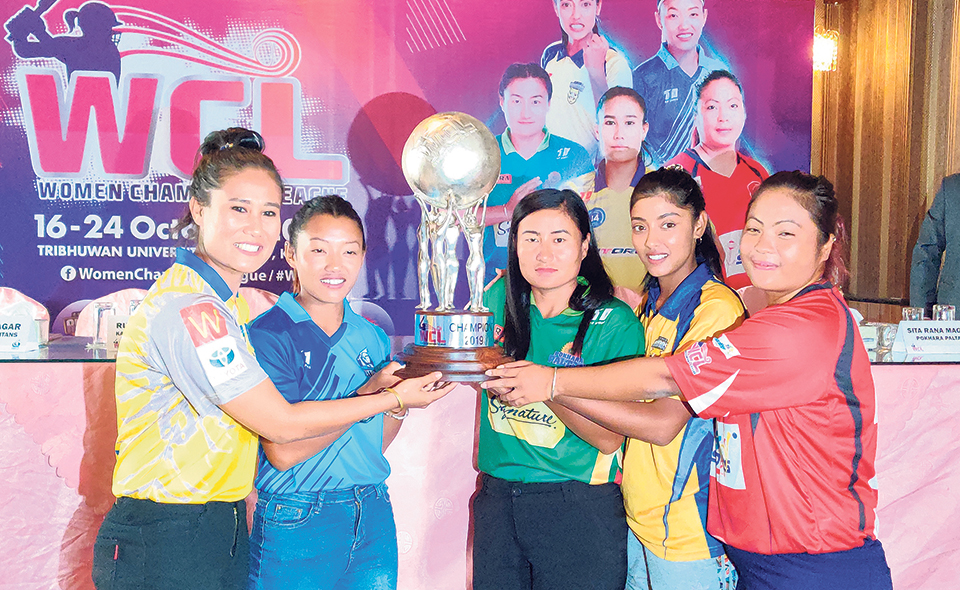 KATHMANDU, Oct 16: The first franchise T20 premier league for women cricketers, Women’s Champions League (WCL), in the nation will make history when Kat Queens Kathmandu and Chitwan Rhinos face each other in the inauguration match at the Tribhuvan University Cricket Ground in Kirtipur on Wednesday.

All the WCL matches will be telecasted live. This will be the first time in the country for any women’s domestic match to be broadcasted live on television.

Queens Event managing director Chhumbi Lama and marquee players from each five franchise unveiled the winner’s trophy for the Nepal’s first ever Women’s Champions League (WCL) in Kathmandu on Tuesday.

Lama said preparations for the tournament are over and the management is looking forward to exposure and development of women’s cricket in Nepal through the T20 cricket league.

“Our sole aim is to promote women’s cricket in Nepal. They deserve this stage. We look forward to a week of good cricket action from the very talented women cricketers of Nepal,” said Lama.

Rubina Chhetri, the captain and marquee player of Kat Queens, was confident her team is the best and a top favorite to lift the trophy.

“I am a little bit scared to be honest. Whole Nepal’s eyes will be on us tomorrow (Wednesday). We will be playing for the first time in front of our home crowd on a live television. However, I believe my team in the strongest,” said Chhetri.

National cricket team vice-captain and captain of Pokhara Paltan Sita Rana Magar said the attention to the women’s cricket has actually given them a positive boost.

“I feel alive due to media. Your attention gives us sense of belonging and value. I am sure, tournament as such (WCL) will help us grow and take our cricket to next level,” said Magar.

The match between Falcons and Paltan on October 21 will be the final group match.

The winner of the group stage will directly qualify for the final match whereas the first and second runners-up will face each other in an eliminator scheduled for October 22 to decide the second finalist.

The final will be played on October 24.

Queen’s Event is also the organizer of Pokhara Premier League.

KATHMANDU, May 11: A total of 107 players have registered for the upcoming Women’s Champions League (WCL), Nepal’s second women’s... Read More...