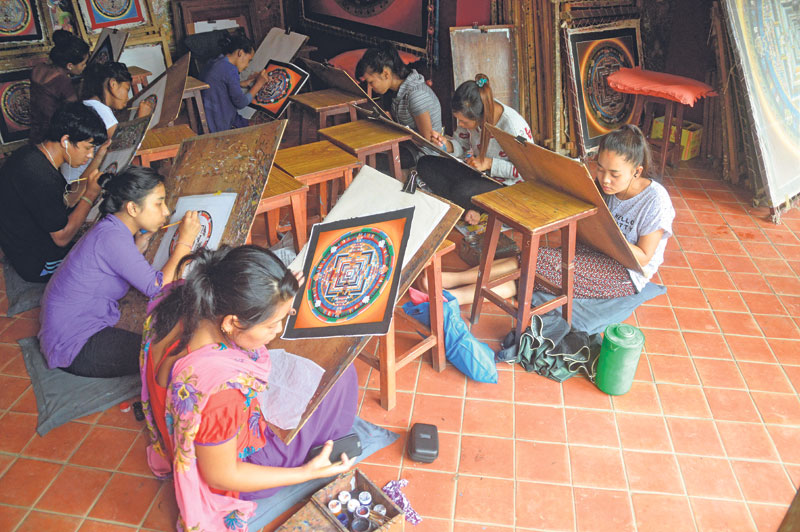 Since the job doesn’t require much labor, pays relatively well, and can have flexible timing, the profession, of latehas been attracting many housewives and college students in particular.
Every single time a customer enters her teacher’s thangka shop in Bhaktapur, Meru Tamang can’t help but look up expectantly from the back room. The 21 year old apprentice can be found practicing her shading and coloring there on the weekdays. She has been training in the arts of thangka painting for a little more than a year now and the first batch of the work she has helped with has only recently been put up for sale. So whenever a potential buyer begins to survey the various thangkas at the shop’s display, she shares that she can’t help but feel a tinge of nerves and excitement.

Meru’s family has had a long history with thangkas. Her grandfathers and great grandfathers were all very skilled painters. However, it’s only been a decade or so that the daughters of the family picked up the paintbrushes. It’s a trend that is gaining steady popularity. While we would’ve been hard pressed to locate a female thangka painter two or three decades ago, these days girls like Meru are paving the way.

Dinesh Joshi of Valley Handicrafts and Workshop has been selling thangkas for more than 40 years and he shares that he has been witnessing the changing trends firsthand. “It has a lot to do with commercialization of the thangkas. These days various businesses run solely on the basis of selling them thus they all need more artists. So while traditionally women weren’t allowed or given a chance to make thangkas, these days the attitude has certainly changed,” he says.

This new outlook on the matter seems to have been whole heartedly embraced. Meru’s teacher’s shop isn’t the only center that hires female trainees. It’s a common sight to see women of various age groups attending or working in thangka painting schools and workshops, especially in Bhaktapur, these days.

A welcome change for the likes of Gopini Tamang, 41, who back in the day, clearly remembers not even considering the possibility of joining her brothers and father in the occupation.

“When I was young the thought of pursuing thangka painting didn’t even cross my mind. Even though I was from Rammechhap and almost every household there is engaged in this business, it just didn’t seem like a possibility. I had never seen any other women engaged in the profession and also as daughters, we were always busy. We always had so many household chores to complete. Though I do remember being absolutely fascinated by the colors and patterns of thangkas, we didn’t have the time to paint,” shares Gopini.

It was only when her family migrated to Kathmandu and her husband opened his own thangka factory that she got a chance to learn the art.

Gopini continues, “I actually learned the craft pretty quickly. Perhaps it was because I had seen thangkas all my life and I had witnessed people paint them countless times as well. The only reason I didn’t join them was because nobody asked me to. That just wasn’t the culture back then.”

But now Gopini has been at it for more than a decade. She is one of the more experienced painters at Genuine Thangka Painting School in Bhaktapur. Keen to provide more opportunities to women, the center is known to give priority to female thangka painters and Gopini helps in training the recruits whenever possible.

Since the job doesn’t require much labor, pays relatively well, and can have flexible timing, the profession, of late, has been attracting many housewives and college students in particular. Gopini claims she is delighted to see this significant rise in its popularity especially since most of the women at Genuine Thangka Painting School also have economical problems. She personally knows many women who are using the opportunity to support their families or put themselves through colleges.

Kanchan Shilprakar, 18, falls in the latter category. “I have been painting thangkas for three years now. Right after finishing my SLC, my family faced some financial trouble. I didn’t want to burden them with my college tuition so I decided to get a job. A relative informed me about thangka painting and so far, it has been immensely helpful,” she says.
Shilprakar doesn’t sketch or draw but she has the technical skills to help make thangkas.

As it is, there are many people involved in finishing a single thangka. It is completed in various steps and parts and most trainees only have to focus on mastering those specific steps. A thangka painter can easily earn Rs 7,000 or above depending on their skills and the level of difficulty in their work.

“When I compare my previous and recent works, I can easily spot the difference. The brilliant thing about thangka painting is that if you put in the effort and practice a lot, you will continuously get better. Most who pursue thangka painting will want to quit at one point or the other. It’s inevitable because learning the technique requires a lot of patience and repetition. However, if you persevere, the results will show,” shares Shilpakar.

Being the new generation of female thangka painters, unlike Tamang, she reveals that she has never encountered any resistance from anybody in the community. As far as she is concerned, women painting thangkas is a widely accepted concept. She only hopes that with time their skills too will be as proficient as some of the men.

Chandra Kumar Tamang, trainer and supplier at the Genuine Thangka Painting School, sees this as a distinct possibility. He reminisces about the times when only the Lamas had the authority and the skills to make the thangkas. However, with time, he too is keen to adapt to new ways especially since the flourishing thangka business seems to have opened a new avenue for women as well.

“This is a win-win situation for everybody. The businesses benefit from having more painters and whenever I talk to female painters, I can see that they too are happy for securing such a favorable job. This is a way for us to preserve as well as spread culture as well. Anybody who is interested in the craft should be welcomed and it’s great to see women take such initiatives,” concludes Tamang.

France evacuates more than 300 people from Afghanistan
43 minutes ago