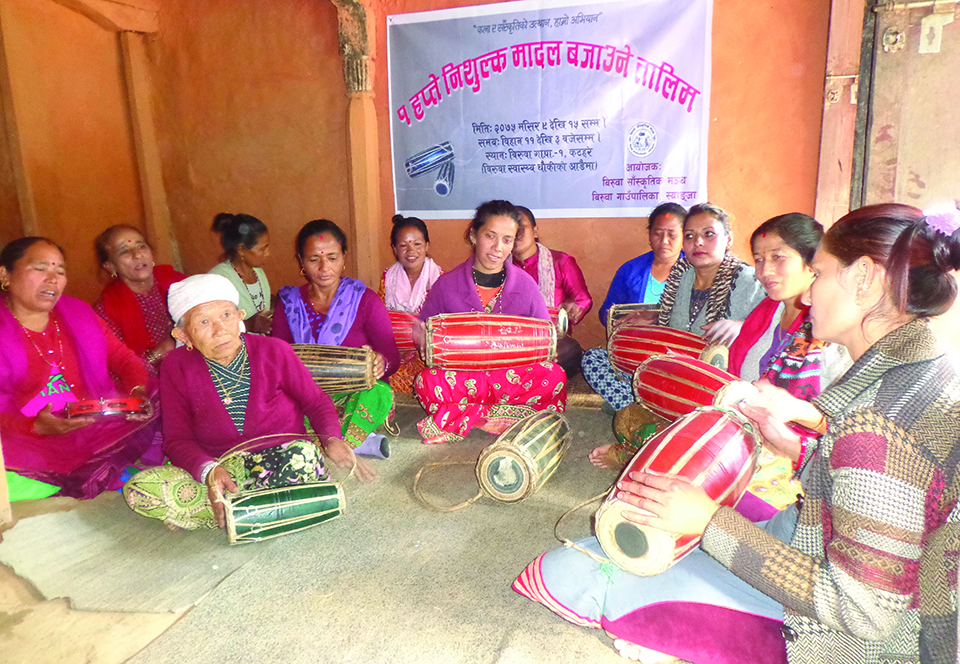 SYANJA, Dec 5: Bishnu Maya Rana, 72, grew up listening to folk songs. She was quite ahead in dancing and singing in a typical style. "We did not have other entertainment sources. But almost everyone in the village knew how to sing and dance," she reminisced.

The elderly lady from Lalang village does not hesitate to dance even today. As soon as she hears the beats of Madal (a Nepali typical drum) 'her body starts to dance to the tunes. "But sadly, Madal is disappearing. The new generation has no interest in it," she laments.

Folk dance and music are gradually losing their charm. Modern songs and cultures have taken a toll on traditional songs and music. So mothers and grandmothers in Lalang village have come forward for conserving it. "We are both learning and teaching others to play Madal. We are also interested in bringing our traditional dancing styles to life," Rana stated.

Since the past few weeks, over a dozen women gather at Katahare of Biruwa village and learn to play Madal. Many of them are quite good at dancing and singing. However, playing Madal does not seem to be their cup of tea.

"In our time, women did not have much freedom. Yet, singing and dancing were allowed on special occasions. During such occasions, we did not play the Madal. It was played by the male," Rana narrated.

Because men would play the Madal, there are a very few women in the community who can play it well. But now, women are learning it. "We want to hand over this precious skill to our youngsters," Rana said.

In a bid to preserve and promote folk music and song, a rural municipality in Syangja has been training women to play Madal by collaborating with a local cultural preservation group.

The ratio of male and female population in the village is not proportionate. Most of the men in the village are working abroad. Males continue to fly abroad for employment in search of better income opportunities. Locals state that the lack of males in the village who could play the Madal has left the women no choice other than to take up their roles.

"In the past, women did not plow farms and also did not participated in funeral processions. But these days, we have to do everything as there is a dearth of males in the village," Rana said. "Women are slowly assuming all the male responsibilities and roles. We are learning."

And playing Madal is one of these roles assigned traditionally to men in villages. Women are doing it with passion and dedication. "We want to save our traditions and culture," Rana noted.

She shared that as soon as the training is over, she is going to teach others in the village. Some other ladies have already been teaching fellow villagers whatever they have learned at in their training classes.

"In the past women were dependent on men for playing Madal. Now, we play Madal and sing and dance as we please," Rana laughed.

Nanda Kumari is equally excited about the training. Just like Rana, she was also pretty good at singing and dancing but had no idea about playing a Madal. "Back then, girls were not encouraged to play Madal. Only boys would play it," reminisced Kumari. "But we are learning to play and we hope that many others will learn to play it from us."

Women representatives from Ama Samuha were selected by Biruwa Cultural Group in the coordination of Biruwa Rural Municipality. The training is provided free of cost by the organizers with an objective of reviving the tradition and culture.

According to Biruwa Rural Municipality and the cultural group, the aim behind encouraging women for acquiring such skills is to conserve and promote local cultures and traditions. If women are taught, children will automatically learn, they noted.

"If mothers are taught, it easily passes onto their children. So, we invited interested women, selected from them and started training them," said Ganesh Rana, treasurer of the cultural group. "We have been doing such programs aimed at the preservation of folk cultures for a long time."

Rana stated that schools and colleges should also promote Madal. Since it is the country's original musical tool, it has to be promoted. "I am already old and what I have learned will go with me. If you do not teach the new generation, they will not recognize our culture and traditions. So, this playing Madal should be actually taught in schools," she stressed.

Several Ama Samuha in the rural municipalities have been approached for participating in similar training, the treasurer added.