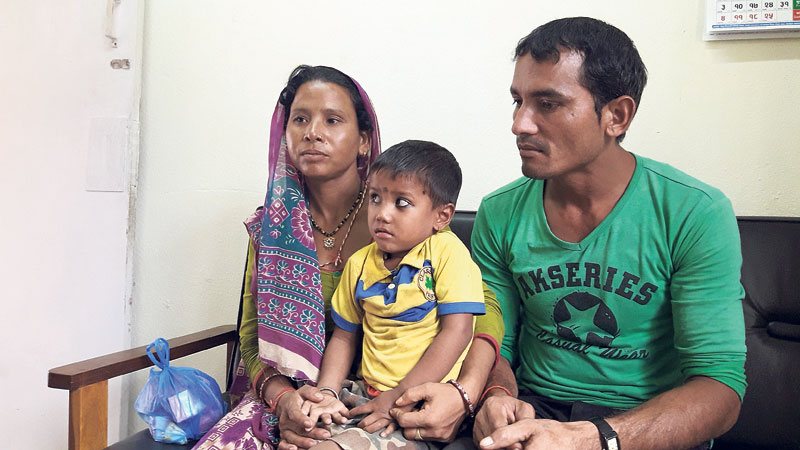 The mother-in-law, son, and father-in-law of Ram Dulari Rana, who was found dead last month in Kanchanpur, at the parliamentary committee on women and children at Singha Durbar on Tuesday. They came to Kathmandu seeking justice in the case. (Kamal Pariyar

KATHMANDU, July 13: After failure to get justice in Kanchanpur district despite repeated pleas along with purported evidence of murder, the mother-in-law of slain Ram Dulari Rana has been knocking the doors of law enforcement agencies in the capital.

Bito Rana, 36, of Bedkot Municipality in Kanchanpur reached Kathmandu last week along with her two and half year old grandson, after her 22-year-old daughter-in-law was found brutally murdered four days after she disappeared on May 31.

Ram Dulari had gone missing following a dispute after Prakash Malla, a neighbor, was found brutally murdered near the highway. He was allegedly illicitly involved with her.

“Had the police station at Daiji responded in time, my daughter-in-law would not have had to die,” the mother-in-law lamented. Five members of the Malla family including the father and sister of Prakash, thrashed Ram Dulari with sharp wooden sticks in the face and mouth, she claimed.

The seriously injured Ram Dulari was then taken away half conscious with the support of two young men and she was never seen again, Bito Rana added.

“A motor vehicle with an Indian number plate was seen in front of their house but we were obstructed from going there to inquire about Ram Dulari,” Bito Rana recalled, speaking at Singha Durbar premises.

According to the dead woman’s family, Assistant Sub Inspector Karan Singh Dhami, in-charge of the police station, initially ignored her request to search for her daughter-in-law and file a complaint.

The Malla family allegedly threatened the Rana family to keep their mouth shut and even proposed a compensation amount, she further claimed.

After ‘gross negligence’ by the local police in-charge, the Rana family along with locals and rights activists approached the district police office, but district police chief Kedar Khanal declined to investigate the case, it is stated.

“DSP Khanal also warned them to keep silent after several lapses on the part of the police surfaced  along with solid evidence of murder,” Sharada Chand, a rights activist accompanying the Rana family said.

Meanwhile, the parliamentary committee on Women and Children on Tuesday sought clarifications from Home Minister Shakti Basnet and IGP Upendra Kanta Aryal and instructed them to reinvestigate the case and provide justice.

A CIB team has been deployed to probe the matter.

Woman stripped half naked and thrashed in public seeks justice

KHOTANG, Aug 3: An office assistant at a school in Diktel, the district headquarters of Khotang has claimed that the school... Read More...

KATHMANDU, Jan 9: Kali Bahadur Gharti Magar, a conflict victim from Salyan, grieves that he has been knocking at the... Read More...