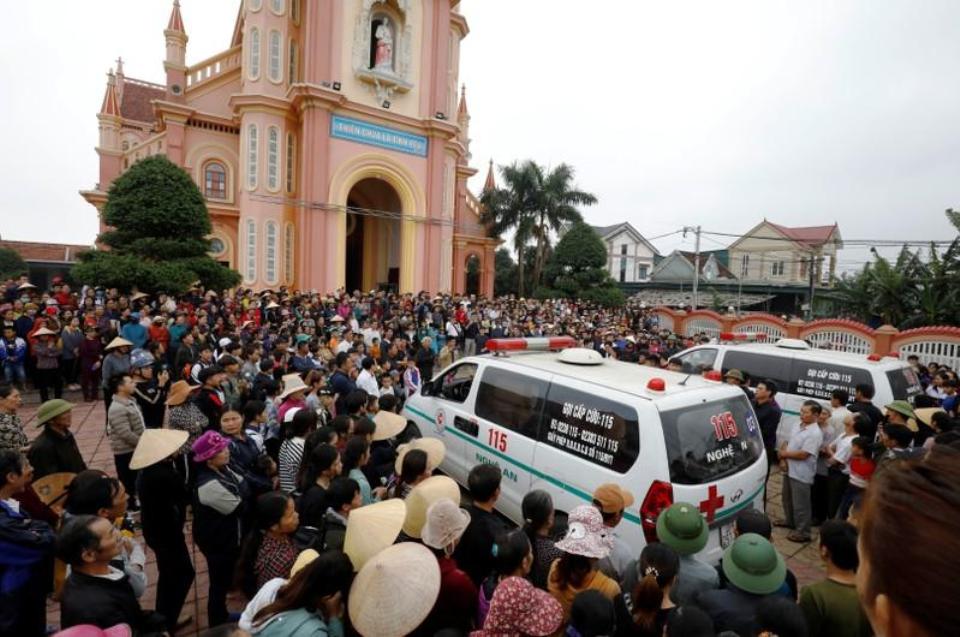 NGHE AN, Vietnam, Nov 27 : With tears in their eyes and white roses in their hands, friends and relatives of the 39 Vietnamese people who were found dead in the back of a British truck last month sobbed as the first bodies to be repatriated arrived in rural Vietnam on Wednesday.

The bodies of 16 victims arrived in the Southeast Asian country in the early hours of Wednesday morning, Vietnam’s foreign ministry said in a statement.

“After waiting for so many days, my son has finally arrived,” Nguyen Dinh Gia, father of victim Nguyen Dinh Luong, told Reuters.

Under grey and rainy skies, a parade of ambulances snaked through crowds of mourners in the rural town of Dien Chau, Nghe An province, from which some of the victims began the doomed journey.

Five of the 16 bodies would be returned to Nghe An on Wednesday, an official there said.

“We are deeply saddened, but we have to hold back the emotion to organise the funeral for my son,” Gia said by phone from neighbouring Ha Tinh province, where another 10 victims were from.

Cloth-wrapped coffins arrived at Hanoi’s Noi Bai Airport early on Wednesday and were loaded into the back of a fleet of waiting ambulances, state media showed.

The bodies would be taken to the homes of their next of kin in Nghe An, Ha Tinh and Quang Binh provinces, the foreign ministry said.

Vietnamese and British authorities continued to coordinate to repatriate the remaining bodies, it added without giving further details.

Police in Vietnam have arrested 10 people in connection with the deaths. On Monday, the British driver of the truck admitted plotting to assist unlawful immigration and acquiring criminal property.

“This is a very difficult time,” Britain’s ambassador to Vietnam, Gareth Ward, said in a video statement released on Wednesday.

“But I promise the families and the Vietnamese people as a whole that we will continue to boost the cooperation between the UK and Vietnam to prevent human trafficking and protect vulnerable people here.”

The grisly discovery last month on an industrial estate near London, a magnet for Vietnamese migrants, has shone a spotlight on the people-smuggling trade bringing the poor of Asia, Africa and the Middle East on perilous journeys to the West.

In Vietnam, poor job prospects, environmental disasters and the promise of financial rewards are all factors pushing people to leave.

Even though the cost of getting to Europe can run into thousands of dollars for migrants ready to pay for a so-called “VIP” service, they believe they can make enough money to justify the risk.

Families of the victims, all aged between 15 and 44, have been plagued by confusion and anguish over how to get the bodies home.

The families would have to pay for the repatriation of the bodies, costing up to 2,208 pounds each, according to a foreign ministry statement seen by Reuters.

The Nov. 14 statement said the Vietnamese government would advance the payment, which families could repay later.

Among the victims was 18-year-old Hoang Van Tiep, the youngest of three siblings who dropped out of school at 15 and left illegally for France a year later, where he worked in a Vietnamese-owned restaurant.

He had begged his parents to help fund his “VIP” move to Britain. They had tried to persuade him not to go, but eventually relented, his mother told Reuters.

At his family home in Dien Chau on Wednesday, devastated relatives surrounded his coffin with flowers, incense, and a large photograph of Tiep wearing a calm and confident expression upon his face.

His friends described him as young, cheerful, and “looking for love”.

HANOI, Nov 30 : The remains of 39 Vietnamese people found dead in a truck near London last month have been... Read More...