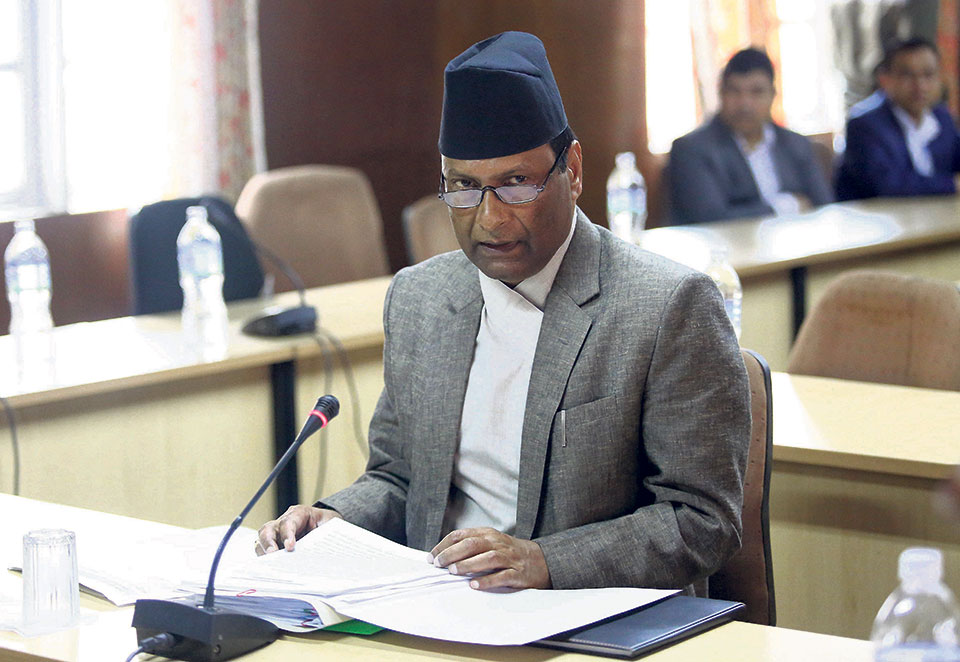 KATHMANDU, Sept 11: The Supreme Court has found a new head seven months and 17 days after then chief justice Gopal Parajuli stepped down from the office over the issue of his date of birth. Acting CJ Om Prakash Mishra assumed office as the new chief justice of the apex court on Monday.

The judiciary has remained without a head for a long time after the Parliamentary Hearings Committee (PHC) rejected the nomination of erstwhile acting CJ Deepak Raj Johsee for the post.

After parliament's rejection of Joshee on August 3, the Constitutional Council recommended Mishra, the seniormost justice, to the vacant post on August 23. Mishra, 64, will head the judiciary for just 112 days, due to the age bar . His retirement could pave the way for Justice Cholendra Samser Rana to head the judiciary.

Joshee, who was on leave since the rejection of his nomination, welcomed Mishra at the SC on Monday evening when the latter arrived there after taking the oath of office from President Bidya Bhandari.

The PHC had unanimously endorsed Mishra's recommendation by the CC earlier the same day, without subjecting him to much grilling. President Bhandari appointed him to the post hours after the parliamentary panel forwarded its decision.

Presenting his vision and plans before the parliamentary panel, CJ designate Mishra expressed commitment to necessary reforms in justice delivery . He also spoke of zero tolerance against corruption and the forming of surveillance and monitoring mechanisms in the judiciary. “I will adopt zero tolerance against corruption and the influence of middleman in the judiciary, and establish mechanisms for surveillance,” said Mishra responding to lawmakers' queries.

Acknowledging the difficulties faced by the general public in accessing justice, Mishra promised to improve the situation and implement an action plan to ensure justice and ensure it on time. “Trust in the judiciary depends on the justice we deliver, our work, and our conduct and behavior. I will focus on improving the justice delivery system,” he said.

Mishra informed the hearings committee that he has handled around 17,000 cases during his approximately 30-year career on the bench.

Most of the lawmakers questioned him about any plans for ending dilly-dally in court decisions, about keeping political influence out of the judiciary, curbing corruption and the influence of middleman, enhancing public trust in the judiciary and other issues.

Only two lawmakers, Niru Pal and Nanda Chapai, raised the complaints received by the hearings committee against Mishra. With the other lawmakers not bringing up any complaints, committee chairperson Laxman Lal Karna informed Mishra about these and asked for Mishra's clarifications .

In his response, Mishra claimed that the judiciary doesn't work under any political influence or pressure. He added that judges take their decisions on the basis of law and precedent.

CJ Rana insists on increasing number of judges at all courts

Why are most corruption cases before SC postponed?