With 3 upcoming fairs, busy time ahead for Dhading businesses 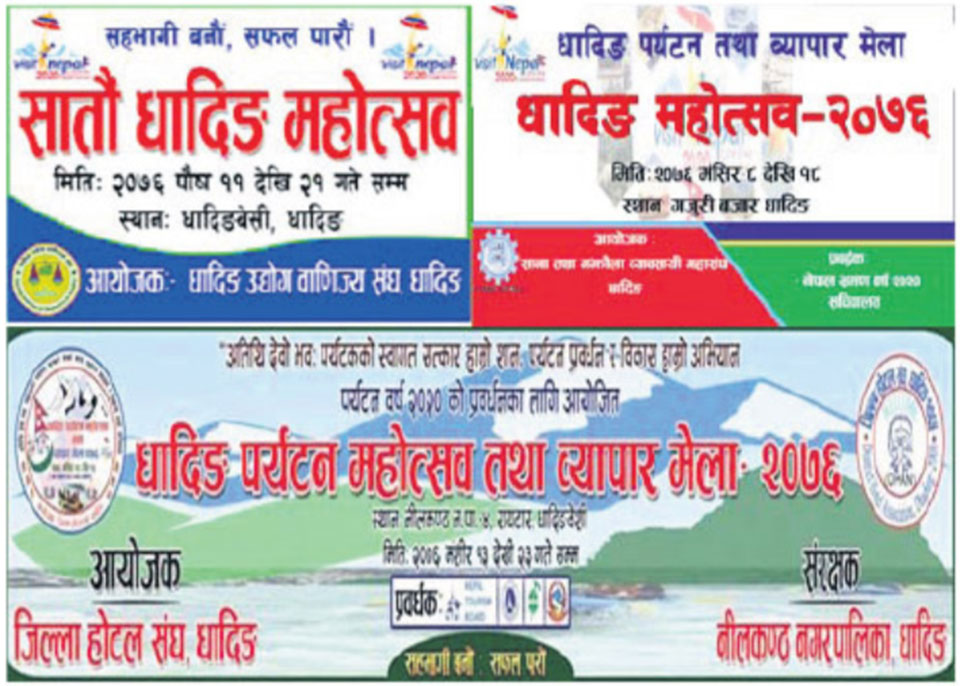 DHADING, Nov 12: With three fairs and exhibitions in the pipeline for the next two months, Dhading entrepreneurs are really looking forward to promote their businesses.

The fairs related to agriculture, trade, and tourism are being organized after the end of Dashain, Tihar and Chhath festivals, when people have some respite from their routine busy schedules.

The organizers have said these upcoming events would be good opportunities for local businesses to showcase and promote their products and services. They said the three fairs were planned also to support the Visit Nepal Year 2020 campaign.

The hotel association had organized similar fair at Rayatar of Nilkantha Municipality-4 last year as well. At the moment, it is running promotional campaigns for this year's event.

On the other hand, the Dhading chamber started organizing fairs in 2007. The upcoming fair will the seventh event organized by the chamber.

Likewise, the FNCSI has started promoting its fair entitled 'Dhading Tourist and Business Fair', to be held at local Gajuri Bazaar. According to the federation, organizing fairs near the highway would make it easier for people to attend the events. Gajuri Bazaar lies on the Prithvi Highway. The federation had organized similar fair for the first time in 2007 at Dhading Besi of the district.

Locals say that over the past decade, it has been their experience that the fairs have been platforms to compete to promote business, organize cultural activities, and earn money.

According to Chandra Kant Adhikari, former chairperson of the FNCSI Dhading Chapter, fairs and festivals should be held in a way to promote the district's unique identity and culture. “However, fairs have become forums to exercise political interests and business competition these days.”

Different associations and co-operative organizations organize fairs and festivals round the year. Among them, the first Majhimtar Fair organized by the Highway Sports Club earlier this year was noteworthy.

Among many such fairs in the past years, Dhading Chamber had organized Central Region Fair and Fourth Dhading Festival at Dhading Besi in January 2014. In 2017, Thakre Rural Municipality had organized first Mahadebesi Mini Festival.

In February 2018, District Hotel Association had organized Dhading fair in Dhading Besi. The profit from fair was said to be utilized in buying ambulance, but it is still pending. In the same year, Ujyalo Bhabisya Mahila Group had organized industrial and business fair at Mahadevbesi.

Germany looking for efficiency against Portugal at Euro 2020