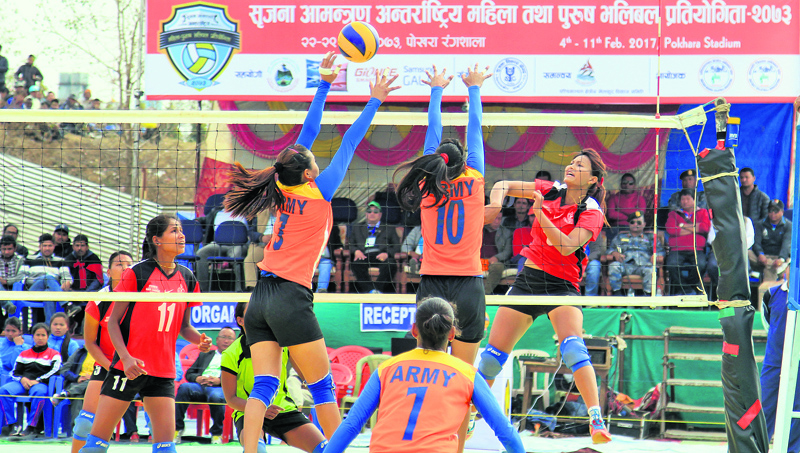 Players of Tribhuvan Army Club (orange) and Armed Police Force in action during their match of the Srijana Invitational International Men’s and Women’s Volleyball Tournament at The Pokhara Stadium in Kaski on Monday.

In the matches of the women's category played at Pokhara stadium's volleyball court, APF defeated Tribhuvan Army Club in the straight sets of 3-0 and Police thrashed visiting team Uttar Pradesh Volleyball Association (UPVA) of India, with the similar score line of 3-0.

APF who had faced defeat to the Army in the men's category on Saturday, took revenge registering a win of 25-9, 25-17, 25-18 over the departmental rival. APF which was studded with five national players didn't allow Army to win any set in the match. After the match, APF's head coach Prakash Thapaliya said that his women's team is very strong in comparison to men's team.

"We had faced defeat to Army in the men's category but we pull the victory against them in the women's category as this team is very strong due to the presence of key national players," said head coach Thapaliya. Saraswati Chaudhary, Nebika Chaudhary, Binita Budhathoki, Usha Bista and Reshma Bhandari are regular national team members playing for APF.

"We had defeated Army in the Dhorpatan Cup, we did again preventing it from making more than 20 points," further added Thapaliya.

Our team will be much stronger after one year or so," said head coach Bhatta. He also said that spike of his team is weak and that affected the result. "Spike is the main source of the points in the volleyball but my players performed poorly in that department," ended Bhatta.

In the second match of the day, Police eased past Indian opponent UPVA 25-7, 25-20, 25-16. Police gathered an easy win in the first set but had to fight hard to win the remaining sets as UPVA had created lead in the both sets. In the second set, UPVA had led until the 15 points and 11 points in the second and third sets respectively.

"We were unknown about the opponent so we had no idea about their playing style and level of the team. After watching the first set we set strategy accordingly so despite getting trailed down, we succeeded to pull the victories in the remaining sets," said Police's head coach Bharat Shah. He also informed that the departmental team has three new faces which have played just two-three games until now. Kamana Bista, Pushpa Chaudhary and Kopila Rana are the new players of the team.

"We have tried to create a coordination between new players and old guards in the team. Though new players were little nervous but playing them with experienced players will help them a lot," added Shah.

On Monday, host Western Region and APF will vie in the women's category.

Similarly, in the men's event, Help Nepal Sports Club and APF will battle in the first match and in the second match Police will take on Western Region.

Nepal sees 12.6 percent rise in remittance inflows in the first quarter
13 hours ago