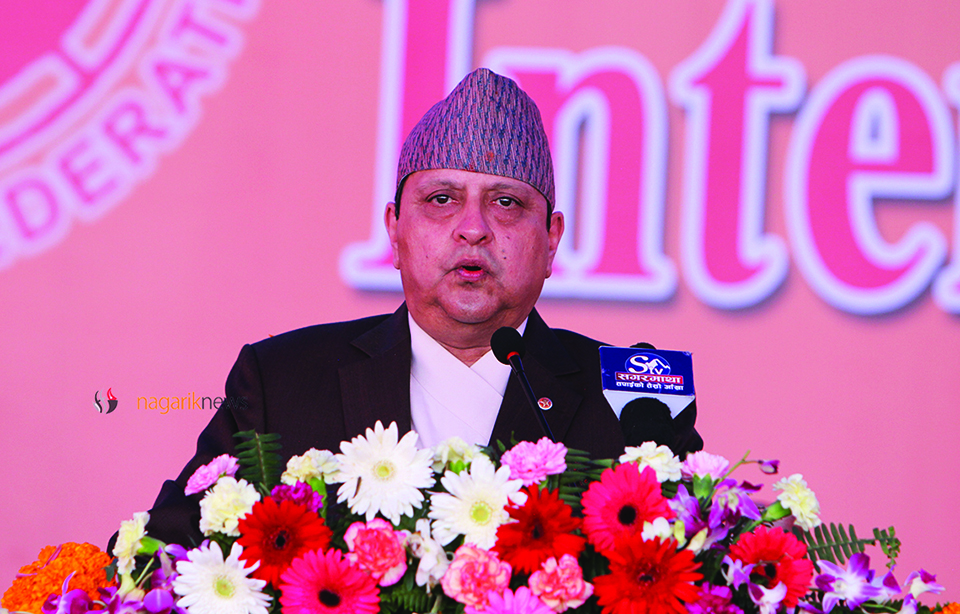 Talks continue on giving monarchy some space in the spirit of the 1990 constitution. India, China and the US have discussed this issue in twos but not collectively

Shortly after Prime Minister KP Oli dismissed the talk of monarchy’s return as the brainchild of an imbalanced mind, former King Gyanendra left for a visit to the central region in February this year. Does the return of constitutional monarchy loom large on the horizon? Recent developments and subtle diplomatic moves offer some cues.

Nepal’s three-year-old fling with a secular federal republic attracts a far-from-flattering spotlight. Promises of sweeping changes made since 2006 are being questioned and debated. When the former king reached the domestic wing of Tribhuvan Airport for his trip, security personnel were excitedly briefing their superiors about the “unprecedented send-off”. An equally enthusiastic welcome awaited the VVIP at Biratnagar. In Jhapa, however, the reception was less enthusiastic, though the district accounted for Kamal Thapa-led RPP’s second largest concentration of votes for proportional representation in the second Constituent Assembly polls. RPP’s General-Secretary and only member of the federal parliament, Rajendra Lingden, did not meet the former monarch in Jhapa.

Lingden won a parliamentary seat, with Left Alliance backing, though his party had an electoral tie-up elsewhere with Nepali Congress-led Democratic Alliance. The West, strongly against a communist government even if elected through a democratic process, views Nepal as a fertile ground for an ideological raid on China through Tibet. RPP’s patrons were advised against any broad electoral pact with Left Alliance.

The forces that steered Thapa away from the Left Alliance will leave no stone unturned to topple the Oli team. Reeling under its 2017 disastrous electoral performance, a growing section in the non-communist bloc is assessing the debilitating effects of having carried the Maoist agenda of a secular federal republic. Reversing the current course would, in their assessment, be a big blow to the communists.

Communist leaders like Chitra Bahadur KC, Narayan Man Bijukchhe and Bidya Devi Bhandari were at some point critical of federalism. In August last year, Nepali Congress leader Bimalendra Nidhi accused Oli of seeking Chinese support to “derail federalism”. When then Maoist supremo and Prime Minister Pushpa Kamal Dahal was compelled to resign after President Ram Baran Yadav overruled his sack order against army chief Rookmangud Katawal, he reportedly confided to his close circle: “If need be, we should go for restoring the king rather than allowing India to blatantly intervene in our country’s internal affairs.”

Dahal made overtures to the former king through three former prime ministers of Panchayat era—Tulsi Giri, Kirtinidhi Bista and Marich Man Singh Shrestha. But Nirmal Niwas had deep doubt about Maoist’s “reliability”.  Previously, some mainstream parties floated the idea of baby King, which King Gyanendra immediately rejected. Girija Prasad Koirala, his daughter Sujata Koirala and then Maoist leader Baburam Bhattarai spoke of some form of monarchy, echoing proposals being debated behind the curtains. At least two INGO-commissioned surveys, withheld by their disappointed sponsors, showed most Nepalis are in favor of retaining a Hindu state with monarchy.

Khum Bahadur Khadka was close to gathering momentum in his Hindu state agenda. Now there is stiff competition in Nepali Congress to inherit his legacy. A highly respected Kul Bahadur Gurung is openly unhappy with constitutional provisions that do not synchronize with the party’s long-established ideals. Sashank Koirala and Sekhar Koirala are said to be reviewing the “achievements” of 2006 movements. Laxman Ghimire, Anand Dhungana, Omkar Lal Shrestha, PL Singh and Haribol Bhattarai are said to be nostalgic about 1990 constitution.

The emergence of Nepal Communist Party (NCP) on May 17 has led Nepali Congress and its partners in Democratic Alliance to devise a new and effective strategy to counter “the emerging authoritarianism that talks of ruling for the next 50 years”. Likewise, the three RPP strands have come to share a common stance on monarchy and Hindu state. RPP (Democratic) President Pashupati Shumsher Rana’s recent political paper upheld Hindu state and monarchy and was approved without any amendment. Almost all speakers among 100 members endorsed the idea. Prakash Chandra Lohani’s party, too, is said to be in agreement with this.

Furious over the former king’s regional visits, Baburam Bhattarai wanted him arrested. A strong public backlash led the maverick Maoist-turned-non-communist leader to recoil. The same Bhattarai who, either prodded by his patrons or of his own volition, paid a visit to the former king who was hospitalized. Last year, as home minister, Bimalendra Nidhi seethed with anger over the former king having “crossed limits by politicizing” his visits to temples. He threatened: “If this goes on, the royal massacre file should be reopened in a new way.” His outburst became the butt of ridicule in the news and social media.

Unruffled, the former king often visits various regions and meets cross-section of local leaders. He does more talking now than previously but keeps the core detail close to his chest. Visitors at Nirmal Niwas and Nagarjun are advised: “Let bygones be bygones.” He is “very relaxed, down to earth and comments more these days than previously”. At family dinners, he is “completely a transformed man”, says an impeccable source. Last year, the former king attended the wedding ceremony of President Bidya Devi Bhandari’s daughter. Bhandari reciprocated by attending former Prince Hridayendra’s sacred thread-receiving ceremony. Was all this stage-managed for some long-term eventuality? Who played the conduit for the groundwork?

In winter, the former king had a session with RPP leader and Nepalgunj Mayor Dhaval Shumsher Rana, who had organized local leaders of various mainstream parties in the welcome line-up. Kamal Thapa, while serving as deputy premier in Sher Bahadur Deuba’s great cabinet, had a brief but exclusive audience at Nepalgunj. The former king’s subsequent visit to the eastern region in March included a three-hour meeting for “candid and clear” views on current political events with second rung leaders of three RPPs. He later hosted a dinner at Nirmal Niwas to a select group, including former Prime Minister Lokendra Bahadur Chand, Pashupati Shumsher Rana and Prakash Chandra Lohani.

Indian Prime Minister Narendra Modi feels uneasy about not yet having fulfilled an undisclosed commitment made to the former king: “At this stage, how can I show my face to the Maharaja?” This year, the context in which the former king attended a program in Lucknow at the invitation of Modi’s trusted Uttar Pradesh Chief Minister Yogi Adityanath, along with his presence at a religious function in Orissa, suggests something significant might be brewing.

Highly venerated in India, Shankaracharya Nischalananda Saraswati in May had a meeting with the former monarch at Birgunj, where he suggested that Nepal should revert to monarchy and Hindu state. Earlier, Shakanracharya was feted with a civic reception in Kathmandu addressed by Prime Minister Oli. He was given a civic reception also in Chitwan, Pushpa Kamal Dahal’s home constituency. A few days later, the former king was accorded what is widely believed to be the biggest welcome since 2005 in Rautahat, whose reports surprised Tarai-based leaders like Rajendra Mahato and Upendra Mahato.

Former Crown Princess Himani visited Beijing four times in less than three years—the first time as the head of the Trust named after her. Subsequently, she accompanied her father-in-law who met with President Xi Jinping’s top foreign policy advisor and Politburo member Yang Jiechi and, in the last trip, is believed to have met with Xi himself. The daughter-in-law was present on all occasions.  Nirmal Niwas remains tightlipped on what transpired in Beijing. Ai Ping, who looks after South Asian affairs and speaks fluent Nepali, met with the state guests from Nepal several times.

Beijing does not casually invite someone who represents an institution denigrated and curtly abandoned by political parties. At a reception hosted by the Japanese ambassador, the former king’s daughter-in-law Himani, when introduced by the host to Chinese ambassador Yu Hong, was overheard saying: “Ambassador, I have something to share. My secretary will contact you.”

Chinese leaders are reminded of their emphasis on “all-weather friends”, though they failed to appreciate King Gyanendra’s proactive role at 2005 Dhaka SAARC Summit in securing observer status for China, shortly after which Nepal’s seven-party alliance and Maoists signed a 12-point accord under New Delhi’s supervision to fight against “King’s dictatorship”. However, Chinese ambassador-designate presented his credentials to Prime Minister Girija Prasad Koirala when the country was still a constitutional monarchy. Beijing’s defense: “If that had not been done, what might have been the repercussions, with foreign forces on high alert for military intervention in Nepal?”

Prior to being elected president, Indian Congress leader Pranab Mukherjee briefed an influential Nepali on the Indian government’s crucial support to the Maoists during their “People’s War” but complained they “never support us”. The Bengali Babu, who was then ruling party’s point man to hold discussions with South Asian leaders, including Oli, rued: “After all they are communists.” India got the shock of its diplomacy in last year’s electoral defeats of the Nepali Congress troika—Bimalendra Nidhi, Krishna Sitaula and Sekhar Koirala, identified by New Delhi as understanding “Indo-Nepal interests” the best.

The unpredictability of political parties has led Beijing and New Delhi to feel the absence of a stable and credible institution in Nepal, as the world economy shifts to Asia. The two giant neighbors seem to see space for the return of the monarchy for political stability and balanced foreign policy. Former United States Secretary of State Henry Kissinger, during his last India visit, spoke to a well-connected and high-heeled Nepali: “The Ranas and King Mahendra knew Nepal’s geo-politics and strategic interests the best.”

Talks continue on giving monarchy some space in the spirit of the 1990 constitution. India, China and the US have discussed this issue in twos but not collectively. Recent indications of a turning point in better Sino-Indian ties are significant against the background of the West seeing Nepal as comparatively the most convenient ground for an ideological raid on communist China through “Free Tibet” movement.

During his one-on-one meetings with Oli in New Delhi and Kathmandu, Modi gave the gist of his latest talks President Xi Jinping. In between the exchange of these two visits, Modi briefed Xi on what he told Oli.

In short, Nepal figures in the talks at various levels between New Delhi and Beijing. Washington, too, is getting reconciled to the monarchy’s return as an option if Nepal’s immediate neighbors press for it. The Japanese, typical of their quiet diplomacy, nurse a soft corner for the institution of monarchy in Nepal. Western capitals are closely monitoring the militant activity of the communist group led by Netra Bikram Chand. His workers in uniform not long ago held a flag march in Kavrepalanchowk. Oli’s warnings against activities that threaten law and order are directed at the Biplav group which has developed networks and hideouts quite different from those built during the decade-long Maoist war.

Is this all a pipe dream? The analysis based on indicators minting the monarchy for a new innings simply follows the behind-the-scene trail of talks. The aforementioned series of going-ons constitute a compellingly interesting and meaningful pattern.