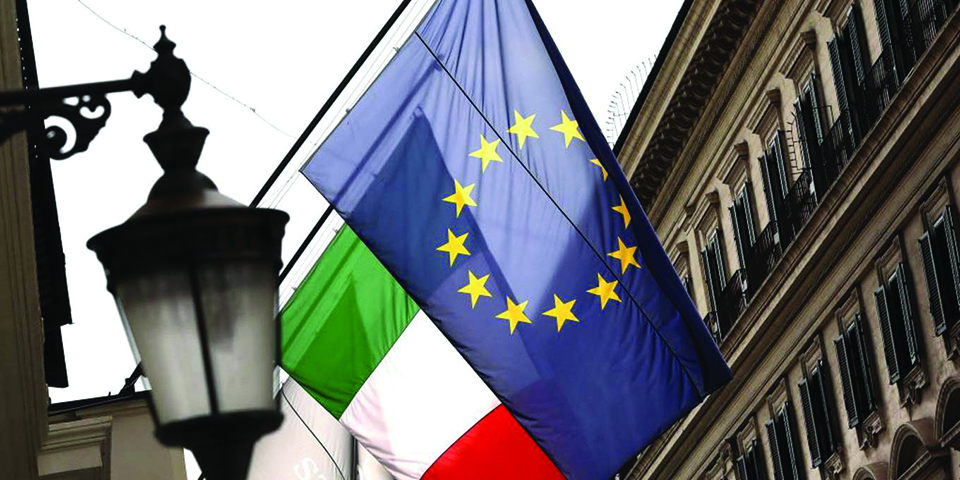 The European Commission, the European Central Bank, and the German government have erred in insisting on rigid enforcement of the EU Stability and Growth Pact, particularly the three percent of-GDP cap on fiscal deficits

LONDON – Despite political turmoil and emerging risks at the global level, the eurozone has had two years of strong economic growth, at least by its own historically disappointing standards—and even with the United Kingdom lurching toward withdrawal from the European Union. But with the emergence of a populist government in Italy this year, it is no longer safe to assume that the eurozone’s worst days are behind it.

Italy was the first country that I studied when I entered the financial world back in 1982, so I have a special affection for it. I was working for a very large American bank at the time, and I can still remember joining frequent transatlantic conference calls to discuss Italy’s debt-to-GDP ratio. The question on everyone’s mind was when the country would default; but it never did. Instead, Italy muddled through, and has continued to do so ever since. Still, now that the Italian government seems poised for a standoff with the EU, it would not be surprising if worries about a default were to re-emerge.

As my experience more than 30 years ago shows, Italy’s economic problems far predate its adoption of the euro. It has long had poor productivity by European standards, and that translated into relatively low trend growth in the pre-euro decades. At the same time, occasional spurts of faster growth regularly sowed the seeds for various crises, often resulting in devaluations of the Italian currency, the lira.

Of course, there are some who now yearn for the days when the lira could be weakened to restore growth. That is no longer an option under the single currency. But what the pre-euro romanticists overlook is that euro membership has given Italy low inflation, and thus lower interest rates. Moreover, there is reason to think that lira devaluations did more harm than good. Even if they offered an occasional competitive boost, they stood in for tougher structural reforms that would have increased productivity over the long term.

There are also some who believe that the eurozone’s fiscal and monetary framework locks Italy into weak nominal GDP growth, possibly too-low inflation, and high debt. Yet before the new government took office, Italy’s cyclically adjusted fiscal deficit—as opposed to its underlying debt position—was often rather restrained compared to the rest of the eurozone, as well as the other members of the G7 (Canada, France, Germany, Japan, the United Kingdom, and the United States).

Still, the mainstream political parties that governed Italy until this year did not deliver the nominal GDP growth that the country needs. As a result, Italians elected an unconventional coalition whose program combines the policies of the populist left with those of the populist right. While the League party promises to cut taxes, the Five Star Movement (M5S) is pursuing a form of basic income.

But what Italy needs is a broad structural reform program to improve productivity. That is the only way to achieve a higher long-term growth rate, given the country’s demographics. In addition to enacting policies to boost the labor-force participation rate among women, Italy must provide more attractive opportunities for its young people.

For its part, the EU should do more to help Italy take the tough steps it needs. The European Commission, the European Central Bank, and the German government have erred in insisting on rigid enforcement of the EU Stability and Growth Pact, particularly the three percent of-GDP cap on fiscal deficits. Although some countries have been allowed to breach the deficit cap during challenging times, Italy is almost never afforded much accommodation, owing to its high debt levels. Yet as the experience of Belgium and Japan shows, high government debt can be reduced only through sustained economic growth.

Complicating matters further, some reforms to boost long-term productivity can actually reduce growth in the short term. Thus, any government enacting such measures will need to have the option of pursuing counter-cyclical stimulus.

Another problem concerns monetary policy. The ECB could stand to be more broad-minded in how it pursues its inflation target of just under two percent. That target, along with Germany’s own two percent target, leaves Italy locked into a state of low inflation, even when it could benefit from more monetary-policy stimulus.

Under these conditions, the EU authorities would do well not to oppose the current Italian government’s plans too aggressively. If mainstream liberals are worried about the implications of a democratically elected populist government, then they should worry even more about what could come next if economic circumstances worsen. At this stage, Italy needs stronger nominal GDP growth—plain and simple.

Some will say that it was a mistake to have allowed Italy into the eurozone in the first place, and that an optimal currency zone should have been more discriminating in its membership. But the German and French business communities insisted that the monetary union must include some of Italy’s more competitive companies. And once Italy was considered eligible, so, too, were many other countries.

At the end of the day, those with the power to set and enforce EU fiscal and monetary rules know full well that the eurozone could not survive a Greek-style crisis in Italy. It is their responsibility in the months ahead to make sure it doesn’t come to that.