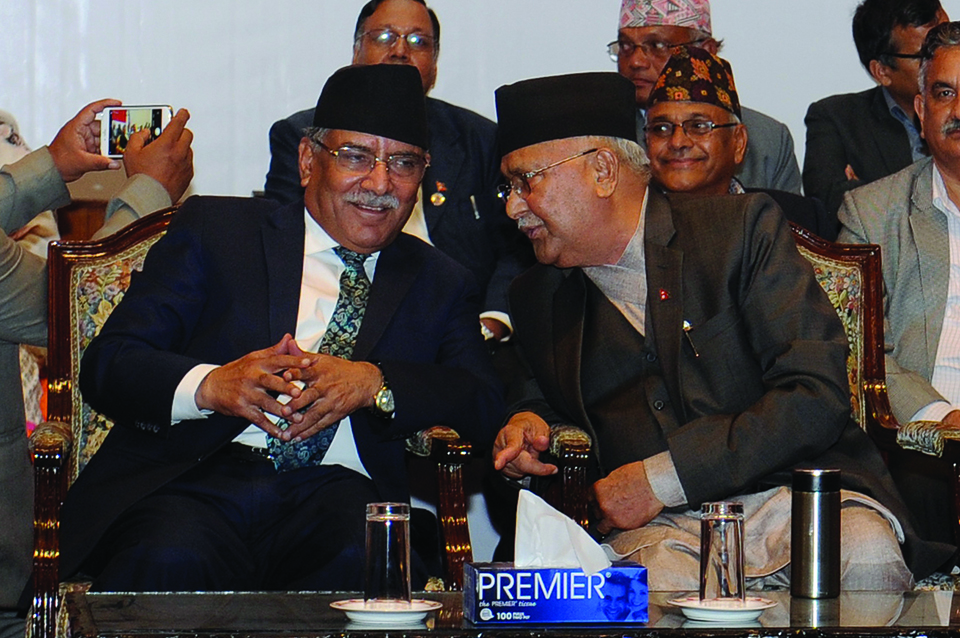 There is expectation that communist unification will lead to an age of strong and stable government. Is this really going to happen?

In one of my previous columns I compared communist unification with bhyaguta ko dharni puryaune (making tonne out of frogs) epigram (see “Will it fly?” Republica, January 31). With the formal announcement of much hyped CPN-UML and Moist  Center unification last week, there is a feeling of deja vu in the left camp. There is now a greater expectation that the unification will lead to an age of strong and stable government in Nepal. Pushpa Kamal Dahal, the main architect of the unification process, has asserted that this is an end to the politics of uncertainty and instability hovering over the sky of the country. Is this really going to happen? My own conclusion: This is very doubtful. If my prediction comes true, we will soon see the arrival of versatile, opportunistic frogs briskly jumping in and out of the weighting scale.

There was uproar of clapping from the audience, when Dahal said unification is like molecule fusion of hydrogen and oxygen to form a life giving substance called water. Definitely, a newly formed political outfit called Nepal Communist Party (yet to be approved by the Election Commission) is not just the combination of CPN-UML and Maoist Center. It should be more than that. No one can disagree with his scientific, albeit, a school level explanation. But we still have to wait and see what happens to this H2O or water politics. Will it flow downhill along with rastrabad or seek to maintain its level?

No one can also refute doctor pilot’s explanation. This is not like driving a three wheeler tempo, you need two pilots to fly a jet plane, Prime Minister K P Oli said. But one should remember that in nature, you rarely find a two headed animal. Even if you find one, besides discomfort, the longevity is questionable. The discomfort of having two heads is clearly visible from a picture of two leaders occupying a single table at the party headquarters with their names typed in different font sizes plus one being designated as “chairperson of Kendriya (central) committee” and other as “Chairperson of “Kendriya Samitee.” The picture reminds me of a unique natak that transpired during Panchayat days: After playing football matches, three consecutive rounds between the teams representing Nepal Police and the then Royal Nepal Army at Dasarath Stadium. At the end, the organizers decided to declare both teams as joint winners—allowing each team to hold trophy for six months. This is the reason why foreigners call us a unique country. Glad that there is no such index like Global Laughing Index. Otherwise we would have topped the ranking.

Comrade Dahal’s much acclaimed demand for party unification based on the principles of justifiability, respectability and equity seems to have boiled down to a single factor, that is, assurance for a premiership after three years. Therefore, the assumption that we are having a stable government is very much in doubt. This is further explained by allocation of 45 percent share of Central Committee members to the Maoist Center in the newly formed party. This is essentially a contingent measure kept safe for future party breakaway. The choice of the date for unification (the day for commemorating UML leader Madan Bhandari) is also an indicator of CPN-UML absorbing the Maoist Center rather than what is being labelled as the fusion of H2O. UML leader Pradeep Nepal has appropriately called this “the end of Prachanda”.

Having questioned the stability factor, let us look into the strength factor. Definitely, the united communist party holds a comfortable majority in the parliament. The two-third majority is a matter of simple calculation, the leaders are now eying for a three-fourth majority in the next rounds of elections. The strength of the government does not lie in quantity but in quality—that is delivery and performance. So far, even after completing honeymoon period, other than hollow and shallow promises, foreign junket visits, inaugural speeches and media stunts, the government has virtually delivered nothing. Nothing perceptible change could be observed with a loud mouthed motto of “Prosperous Nepal, Happy Nepali”. Translated in reverse, it implies poor Nepal and sad Nepali.

Finally, let me remark that the real strength of the government lies not in the number, not in the performance, but with or in the health of the Prime Minister. That must be the reason why we are seeing the PM participating in a half marathon race organized by a media group.