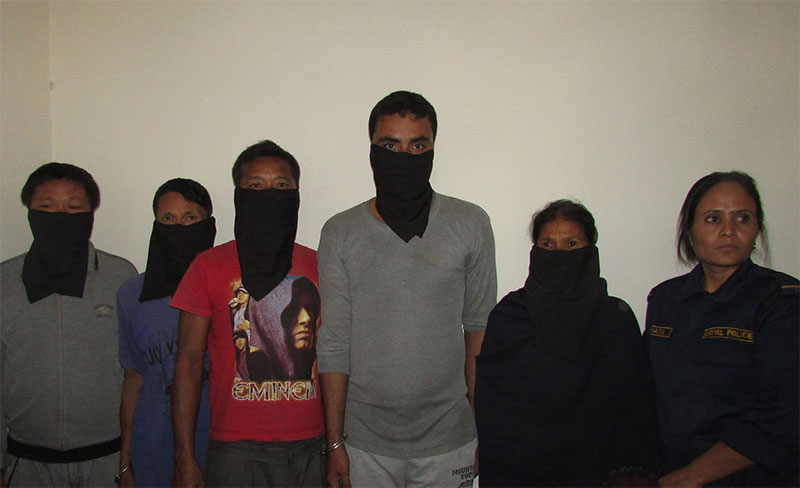 SARLAHI, Nov 8: A woman has killed her husband with a khukuri for marrying another woman in the district.

Masti Maya, 45, of Hariwan-5, Sarlahi, has killed Man Bahadur Ghising, 50, for bringing in a step-wife.

She killed Ghising with the help of two neighbors and sons-in-law.

According to Superintendent of Police (SP), Uttam Raj Subedi told Republica Online, Ghising was hacked to death while he was working in a vegetable farm. Police arrested Dema Dorje, 47, Mohan Prasad Phuyal, 31, Bikuram Waiwa, 37 and Kale Bahadur Waiba, for their alleged roles in assisting Maya in killing her husband.

Confiscated khukuri and other materials

Police have confiscated the sickle and khukuri allegedly used for killing Ghising.

“Ghising was a ranger in a community forest, Subedi said,” adding, “we identified the reason behind killing Ghising and the people involved in the killing after a one-month-long investigation.”

“The main reason for the murder was deteriorating relationship between husband and wife,” added Subedi.

Subedi said that a further investigation into this case is underway.

Man Bahadur of Hariban-5 is a middle-class farmer. He was also working in a community forest as a ranger. Seven years ago, he had married Tabi Maya Ghising as a second wife. But, their relation couldn’t last for many days.

On October 7, he was murdered by his first wife while he was working in a vegetable farm after their relation deteriorated.

She attacked Ghising on the back with a khukuri while he was working in a vegetable farm.

She was so angry with her husband that she attacked him on the neck even after Ghising fell onto the ground.

LAHAN, June 27: A man has killed his wife with a sharp weapon in Bhagawan Rural Municipality in the Siraha... Read More...