Why so elaborate fool-proof security for Modi? 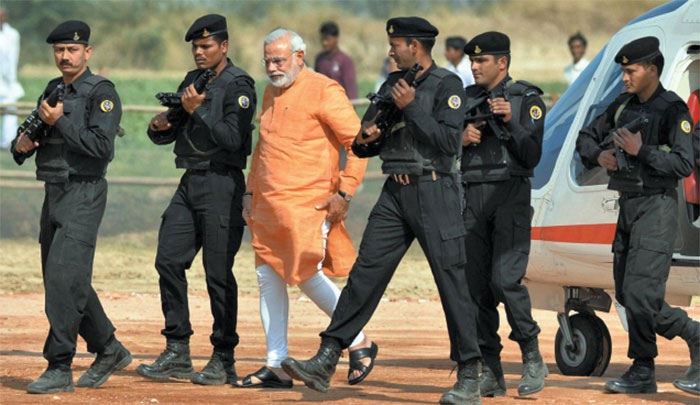 Four days before his Nepal visit, security has been beefed up in Kathmandu while as many as 41 Indian security personnel along with two bullet-proof cars (a Range Rover and BMW) landed at Tribhuvan International Airport on Tuesday.

This is PM Modi’s third visit for Nepal after becoming the 16th Prime Minister of India. For the first time, Modi came to Nepal on 3-4 August, 2014, when Nepal was undergoing acute labor pain for promulgating a federal constitution. For the second time he visited Nepal on 26-27, November, 2014, on the occasion of the 18th South Asian Association for Regional Cooperation (SAARC) summit.

According to sources, more than 10,000 security personnel including Nepal Army, Armed Police Force (APF), Nepal Police and Central Investigation Bureau (CIB) will be deployed for the security of PM Modi under the command of Nepal Army.

In 2014, only a few plainclothes security personnel came along with Modi for his security. The Nepal government had given high priority to Modi’s security, said former AIG Kedar Saud.

Saud further said that the Indian government may recognize the need of security due to threat of anti-Indian movement during the Nepal blockade in 2015.

A fool-proof security has been arranged for Modi, as always, by the communist-led government to apparently be soft on the southern neighbor, as part of foreign policy.

India thinks that the communist government is always lenient toward China but this government is trying to make the southern neighbor feel that Nepal is maintaining age-old friendly ties with it.

With the Indian security force entering Nepal in their dress code four days before Modi’s Nepal visit symbolically shows that Nepal is weak and that India wants to maintain its influence over Nepal in many ways, said political analyst Purushottam Dahal.

India thinks that Nepal is influenced by China and India wants to deliver the message to the International community, especially to China, that its influence continues unabated over Nepal. It appears that India wants to make Nepal always dependent on it.

So, this type of elaborate and showy security has been arranged for Modi’s imminent Nepal visit at the behest of India itself.

Commenting on the fool-proof security being arranged for Modi, Dr Khadga KC, Professor of International relations, said, “India does not tolerate Nepal making good ties with China. Secondly, Modi wants to create impression to convince Indian citizens that his government is successful in building international relations before the upcoming provincial elections in India.”