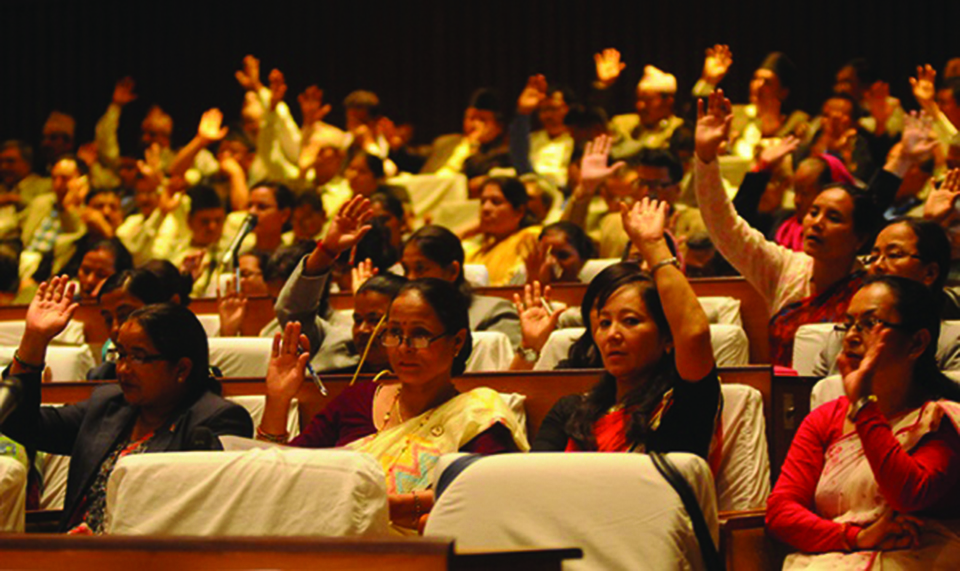 In an interview on May 21, 2018, former Prime Minister and co-chair of Nepal Communist Party Pushpa Kamal Dahal told Fireside that “for the rapid development and prosperity, even now, I aspire for the directly elected executive chief.”  Few days later in a program in Pokhara, he and one his coalition leaders reiterated readiness to go for  presidential system for stability and rapid development.

This comes at a time when after all arguments made and debated, constitution written by people’s representatives and promulgated through the Constituent Assembly on September 20, 2015, is in course of implementation. Article 74 of the constitution provides that “the form of government of Nepal shall be multiparty, competitive, federal, democratic, republican, parliamentary form of government based on pluralism.” The inclusive democratic document is the culmination of seven decades of arduous efforts and immense sacrifices of Nepali people for democracy and better life.

Elections to three levels—national, provincial and local levels—have been held, governments formed at all levels with single party leading the majority in many years. With the induction of Federal Socialist Forum, Nepal led by Upendra Yadav, the government has two thirds majority in the Parliament, and all seven provinces are controlled by the ruling parties.

Communists and some liberal democrats had flirted with the idea of executive presidency during the constitution making process. But what is worrisome at the moment is that this campaign has been revived by ruling party leaders when people have clearly spoken and given their mandate for parliamentary system for stability and prosperity. What obstructs the leadership from providing good governance to accelerate development?  The issue of executive presidency at this time runs contrary to top leaders’ stated positions that political course has been settled and pressing priority of the moment is development.

The way Prime Minister K P Oli is concentrating powers in his office, it seems ruling leaders do not trust prime ministerial system. Elected representatives, as Argentine political scientist Guillermo O’Donnell wrote: work to deconstruct and reconstruct political institutions, mostly through constitutional means, to consolidate and concentrate their own power and become “delegative democrats.” Delegative democrats overreach the institutions of checks and balances. World history is replete with examples of elected representatives running systematic efforts to dismantle the democratic political system and consolidate powers.  Government’s pardon to a Maoist leader serving life term stands as a challenge to rule of law, human rights and independence of judiciary. These initial developments are indicative of ominous trends for parliamentary democracy with checks and balances.

A cursory look shows global populist wave is spreading along with the rise of identity politics, radicalism and people’s disillusionment with the current order. Amidst rising global turmoil, instability and insecurity, political forecasts suggest the world is likely to become increasingly turbulent over the next 10 to 20 years. The trends span through autocracies to democracies. Political narratives revolve round the elements of nationalism, nation first, national glory and rejuvenation, development, and stability for prosperity among others. Those operating in democratic system develop the concept of ‘decisive leadership’ with a distinct dose of nationalism and development.  They all give the notion of strongman leadership in the making.

Strongman leadership is causing erosion of democratic norms. Space for dissent is shrinking and dissenting voices are being penalized. This leadership promotes personalism in governance, persistently puts pressures against institutions of checks and balances, weakening all rival influence and power centers. Institutions are subordinated to personal instincts and whims. Diplomacy carries personal ego craving for revenge.  Truth, facts, and integrity fall prey to personal views, whims and wishful thinking of leadership.

Former US Secretary of State Rex Tillerson in his address at Virginia Military Institute on May 16, warned against what he called “a crisis in ethics and integrity” in governance and business and said: “If our leaders seek to conceal the truth or we as people become accepting of alternative realities that are no longer grounded in facts, then we as American citizens are on a pathway to relinquishing our freedom.” These remarks speak volumes about the trends that are in motion around the world.

Pluralism and inclusiveness have been the core components of Nepal’s democratic transformation. The constitution provides for an elaborate set of 31 fundamental rights. It ensures at least one third of membership in national and provincial parliaments to women, and gender balance in top constitutional positions including that of president, speaker and their deputies. Forty percent of parliamentary seats are allotted on a proportional basis to redress under-representation of minorities and marginalized.  Peaceful transfer of power through elections is most important feature of democracy, as exemplified after 2017 elections in Nepal.

The debate on directly elected presidential system demeans, disdains and denigrates people’s mandate and democratic achievements. It seeks to negate functioning of democracy. We have had enough of “grand designs,” unexplained.  It is time to look beyond the obvious and seek truth from realities. The interests of neighbors and extra-regional powers have never been closer and stronger in Nepal. The incessant ploy to put the nation of a highly sensitive strategic location with fragile geopolitics, on repeated political experiment and endless transition is to make it vulnerable. This ignores all lessons from history, paving the way for making Nepal a laboratory for outsiders’ delight.

Hillary Rodham Clinton, the first woman in US history to become the presidential nominee of a major political party and lose presidential elections despite having received three million more popular votes than the winner, wrote in her latest book What Happened: “Women leaders around the world tend to rise higher in parliamentary systems, rather than presidential ones like ours. Prime Ministers are chosen by their colleagues -people they have worked with day in and day out, who have seen firsthand their talents and competence. It is a system designed to reward women’s skill at building relationships, which requires emotional labor. Presidential systems are not like that.”

Democracy, as Winston Churchill said, is the worst form of government except for all the others. And the last best hope of earth, as Abraham Lincoln called it, is subject to the threats of corruption, illiberalism, identity politics, jingoism and personalism.  In this age of unprecedented social awakening and transformation, no system can succeed by itself. It needs visionary leaders to extricate the country from the scourge of instability and disorder by consolidating the democratic system. What is needed is sincere and hard work in harmony to forge national unity, preserve democracy, prevent social distortions, ensure inclusion and social justice, make a difference, accelerate development process and solve pressing problems by building, rebuilding and strengthening country’s weakened, and degraded institutions within the framework of democratic pluralism.

Sudurpaschim Province Assembly meeting postponed to 4PM today
45 minutes ago
One arrested with Rs 900,000 of undisclosed source
47 minutes ago