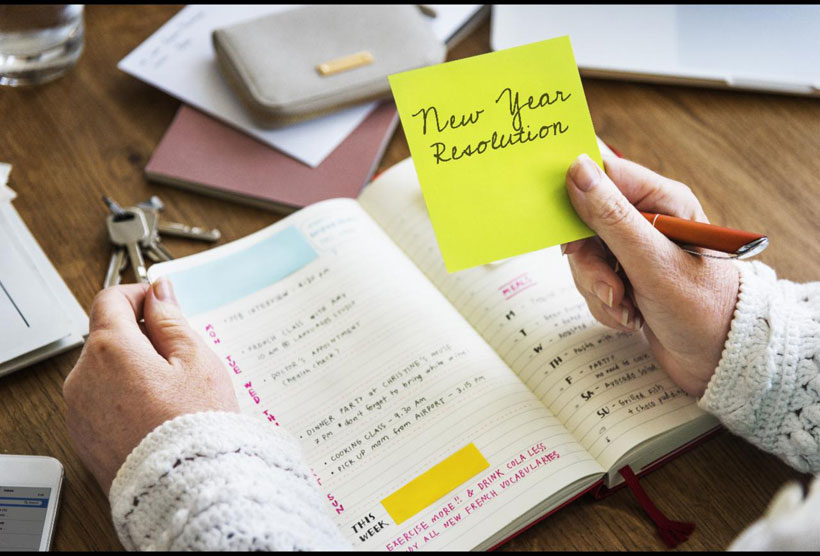 When I was a kid, the only time I wasn’t told to go to bed early was during New Year’s Eve when my parents would stay up till midnight with a few of their friends who had been invited over for the celebrations. I also remember the first time my father asked me to make a new years resolution. Actually, he was the one who made it for me: I was to wake up early and study a little bit of maths for at least an hour before school every morning. I must have been around 10 years old. Two weeks later, I was back to getting up with just 15 minutes to spare before I had to reach the bus stop which was a five-minute walk away from home.

A couple of years later I started making New Years resolutions on my own. For the first few years, it always had to do with waking up early, studying a little extra, participating in debates (I was really poor at public speaking, and stumbled over words on stage), and generally bettering myself academically. I only participated in a debate once, almost never took studies seriously, and only started waking up early quite recently. As I grew older, the resolutions kept changing but the one thing that didn’t change was the fact that I sucked at making my resolutions stick for more than a week or two.

And this happens with everyone, year after year. January 1, we start off determined to follow through on everything on that list of New Year’s resolutions we have made. Excited and energized, we think that this year will be different from the last, when our resolutions went by the wayside. The allure of starting from scratch, wiping the slate clean and beginning again is why we make resolutions in the first place. But come February or even mid-January and the majority of us have already abandoned our goals altogether.

A few years ago, Time magazine named the joint goals of losing weight and getting fit as the most commonly broken New Year’s resolution. New Year’s Day comes and goes and unfortunately, so does your enthusiasm for the ‘new you’ that you were aspiring for at the end of December. The plans you jotted down in that cute little leather bound notebook you bought especially for New Years will be cast aside as you go back to your old ways of eating and yo-yo dieting.

I have done this so many times in the past that I’ve lost count. I have made fitness resolutions every new year, every birthday, every Nepali new year, and even on my mother’s birthday, thinking it was an auspicious time to begin something new and promising myself to stick to it. But such resolutions are doomed to fail right from the start because of one of the two reasons: a) they are overly ambitions or b) they are not very specific.

Every new year, I’ve always made goals like: Eat less, lose weight, go on a diet, etcetera, etcetera. Or my resolutions list has things like this: Lose 10 kilos in two months, don’t eat junk food, don’t eat out and so on. These kinds of either vague or over ambitious goals can never be carried out for long and I always find myself altering them or making new ones as the years progresses. The thing with resolutions, I have come to realize, is that while they look good on paper and you have every intention of following through, you can be sure you never will.  So this year I have decided to not make any resolutions. Let that be my 2017 resolution and I’ll be sure to keep at it.

For the last couple of years, I have been on a weight loss journey. From over 80 kilos to finally 50 kilos, I have come a long way. It’s been a series of hits and misses (definitely a lot more misses than hits) and if there is one thing I’ve learnt, it’s been this: You can’t make a strict goal (like most people tend to do during New Years) when it comes to your fitness and diet plans. You have to learn to adapt to what your body tells you along the journey.

I have made so many fitness resolutions and failed at every one of them that by now I have stopped making resolutions at all, especially in regard to diet and fitness. What I do though is make mini plans and keep modifying it as I embark on it. The flexibility helps you stay focused while allowing you the liberty to change and not feel guilty about not sticking to a strict plan. If you make less strict plans and allow it to mold according to your needs instead, you’ll find that you’ll actually follow it more. Human beings are strange creatures. We don’t like being bound by rules and laws yet every new year we make new ties for ourselves.

The New Year is almost upon us, which means for most it’s time to make a resolution or two. But this year, I’m definitely throwing the rulebook out of the window and setting on an alternative pathway. I have realized that there is no point in setting the same resolutions you’ve been setting for years on end, only to feel disappointed. Instead, I plan to give myself some breathing space with just one goal in mind: I will each day try and be a better version of myself.  At the end of the day, I should feel good about myself. And since setting resolutions has the opposite effect, I’m not going to make any in the first place.

The writer loves to read, have conversations, and sleep, in that particular order. She is on a mission to give up Fanta for life.

Why not: Kangana on getting married more than once