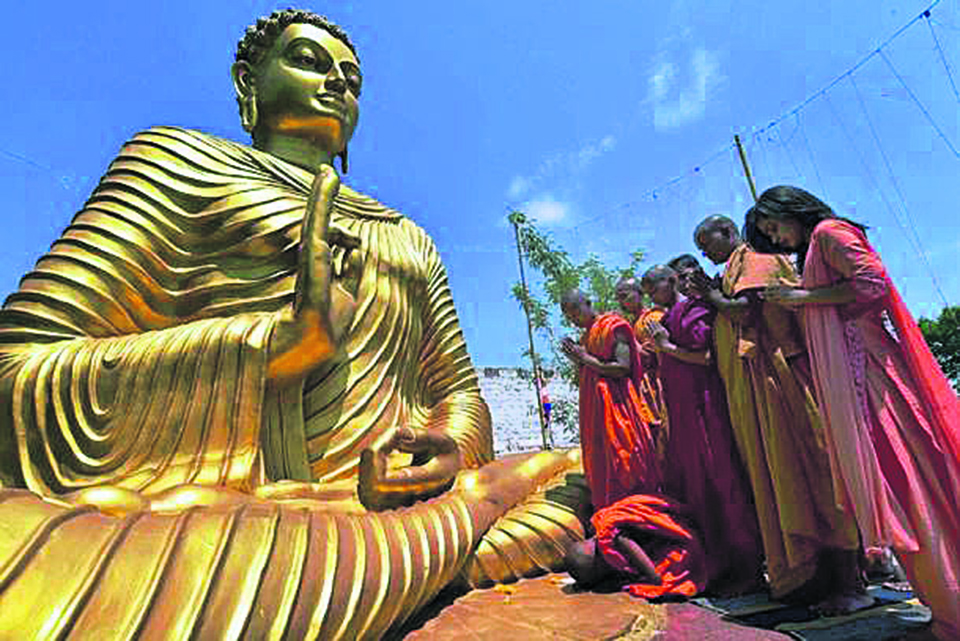 The Dalai Lama was referring to the fact that, Lumbini, the birthplace of  Buddha, was a kingdom when neither Nepal nor India existed.

The 14th Dalai Lama (religious name Tenzing Gyatso) is being trashed left and right by Nepali nationalists on social media these days. After watching the original video that started all this, I felt, all he was trying to say was: “Buddha should not and cannot be restricted into narrow national boundaries of Nepal or even India”.

After the uproar, he came up with a very balanced clarification, which he shared on his Facebook page on November 26, reiterating that he, like everyone else, believes Buddha was born in Lumbini.

Yet a lot of insult is being thrown at the Dalai Lama. There is a picture floating on social media with tags like “The Lie Lama” or “Dalal Lama”, both derogatory terms. Some have openly accused him of being anti-Nepali, or a pro-Indian. Others appear to claim they know more about Gautam Buddha and Buddhism than Dalai Lama—the living light of Buddhism who has spent his entire life promoting Buddhism.

By the virtue of birth

Siddhartha Gautam became the Gautam Buddha, the light of Asia, after entering the land that is present-day India. The land that provided enlightenment to a curious young Yogi should be able to claim something of him too. The Dalai Lama was also referring to the fact that, Lumbini, the birthplace of Buddha, was a kingdom in itself when neither Nepal nor India existed. I don’t know why there is uproar against this fact.

Have you heard Jesus Christ being claimed as a Palestinian just because of his birthplace? If Jesus is not flashing Palestinian or Israeli identity, why is Buddha expected to carry a Nepali identity card all the time? If Lumbini was a separate kingdom then, Gautam Buddha would have been a citizen of a state called Lumbini. Interestingly, Nepal, in this day and age, has failed to provide citizenship by the virtue of birth, except for the Buddha.

Yes, Nepalis are claiming Buddha, based on the fear that “India is planning to take Buddha away”. Perhaps the Dalai Lama was referring to this syndrome as “nonsense”. And I agree with him. To give a Nepali tag to a man born some 2,600 years ago, who we all agree was a prince of an independent state, is pure nonsense.

The recent trashing of the Dalai Lama on social media is a stark reminder that we are witnessing “Buddha nationalism”. How did this start? You have to enter the classrooms of Nepal to map it. “Buddha is a Nepali” is a statement that gets injected into our psyche since kindergarten. We establish a close—almost father-like relation—with Buddha and it becomes part of our identity. So anxiety is normal. Anger follows, even with a slight fear of ‘losing’ Buddha.

The image of Buddha has become a part of our collective Nepali identity in the most irrational way. Very few of us care to understand his Four Nobel Truths or his eight-fold path to emancipation. Buddha is one of the thousands of idols that we bow to. No one asks why. But we are programmed to say “Buddha Bhagwan, the icon of Peace, was born in Nepal.” We were not taught anything beyond this.

Nepalis get offended easily. We get offended when some Indian actor “dislikes” Nepal. We might not know who said it, but that does not matter. Our collective anger just spills out of our homes and onto the streets without looking at facts. Sometimes, I think, any Indian can break the peaceful Buddha within us and pull us out to the streets, shouting. People can touch “our Buddha” in a different way than what we are used to, and break our cool. Buddha nationalism is so pervasive that one statement, even one gesture, is enough to pull together thin-skinned nationalists.

Every day, someone has to continuously tell these Buddha nationalists that Buddha is yours and only yours. One little criticism of Buddha is enough to throw them into unending collective tantrum. Our Buddha huggers who are ready to break legs of those who question “Nepali identity of Buddha” don’t see that Buddha renounced violence. The separation anxiety with Buddha is such that it has turned many Nepalis into emotionally unstable nationalists.

We hardly understand Buddha. Probably, that is why we continue to spout fire when we hear something contradictory about Buddha. UNESCO listed Lumbini as the birthplace of Buddha and effectively ended the dispute related to the birthplace. But a spat between India and Nepal over Kapilvastu has been continuing for decades, if not more.

A decade ago, as a TV journalist, I had extensively reported on Lumbini. I really wanted to evaluate facts too. But, then, there were hardly any facts other than archeologists defending their excavation based on their national identities. In Tilaurakot, Nepal, an archeologist showed me the ruins of excavated walls and said that the fortification and palace-like structure suggest that this was a royal palace. “Everything that we have found so far suggests that this is a palace of Gautam Buddha”, he concluded.

But there was nothing concrete to put the matter to rest. The Indian archeologists, on the other side of the border, were showing the Piprahwa site as the legitimate Kapilvastu, after it produced remains of a stupa and monasteries. It also corresponds to the written account of Chinese travelers like Huen Tsian, they claim. Mind you, the Chinese travelers visited Buddha’s kingdom hundreds of years after his death. But so did the Mauryan emperor Ashoka. Both sides highlight the points that strengthen their Kapilvastu claim and conveniently leave or downplay others that do not. And there probably is no Ashoka Pillar with an inscription, as in Lumbini, waiting to be excavated to put an end to this dispute.

If you buy the argument that Mayadevi was either headed to Kapilvastu or returning to Devdaha from there while Buddha was born, Kapilvastu has to fall somewhere in south or southwest of Devdaha. Since the birthplace of Buddha, Lumbini, is undisputed, that works to our advantage. But unfortunately, both Tilaurakot, Nepal (Kapilvastu that UNESCO is excavating) and Piprahawa, India (Kapilvastu site as per the Indian claim) are side by side and southwest of Lumbini. Carbon dating of Piprahwa excavations showed people’s presence there 1,000 years before Buddha’s birth.

We probably have to dig more to conclude anything. Probably there are more palace-like structures, or ruins of civilizations scattered, waiting to be excavated. All these could further complicate our Kapilvasthu puzzle. That means, unless we find another Ashoka Pillar, effectively marking the kingdom of Prince Siddhartha Gautam, this dispute will continue.

Just imagine if Piprahawa site, or any other site on the Indian side, came up with proof solidifying the Indian claim over Kapilavastu. In that case, armed with new facts, they could snatch a part of Nepali identity, if continue with this Buddha nationalism.
The Dalai Lama is just punctuation in the unending dispute between two Buddha-loving neighbors who are farthest removed from Buddha’s philosophy. If there is someone who is going to save all Nepali Buddha-huggers it’s the Buddha himself. But, for that, one has to look beyond the image of Buddha and into his Nobel Truths and eight-fold path to emancipation. To start with, can we at least follow one path—right speech—and stop bashing the Dalai Lama?

Where’s peace? Is this the land of Buddha’s morals? This is land of hungry predators. Whose prey are the Cherishing... Read More...