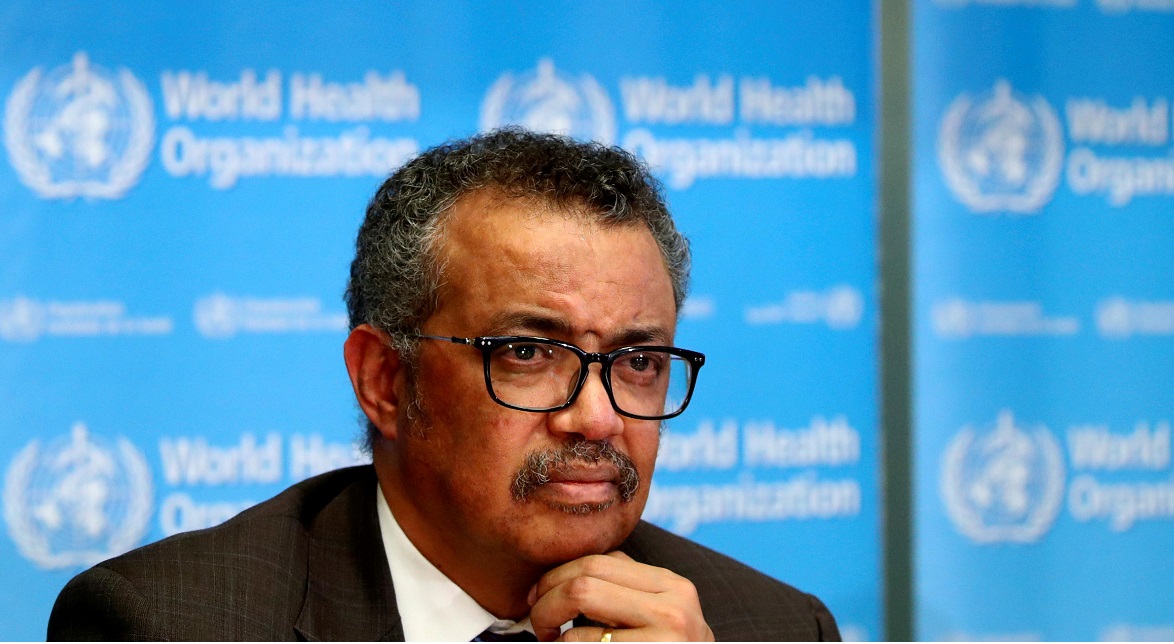 FILE PHOTO: Director General of the World Health Organization (WHO) Tedros Adhanom Ghebreyesus attends a news conference on the situation of the coronavirus (COVID-2019), in Geneva, Switzerland, February 28, 2020. REUTERS/Denis Balibouse

GENEVA, June 9: New coronavirus cases had their biggest daily increase ever as the pandemic worsens globally and has yet to peak in central America, the World Health Organization (WHO) said on Monday, urging countries to press on with efforts to contains the virus.

“More than six months into the pandemic, this is not the time for any country to take its foot off the pedal,” WHO Director General Tedros Adhanom Ghebreyesus told an online briefing.

More than 136,000 new cases were reported worldwide on Sunday, the most in a single day so far, he said. Nearly 75% of them were reported from 10 countries, mostly in the Americas and South Asia.

In response to a question on China, WHO’s top emergencies expert, Dr. Mike Ryan, said retrospective studies of how the outbreak has been addressed could wait, adding: “We need to focus now on what we are doing today to prevent second peaks.”

Ryan also said infections in central American countries including Guatemala were still on the rise, and that they were “complex” epidemics.

“I think this is a time of great concern,” he said, calling for strong government leadership and international support for the region.

Brazil is now one of the hotspots of the pandemic, with the second highest number of confirmed cases, behind only the United States, and a death toll that last week surpassed Italy’s.

After removing cumulative numbers for coronavirus deaths in Brazil from a national website, the Health Ministry sowed further confusion and controversy by releasing two contradictory sets of figures for the latest tally of infection cases and fatalities.

Ryan said Brazil’s data had been “extremely detailed” so far but stressed it was important for Brazilians to understand where the virus is and how to manage risk, and that the WHO hoped communication would be “consistent and transparent”.

Maria van Kerkhove, a WHO epidemiologist, said that a “comprehensive approach” was essential in South America.

More than 7 million people have been reported infected with the coronavirus globally and over 400,000 have died.

“This is far from over,” van Kerkhove said.

At least half of Singapore’s newly discovered coronavirus cases show no symptoms, the co-head of the government’s virus taskforce told Reuters on Monday, reinforcing the city-state’s decision to ease lockdown restrictions very gradually.

Van Kerkhove said that many countries doing contact tracing had identified asymptomatic cases but were not finding that they caused further spread of the virus, adding: “It is very rare”.

Ryan, asked about technical cooperation with the United States after President Donald Trump’s announcement 10 days ago that it was terminating its relationship with the WHO, said the WHO relies heavily on experts from the U.S. Centers for Disease Control and Prevention and the National Institutes of Health.

“We will continue to do that until we are otherwise instructed or informed,” he added.

WHO acknowledges 'evidence emerging' of airborne spread of COVID-19

10 things you can do to prevent COVID-19

KATHMANDU, March 7: The novel coronavirus is continuing its spread in many countries around the world. Amid coronavirus outbreak, the... Read More...