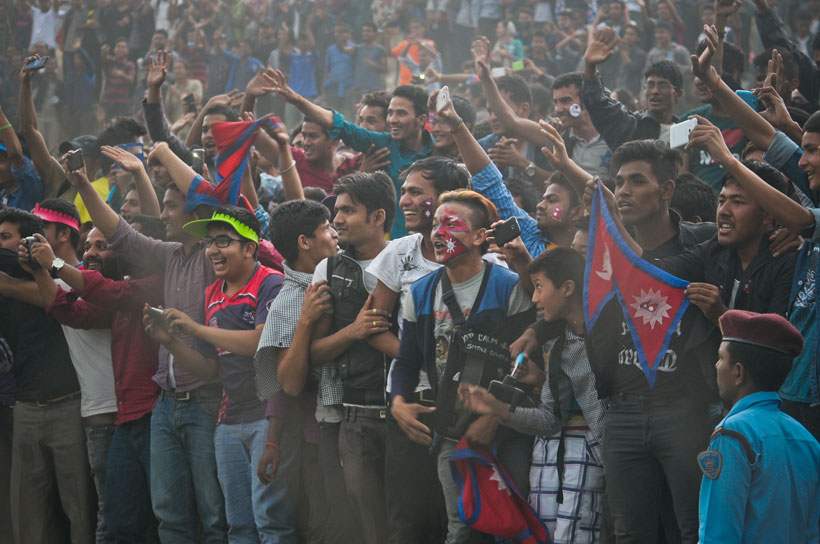 When Mohammad Aasif Shiekh hit a six to score the first hundred of the Everest Premier League in the finals earlier this year, it was a sight to behold. Never before in the Nepali domestic cricket scene had a young man displayed so much composure, such resilience and excellent craftsmanship.

Sandeep Lamichhane, another talented teenager, needed merely ten minutes of cricket played under dim lights in a moon-lit sky in Chitwan last year to leave an impression upon then Nepali national coach, Pubudu Dassanayake; he was subsequently chosen to represent the national side. A year later, one of Australia’s most successful cricket mind, Michael Clarke, invited Lamichhane to Australia to train and play for a regional team there, a preview of his potential for glorious days ahead.

Binod Bhandari hit the last ball of the innings for a six against Kuwait to tie the match over a 90 yard boundary in Abu Dhabi to begin his cricketing journey.

Dipendra Singh Airee celebrates with somersaults when he gets a wicket and just today played one of the most important and memorable innings (90 runs of 99 deliveries) of his life against the Sri Lanka U-19 boys, who are being led by the former coach of Nepal. Upon losing his wicket, and Nepal’s last, in the final over with Nepal needing one more run to come out victorious, the jubilant somersaulting acrobat broke down in tears, heartbroken like thousands of fans of Nepal cricket.

Such genuine tears, relentless hard work, unwavering discipline, palpable energy and passion, personal sacrifices, resolute commitments and unending struggles of daily life have remained synonymous to the history and present scenario of Nepal Cricket, which is being held intact, barely, only and only by the love of the game and the burning desire to represent the country on an international platform – the only factor that has brought Nepal Cricket to where it is today.

Nepal takes on Namibia in an ICC World Cricket League Championship game on a bright April afternoon in Kirtipur and every inch of open space in the only international ground in Nepal is filled with bodies clad in red and blue waving the triangular Nepali flag and screaming in support of their team. Ground filled with 15 to 18 thousand ardent fans echo Sompal, Sompal; Nepal, Nepal while millions across the country and abroad follow every ball on television screens. Sompal delivers, Nepal wins, the crowd goes ecstatic and social media accounts are filled with praise for the national heroes, all of which last just as long as any news on social media.

The following day, Sompal, and half of his teammates, take public vehicles to go home and nobody cares.

Nepal cricket has seen a lot and significantly transformed over the last 20 years. From the time cricket starting becoming popular among the masses to the present scenario, the standard of the game, the way it's played, the interest among the people has grown ten folds. That’s the only growth visible, but who cares?

Social media has taken over the world. Everyone behaves like a technical analyst, a cricket guru and a broken cricketing encyclopedia assessing what went right and what could have been done differently to change the outcome of any given game. The streets of London, the alleys of Amsterdam, white sand beaches of Bermuda, the malls of Dubai, the cricket factories in India, etc. etc. have all seen Nepal cricket grow big in terms on-field results.

The filtered pictures on Instagram; the momentary Snapchat(s); the 140-character tweets; the Lords Balcony; the U-19 teams that beat heavyweights like Pakistan,South Africa,New Zealand; the 2014 T-20 World Cup; and the familiar cheers and deafening applaud at the Kirtipur ground seem to be ingrained in memories and memories only. Because who cares?

We watch, we play, we follow, we comment – joyous celebrations and disappointed tears at the same time. This is what sport is, this is what Nepal cricket has brought to the nation, but still who cares? Having already spent 14 years representing the National colors and being wary on most part of how things have unraveled, the future is what needs to be addressed and addressed very quickly.

The U-16 team won the ACC championship in 2014 and everyone since then have gone missing. Some senior players sacrificed 18-20 years playing the game, broke national and international records, got recognition during their times and walked out with very little to their names, even less to take home with them.

The love for the game among the Nepali cricketers has to be recognized. But who and where do you play cricket? Why do we play cricket? Are we even playing it the way it should be? Successful results could show a a very rosy picture but with changing times, we need to do adapt too.

Someone somewhere out there, please do something. Anything. I repeat, do something to help these home-grown cricketers to shine and showcase their inner cricketing demons. Cricket tournaments are like festivals here in our country – people enjoy, feast, celebrate, notice for the time being and just as easily, people forget. 10 days of cricketing flight, a six-month transit before another chance to fly, and you could play that in repeat. Even after so many years, nothing has changed. Yet, who cares?

We fought the system, the governance, challenged the system by putting self-made amateur cricket careers on the line and still nothing has changed. Everyone appears to know the cure here yet no one even vaguely attempts to address the disease. The most vivid and truthful statement anyone has ever said about Nepal cricket, and our country as a whole, for me at least, has come through the wisdom of our former coach, Mr. Roy Luke Dias, who upon concluding a ten-year tenure as the Nepali coach, said, “Nepal is a casual country,” and I firmly believe that sums us up in five words. Case in hand: the earthquake shook our roots last year and the casualness that follows till date from every sector exemplifies our existence.

The VVIP’s of the nation, the big heads and the mass leaders, small groups and dignitaries have all come and gone. The flowers have been handed, the garlands have been worn, the certificates have been distributed, and the recognition has been made. And just as swiftly they came, they left, none of whom have turned back to see what has happened.

We now need domestic structures, playable grounds, solid foundations and pavilions. We need white-uniform-red-ball cricket; we need coaches, umpires, scorers and groundsmen to be looked after for their efforts. The passion with which the players have dedicated all their lives to the game has to be understood and taken into account by all concerned cricket pundits and administrators. We need greener softer outfields just to slide and dive full lengths, proper leather balls to protect the already broken bats and dreams and cricket nets that have no holes in them, but who cares?

We lost by one run today. No matter how close we were, we still lost. Let this not be the story of Nepal cricket; let us not lose the battle ahead. Talent has sustained the game, gone through the grind and proven itself now. But that alone cannot withstand the intensity of modern day game because talent simply cannot outgrow itself. The young cricketers of the Himalayan nation need to be nourished with care and freedom, with better provisions and facilities to hone their skills. The future is bright, and all can see it. History says we have overcome all obstacles and always held our independence, our way of living, despite all odds pitted against us. Its about time we maximize our potential and conquer the cricketing world. The process might be long and slow and very difficult but nothing worth having is ever given to you. Together we can!

But who is that together made up of? The answer is simple here in my country: nobody cares. Not then, not now, not ever. Still, who cares?

The blog originally appeared in http://www.paraskhadka.com