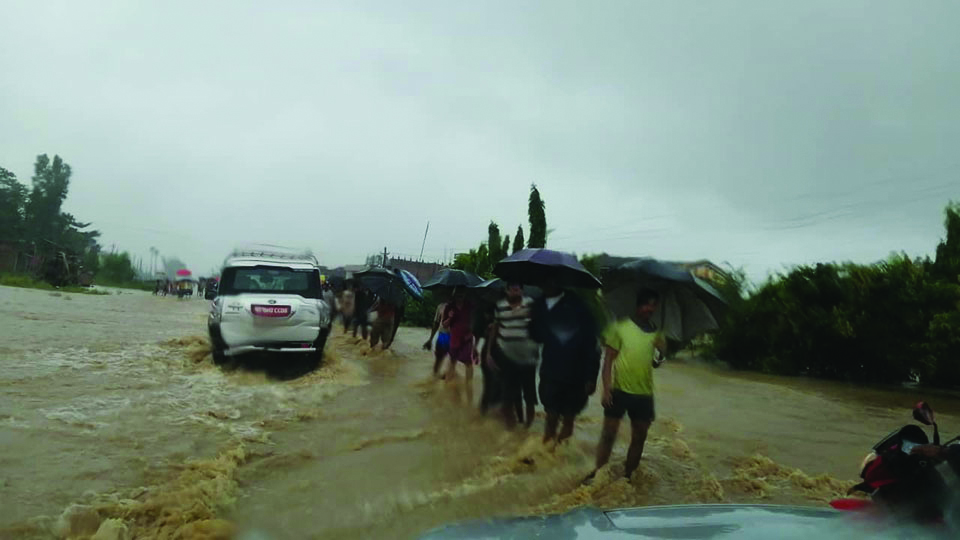 Enforcing disaster preparedness is still a far cry in Nepal. Our efforts have been mostly focused on response. And response mechanism is activated only in time of emergency

Monsoon, in many ways, is lifeblood for Nepali economy, which largely depends on agriculture, with nearly 66 percent of population directly engaged in farming and more than 26.5 percent of contribution of agriculture in gross domestic product. Sadly, though monsoon brings respite for farmers, it also brings a fair share of calamities with it. Given the country’s fragile topography, complicated geographical structure and climatic variations, Nepal is highly vulnerable to several rain-induced disasters during monsoon—flash-flooding, inundation, thunderstorms, cloudbursts, landslides, among others.

Landslides and floods have wreaked havoc in various parts of Nepal this year. Lands and human settlements were inundated, ravaged and swept away. Houses and walls collapsed. Roads were washed away and utility poles were disrupted.  As per the updates of Ministry of Home Affairs as of July 18, as many as 90 people were killed, 41 sustained injuries while 29 are still missing, and 12,938 families were rendered homeless. More than 25 districts of Tarai and mid-hills have suffered the tragedy. It is estimated that 452 thousand people from 90 thousand families have been affected. Preliminary estimation shows properties worth billions have been damaged.

Landslides and floods are common in Nepal during monsoon. They take their horrendous toll on large population while wreaking havoc on agriculture, environment, industries and economy, and other developmental activities. Every year, Nepal records heavy loss of lives, property and infrastructures to monsoon related disasters.

Tens of thousands of people are evicted from their permanent settlements as their settlements are deluged with flooding, swept away and left in ruins. Besides, vehicular movements and other critical services are brought to a grinding halt for hours or even for days as floods and landslides obstruct various road stretches, leaving hundreds of thousands of commuters stranded.  This happened along East -West Highway recently. Heavy rains often wipe away roads, bridges, utility poles, and other critical infrastructures, trapping villagers and leaving vast areas inaccessible to humanitarian support. Also in the wake of these natural calamities, various health hazards loom large. Mostly the poor population, children, women and elderly people have to bear the brunt of life-threatening impacts of monsoon mayhem.

Nepal is home to more than 6,000 rivers and rivulets. Most of them swell beyond their capacity during monsoon when incessant rainfall lashes the nation for hours. The settlements near the major river basins such as Mahakali, Karnali, Babai, West Rapti, Gandaki, Bagmati, Kamala, Koshi, Kankai, among other southern rivers, and structures on the banks of rivers are badly hit as they are always at higher risk of floods. The hills and high hills also experience landslides, avalanche and glacial lake outburst owing to their topographical vulnerability, fragile ecosystem, and young geology of the Himalayas.

Dams, embankments and other structures built by India along the border, Nepal’s lack of diplomatic acumen to resolve this issue with India through talks, haphazard extraction of Chure, haphazard road construction in the hills without proper feasibility study and sustainable engineering, unplanned urbanization and deforestation, impacts of climate change, weak channeling of funds allocated for disaster risk reduction efforts due to corruption, among others, have exacerbated the disaster risks.

Nepal Disaster Report (2017) has placed Nepal among the 20 most disaster prone countries in the world. As per the Global Assessment Report on Disaster Risk Reduction (2015), Nepal suffers annual loss exceeding $220 million. According to National Emergency Operation Centre (NEOC) of Ministry of Home, as many as 1,612 persons died, 706 disappeared, and 1,047 were severely injured in floods, landslides, incessant rainfall, and avalanches that struck parts of the nations between 2011 and 2018. NEOC’s recent updates show as of April 16, 2019, there were as many as 248 heavy rainfalls, 82 floods, 336 landslides, 287 thunderbolts, and four avalanches within a year, in which 198 persons were killed, 202 injured, five disappeared, and 2,528 families were badly affected.  Despite this, the government has not been able to do much to prevent loss and save lives from the disasters.

Enforcing disaster preparedness is still a far cry in Nepal. Our efforts have been focused on response. And response mechanism is activated only in time of emergency soon after water level crosses a danger level and catastrophes surface. Often, such efforts made by the authorities remain effective only for a couple of weeks.

Though Disaster Risk Reduction and Management (DRRM) Act (2017) has clearly proposed multi-tier institutional structures disaster risk reduction and management at the centre, the provinces, the districts and local levels, and has guaranteed a strong legal footing for those working in the field of disaster risk management cycle—preparedness, response, rescue operation, recovery, relief or mitigation efforts—the government has not been able to respond to the need of affected population.  What happened in Bara, Parsa, Kailali and Kanchanpur offers the evidence. Our constitution has a provision of Disaster Risk and Management (DRM) under Article 51 and Schedules 5 to 9, and has clearly mentioned DRM as a concurrent responsibility of the three tires of government.  Thus along with Ministry of Home Affairs, Ministry of Federal Affairs and Local Development, Ministry of Urban Development, Ministry of Physical Infrastructure and Transport, Nepali Army, Nepal Police, Armed Police Force and I/ NGOs, political actors and officials in all three levels need to work together for effective disaster preparedness measures, and disaster risk reduction and responses. Our disaster risk reduction effort is mostly inactive and woefully underfunded as the concerned officialdom are lagging far behind even in devising functional plan and policies for long term mitigation strategies. The costs of disasters are huge. We are failing to take action.

The recent floods and landslides have brought to the fore the need for stricter and effective mechanism of disaster preparedness cycle. Scaling up early warning system coupled with hydrological monitoring on major river basins, and forecasting or assessing when a disaster is likely to occur is a key to disaster preparedness. In this regard, the efforts made by the National Emergency Operation Centre under the Ministry of Home affairs and the flood forecasting division of the Department of Hydrology and Meteorology are highly appreciated. But the main concern is if the information reaches the targeted communities on time, whether they get enough time to escape the calamities or whether we can make the communities withstand future calamities.

Responding to the need of affected people and communities in effective manner is one of the key aspects of disaster preparedness cycle. When it comes to measuring the strength of both the governance and bureaucracy, nothing but natural disasters test their will and real efficiency. Nonfunctional disaster risk reduction and response mechanism, ineffective rehabilitation process and relief operation, and mere promises for change do not help. We need to prove with action that we are prepared for mitigating the risks of disasters.

The author is currently a faculty member at Narayani Public College, Bharatpur, Chitwan

One of the reasons Indo-Pacific advocates are focused on Nepal is due to our strategic importance, so distinctive for global... Read More...