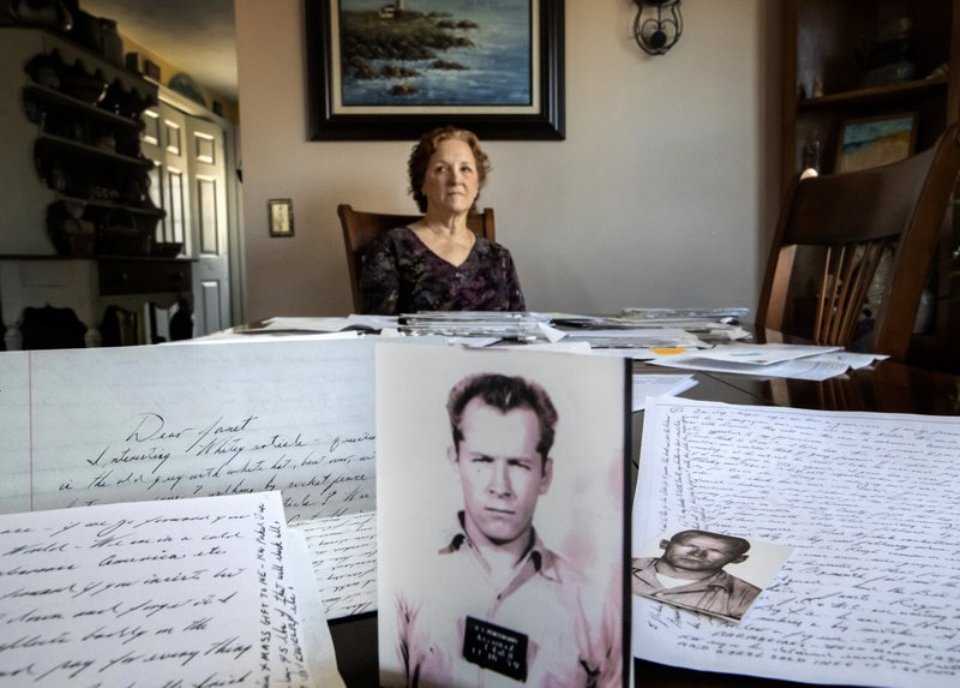 Janet Uhlar sits for a photo at her dining room table with an arrangement of letters and pictures she received through her correspondence with imprisoned Boston organized crime boss James "Whitey" Bulger, Friday, Jan. 31, 2020, in Eastham, Mass. Uhlar was one of 12 jurors who found Bulger guilty in a massive racketeering case, including involvement in 11 murders. But now she says she regrets voting to convict Bulger on the murder charges, because she learned he was an unwitting participant in a secret CIA experiment in which he was dosed with LSD on a regular basis for 15 months. (AP Photo/David Goldman)

EASTHAM, MASS, Feb 18:  The notorious crime boss James “Whitey” Bulger terrorized Boston from the 1970s into the 1990s with a campaign of murder, extortion, and drug trafficking, then spent 16 years on the lam after he was tipped to his pending arrest.

In 2013, Janet Uhlar was one of 12 jurors who found Bulger guilty in a massive racketeering case, including involvement in 11 murders, even after hearing evidence that the mobster was helped by corrupt agents in the Boston office of the FBI.

But now Uhlar says she regrets voting to convict Bulger on any of the murder charges.

Her regret stems from a cache of more than 70 letters Bulger wrote to her from prison, some of which describe his unwitting participation in a secret CIA experiment with LSD. In a desperate search for a mind control drug in the late 1950s, the agency dosed Bulger with the powerful hallucinogen more than 50 times when he was serving his first stretch in prison __ something his lawyers never brought up in his federal trial.

“Had I known, I would have absolutely held off on the murder charges,” Uhlar told The Associated Press in a recent interview. “He didn’t murder prior to the LSD. His brain may have been altered, so how could you say he was really guilty?” At the same time, Uhlar says she would have voted to convict Bulger on the long list of other criminal counts, meaning he still would likely have died in prison.

Uhlar has spoken publicly about her regret before but says her belief that the gangster was wrongly convicted on the murder charges was reinforced after reading a new book by Brown University professor Stephen Kinzer: “Poisoner in Chief: Sidney Gottlieb and the CIA Search for Mind Control.” The book digs into the dark tale of the CIA’s former chief chemist and his attempts to develop mind control techniques by giving LSD and other drugs to unsuspecting individuals, including colleagues, and observing the effects.

“It was encouraging to know I wasn’t losing my mind, thinking this was important,” Uhlar said. “It told me, this is huge. I mean, how many lives were affected by this? We have no idea.”

Gottlieb’s secret program, known as MK-ULTRA, enlisted doctors and other subcontractors to administer LSD in large doses to prisoners, addicts and others unlikely to complain. In Bulger’s case, the mobster and fellow inmates were offered reduced time for their participation and told they would be taking part in medical research into a cure for schizophrenia.

“Appealed to our sense of doing something worthwhile for society,” Bulger wrote in a letter to Uhlar reviewed by the AP.

But nothing could have been further from the truth.

“The CIA mind control program known as MK-ULTRA involved the most extreme experiments on human beings ever conducted by any agency of the U.S. government,” Kinzer said. “During its peak in the 1950s, that program and it’s director, Sidney Gottlieb, left behind a trail of broken bodies and shattered minds across three continents.”

After Bulger was found guilty by Uhlar and the other jurors, a federal judge sentenced him to two life terms plus five years. But his life behind bars ended a little more than a year ago, at age 89, when he was beaten to death by fellow inmates shortly after arriving in his wheelchair at the Hazelton federal prison in Bruceton Mills, West Virginia. No criminal charges have been filed.

Although much had been written about the CIA’s mind control experiments before Bulger’s trial, Uhlar said she knew nothing about them until she began corresponding with the renowned gangster following his conviction.

Uhlar started writing Bulger, she said, because she was troubled by the fact that much of the evidence against him came through testimony by former criminal associates who were also killers and had received reduced sentences in exchange for testifying against their former partner in crime.

“When I left the trial, I had more questions,” she said.

After Bulger started returning her letters, Uhlar noticed he often dated them with the time he had started writing in his tight cursive style. “He always seemed to be writing at one, two, or three in the morning and when I asked him why, he said it was because of the hallucinations,” Uhlar said.

When Uhlar asked him to explain, Bulger revealed what he had already told many others: that since taking part in the LSD experiments at a federal prison in Atlanta, he’d been plagued by nightmares and gruesome hallucinations and was unable to sleep for more than a few hours at a time.

“Sleep was full of violent nightmares and wake up every hour or so — still that way — since ’57,” he wrote.

“On the Rock at times felt sure going insane,” he wrote in another letter, referring to the infamous former prison on Alcatraz Island, in San Francisco Bay, where he was transferred from Atlanta. “Auditory & visual hallucinations and violent nightmares — still have them — always slept with lights on help when I wake up about every hour from nightmares.”

The mobster also recalled the supervising physician, the late Carl Pfeiffer of Emory University, and the technicians who would monitor his response to the LSD, asking him questions such as, “Would you ever kill anyone? Etc., etc.”

That questions struck a nerve with Uhlar. After hearing from Bulger about MK-ULTRA, “as if I should have known about it,” she visited him at a Florida federal prison on three occasions to discuss the experiments and started reading everything she could find about them.

At one point, she reviewed the 1977 hearings by the U.S. Senate Committee on Intelligence, which was looking into MK-ULTRA following the first public disclosures of the top-secret program.

The hearings included testimony from CIA director Stansfield Turner, who acknowledged evidence showing that the agency had been searching for a drug that could prepare someone for “debilitating an individual or even killing another person.”

“That’s just horrifying, in my opinion,” Uhlar said. “It opens up the question of whether he was responsible for the murders he committed.”

According to at least two of the several books written about Bulger and his life of crime, associates including corrupt former FBI agent John Morris said they assumed Bulger would use the LSD experiments to mount an insanity defense, if he were ever caught and tried.

But in 2013 Bulger’s Boston attorneys, J.W. Carney Jr. and Hank Brennan, unveiled a novel defense in which they admitted Bulger was a criminal who made “millions and millions of dollars” from his gangland enterprise, but was enabled by corrupt law enforcement officers, especially those in Boston office of the FBI.

Neither Carney nor Brennan would comment on their decision — attorney client privilege outlasts a client’s death. But Anthony Cardinale, a Boston attorney who has represented numerous organized crime defendants, said he would have opted for an insanity defense, in part because of the abundant evidence against Bulger.

“I would have had him come into court like Harvey Weinstein, all disheveled, and in a wheelchair,” he said.

Still, Cardinale acknowledged there would have been challenges to presenting an insanity defense, including the fact that Bulger spent 16 years out-witting several law enforcement agencies, before he was captured in 2011 in Santa Monica, Calif., where he’d been living quietly with his longtime girlfriend while on the FBI’s Ten Most Wanted List.

“The problem is, he lived for a very long time on the lam in a very secretive and a very smart way,” Cardinale said. “But that doesn’t diminish the notion that, based on the LSD experiments, and the doses he was experiencing, he could have convinced himself of things that were not true, including that he had immunity from prosecution and could do whatever he wanted.”

John Bradley, a former Massachusetts federal prosecutor and assistant district attorney, agreed that defense lawyers would have faced high hurdles waging an insanity defense, noting that most end in convictions.“The flip side is that jurors are sometimes swayed by morality more than legality,” he said. “The whole shtick that the government played a role in creating this monster, uses him as an informant and then goes after him — that’s an argument that could affect one or two jurors.”

And it only takes one to vote not guilty on all the criminal charges to produce a hung jury, Bradly noted, forcing prosecutors to decide whether to retry a case.

Given Bulger’s decades as a crime boss who corrupted the Boston office of the FBI, paying cash and doing favors in exchange for information that helped him thwart multiple investigations, a retrial would have been a near certainty. Nevertheless, Cardinal said, a hung jury in the Bulger case “would have been a monster victory” for the defense.

Even if Bulger were convicted on the other criminal charges and received a sentence that would have kept him behind bars for life, a refusal to find him guilty on the murder charges would have meant anguish for family members of his victims.

“As in any case involving a tragic murder, a conviction of the perpetrator helps family member obtain closure and move on with their lives,” said Paul V. Kelly, a former federal prosecutor who has represented the family of one of Bulger’s murder victims. “An acquittal of Whitey Bulger on the murder charges would have just caused additional pain and anguish.”

Uhlar has written about the Bulger trial in “The Truth be Damned,” a fictionalized account she published in 2018 and advertises on her website. She also gives occasional talks on the trial at community centers and libraries.

During her correspondence and visits with Bulger, Uhlar said, she grew fond of the gangster, though he often warned her that he was a criminal and “master manipulator.” When asked if Bulger might have manipulated her, she said, “I’ve asked myself that many times. I’ll finish reading a letter and say, ‘Could he have?’ “

Bulger often wrote to Uhlar as if she were a friend, even joking with her. But in one letter he also enclosed a more menacing message inscribed to her on the back of a photo taken of him on “the Rock,” at a time when he was fending off LSD-induced nightmares while contemplating his return to Boston’s violent criminal underworld.

“At end of Alcatraz, getting more serious and capable of about anything,” he wrote. “Hard time makes hard people.”

SINGAPORE, Aug 1: Drug trafficking into Singapore, which has some of the world’s toughest drugs laws, has risen recently, the... Read More...

Violence against women sees spike in Suklaphanta Municipality
38 minutes ago