JAJARKOT, Oct 26: Tihar, the second biggest festival of Nepali Hindus, is around the corner. People around the country are busy in making necessary arrangements for Tihar celebrations. People are getting engaged in various activities ranging from cleaning houses and streets for Laxmi, the goddess of wealth to installing electric lamps to hustling and bustling in local markets for Tihar shopping. 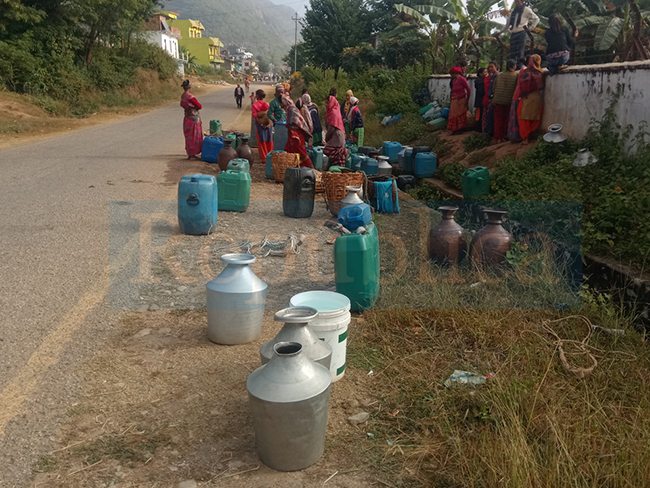 However, it is not a similar case in Bheri municipality-13, Kudu of Jajarkot. They seem as if they have nothing to do with Tihar, the festival of lights. They don’t have time for thinking of Tihar celebrations, let alone making preparations. 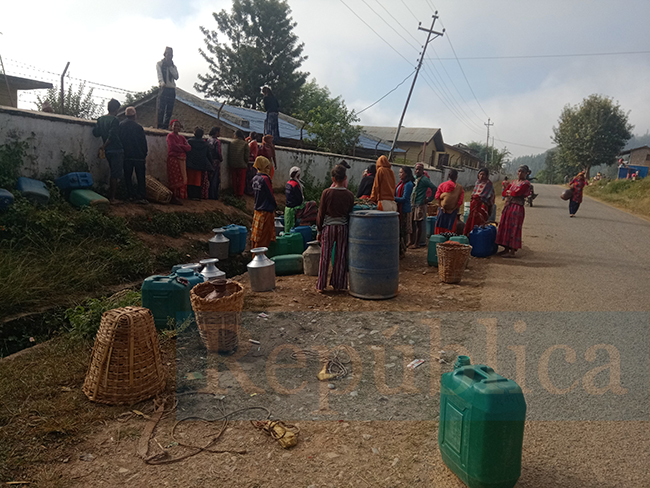 Tihar doesn’t have any impact on Kudu dwellers. It’s not because of any disaster. And also not of any cultural barrier, but because of the shortage of drinking water. 465 households of Kudu have to queue up at local rivers and water-springs to manage much-needed drinking water.

It’s been a year the Kudu people are hitting hard by water wos.

Although there were some efforts to address the water woes through the use of deep boring technology with the investment made by Bheri municipality last year, the problem has remained unsolved.

Ram Bahadur Rokaya, a local said, “Deep boring supplies water for only one and a half hour which is not sufficient to address the demand of locality.”

According to Pramila Batala, another Kudu resident, they are suffring a lot as they have to stand up in the queue for several hours in the morning and evening only for water.  “Women and children are particularly affected by this,” Batala said adding, “While people from other places are now in the festive mood, we have to worry about drinking water round the clock.” She wonders who is going to respond to their grievance.

People now express their dissatisfaction over the failure project launched by the municipality.

Mayor of Bheri municipality Chandra Prakash Gharti, on the other hand, admitted that they have failed to live up to people’s expectations. “We tried to address the problem, but the project couldn’t succeed in the recent times,” mayor Gharti said.

He, however, committed to solve the problem at earliest by seeking alternative solutions if deep boring doesn’t turn out to be an effective measure.

Water supply in Kathmandu Valley less than one-third of demand

KATHMANDU, Dec 19: The existing water supply in the Kathmandu Valley is less than one-third of the demand. The Kathmandu... Read More...

JAJARKOT, Oct 23: Leaders and cadres of the CPN (Maoist Centre) have expressed their disappointment over the decision of left electoral... Read More...

Migrant returnee arrested from TIA
4 hours ago
Govt warns of action against those posting photos, videos in social media platforms without consent
12 hours ago