Where is Bomjon? Police say, “We have no idea” 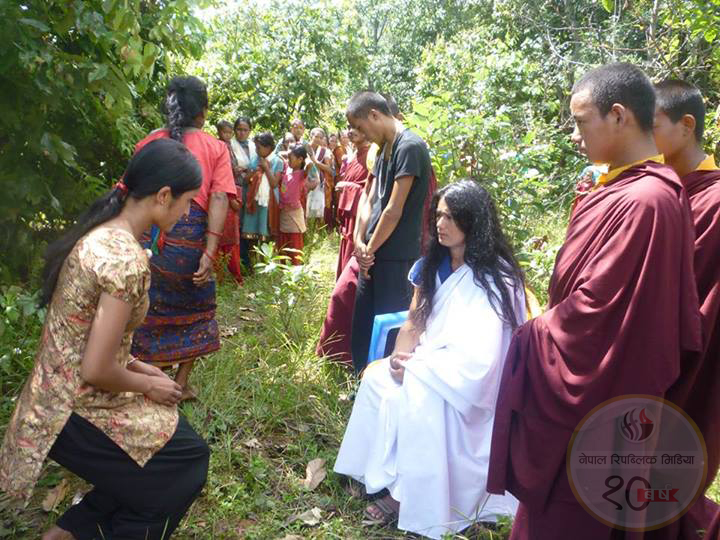 SINDHULI, Feb 22: While lawmakers have been putting pressure on the police to arrest Ram Bahadur Bomjon for his alleged involvement in the disappearance of five of his followers, police in Sindhuli where Bomjon is supposed to be currently living, say they are clueless about his whereabouts.

Bomjon has not attended public function since the family members of the nuns and monks who have gone missing from his ashram filed complaints at various district police offices in last week of December 2017, requesting the authorities to find out the whereabouts of their loved ones. Bomjon and his supporters have been accused of forcing at least five monks and nuns living in his ashram to disappear. Of the total missing monks and nuns two followers - Sancha Lal Waiba and Rita Bot - were allegedly murdered and subsequently disappeared from Bomjon's previous ashrams in Sindhupalchwok and Sarlahi.

Bomjon's supporters had claimed that he would attend a public worship organized on January 20. But he didn't appear at the function nor did he address his followers citing 'security threats'.

Locals suspect Bomjon may not be in Sindhuli in the first place. Like the locals, police are also clueless about Bomjon although his followers are claiming that he is somewhere inside the ashram built inside a vast dense forest.

“I can't say anything about where Bomjon is. His followers are saying he is inside the ashram but we don't have concrete bases to trust their statements,” said SP Singh.

SP Singh, however, said the investigation into complaints filed against Bomjon is underway. District Police Office, Sindhupalchwok and Central Investigation Bureau have been jointly investigating the complaints filed against Bomjon, according to police.Chhatra Ghising, central member of Bomjon affiliated Bodhi Shrawan Dharma Sangh, however, is in Sindhuli. “Whatever rumors are being spread against him, he is inside the Paire-based ashram,” said Ghising, adding, “I am not able to arrange his visit to all visitors willing to meet him since arranging his visit is beyond my control.”He said a joint team of police from Sindhuli and CIB are investigating the matter.

Even as the media is requesting the Sangh to fix a meeting with Bomjon, his followers have not heeded their request. “The Guru is here in Sindhuli. We can't arrange any meeting until Guru himself wants to meet the people,” said Sundar Ghising, chairperson of Bodhi Shrawan Dharma Sangh, Sindhuli chapter.

Bomjon had first come to the Sindhuli-based ashram on June 25, 2011. After spending some three months Bomjon had returned to his Sarlahi-based ashram a year ago. A large number of his supporters are providing shelter to Bomjon.

A month ago, a team comprising Chief District Officer Gyan Prasad Dhakal and District Police Chief Rameshwar Prasad Yadav had reached his ashram. They didn't see him at the ashram.

“He should be in Sindhuli as we have not received any information that he left the ashram,” said CDO Dhakal.