Where ideas get wings 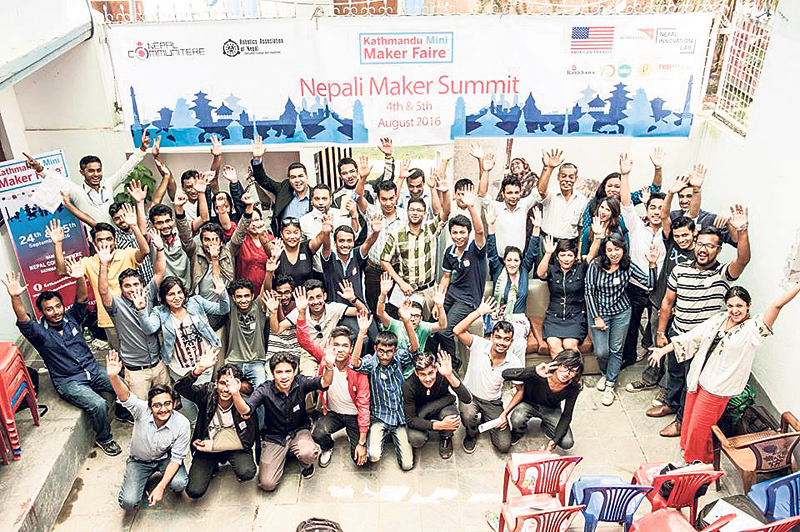 KATHMANDU, Aug 5: Santosh Adhikari and Dilip Thakur are two undergraduate engineering students from Kathford College in Kathmandu. One day they stumbled upon a Ted talk video about alternative farming that immediately sparked the duo’s creative circuitry.

In the weeks that followed, they were seduced by the concept of ‘hydroponics’ – a cultivation method where plants are grown using mineral solutions in water instead of soil. Santosh brought his love for electronics and Dilip summoned his programming skills to sketch a basic design for their digital hydroponics mechanism. Their idea melted engineering and agriculture. For the young engineers, the former was a familiar territory but the latter was complete wilderness.

So they fixed an appointment at National Agriculture Research Centre (NARC), hoping to attract agriculture experts who could provide them agricultural knowledge and get them government funding. They explained their idea to the first NARC guy they met.

“The only expertise he had for us was a sputter of laughter,” Dilip recalls.

While the startup boom has swept the whole world, it’s gradually picking pace in Nepal.

But for youngsters, their entrepreneurial journey starts on dirt roads that rarely offer stopovers where they are welcomed to pitch new ideas to interested investors.

So for innovators like Dilip and Santosh the ‘Kathmandu Mini Maker Faire’ (KMMF) will provide the opportunity to turn their ideas into marketable business. The event jointly hosted by Nepal Communitere, a non-profit organization, and the Robotics Association of Nepal (RAN) will be a carnival-like exhibition that will host 60 stalls where both Nepali and foreign makers will pitch their products to possible investors.

Already 25 Nepali projects have registered for the final maker faire.  The makers were called at a two day ‘National Maker Summit’ this Thursday, where they took sessions on presentation skills, product design and team management.

“Majority of innovators are undergraduate students who have developed their ideas on their own and lack a professional finesse,” said Bikash Gurung, secretary of RAN. “The two-day session boosted the young innovators to polish their products and make it more structured and user friendly.”

Mentors from RAN will now closely work with the makers and track their progress for five weeks before they will pitch their products in the final event that’s scheduled for September 24 and 25.

‘Make’, an American magazine, created Maker Faire event in 2006 for the first time. Since then, many Maker Faire events are held globally to celebrate the DIY (Do It Yourself) movement in the fields of science, technology and arts. KMMF event will be an independent and local version of the event but Nepal Communitere and RAN are hoping to make this a yearly fixture. US Embassy and World Vision are sponsoring this year’s KMMF.

“More than 300 projects are generated in engineering colleges every year. Students submit those projects to their respective professors and that’s the end. But we want the KMMF as a place where innovators can leap off from that stage and develop their projects that give back to society,” said Gurung.

Santosh is positive that they’ll raise money to establish their startup. “We need at least Rs 500,000 for our startup to take off. I’m positive our digital hydroponics will draw some interest in the final faire,” he said.

JAJARKOT, June 12: Though it may sound strange, it is the reality for the 30 households at Pyargara of Tribeni... Read More...

Ideas to get your employees moving

Healthy workers are great for business they take fewer sick days, cost less to insure and tend to be happier... Read More...