When will Niharika Rajput get justice? 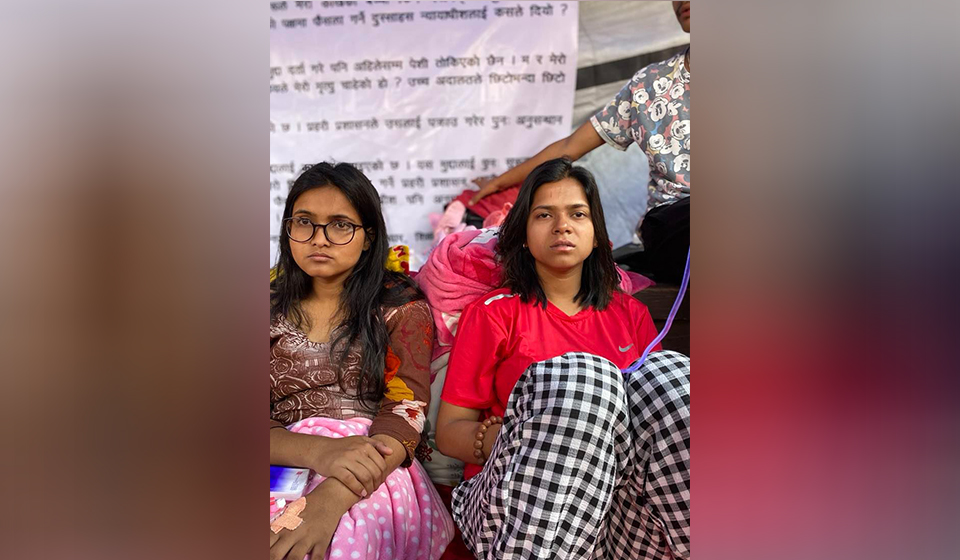 Niharika Rajput (R) and Jasmine Ojha at Basantapur on the fourth day of their hunger strike.

KATHMANDU, June 17: The 19-year-old ‘rape victim’ and single mother Niharika Rajput, who was on a fast-unto-death at Kathmandu’s Basantapur, demanding justice for herself and her 21-month-old child, broke her hunger strike on the 6th day on Thursday, after reaching a five-point agreement with the government.

The five-point deal signed by a senior home ministry official is an indication that the government has finally taken notice of Niharika’s plight. Coincidentally, on the same day, starting hearing on Niharika’s case four months after it was registered, the Janakpurdham High Court ordered the authorities concerned to produce the person accused of raping and impregnating her before the court within the next 15 days.

How does she feel now? “Only now the court has ordered the authorities to produce the accused. This has rekindled hope that I will get justice but I am not fully reassured yet,” she told Republica.

Niharika claims she was raped and impregnated. According to her, the incident dates back to October 2019 when she was just 17 years old, a minor. She was studying in Grade 11 and one day she went to her friend’s house where she was raped by her friend’s brother Shivaraj Shrestha of Janakpur. She says that Shrestha made her drink water laced with drugs. As a result, she fell unconscious. When she woke up, she found herself naked. The rapist had taken obscene photographs and videos of her which he used to blackmail her after the incident. She was threatened not to make the incident public or else he would publicize those pictures and videos.

Niharika filed a complaint at the police station 14 days after the incident. “I was mistreated at the police station and they didn’t believe me just because of my appearance. I was wearing pants and a t-shirt,” she says. She underwent medical examination to prove that she had been raped but the reports made another huge reveal: her pregnancy.

She opened up about it to her parents, but they insisted on aborting the child. She was left to choose between her family and her unborn child. “I didn’t want to abort the child who would also be an evidence to prove my suffering,” she shares. She then decided to give birth to the child. Her son was born on August 21, 2020.

Niharika, who was disowned by her family, has been living in Kathmandu in a rented room for the past three years. Her legal fight against the crime began when she reported the case to the police but the conclusions left her in disappointment. Then she knocked on the doors of the Dhanusha District Court, hoping to get justice. However, on February 7, the district court declared Shrestha innocent. Niharika’s son was 17 months old then.

Even after losing the case, Niharika didn’t give up. She went to the Janakpur High Court, which, four months after Niharika filed her appeal, began the hearing on Thursday.

She sought help from different organizations and people, but only a few of them supported her. Among such people are activists Jasmine Ojha and Dev Sharma who came to know about the incident and have been supporting her for a long time.

After several attempts to get justice and after knocking on the doors of different organizations, Rajput decided to stage a hunger-strike in the capital to draw the state’s attention to her plight. She was supported by Ojha and Sharma. They chose a non-violent protest in Maitighar. “We were protesting in Maitighar. One day at around 10PM, some police constables destroyed our tents and hauled us into their van. They beat us up and mistreated us,” Sharma said. “We were taken to the National Center for Children at Risk around 1 in the night from where we were thrown out at 7 in the morning, ” he added.

Sharma shares that they set up the tent in Basantapur by themselves but the police would tell them to leave the place every five minutes. Ojha and Sharma broke their strike on the 5th day after a commitment by the National Women’s Commission to file a petition for the DNA testing of the accused to see if that matches with Niharika’s son.

But Niharika continued her hunger strike as she had declared  that she would do so until justice was served and her demands fulfilled. Her five-point demand includes: arresting the accused who is roaming freely and investigating him, testing the DNA of accused Shrestha to see if it matches with that of her son, prompt decision by the high court on the case that was reported four months ago, a re-investigation of the entire incident, and ensuring care and safety of her 21 months old son.

“In this country, one has to die in order to get justice,” Niharika said.

According to the National Women’s Commission, the alleged rapist Shrestha will undergo a DNA test soon. In addition, the victim will receive financial support from the Ministry of Home Affairs.

On behalf of the government, Home Ministry’s Joint Secretary Shivaram Pokharel and Under Secretary Basanta Bhattarai have signed the deal with Niharika and the activists.

Niharika’s story has become an example for many women who go through violence and struggle in their everyday lives but wake up with hopes each day and continue their fight against the injustice around them. It is yet to be seen if Niharika’s five-point demands will actually be fulfilled but her fight for justice continues.

As much as it is important for Niharika’s story to inspire victims to speak up against injustice, it must impact the lives of the abusers too and that is what will certainly make a difference.

“I am not fighting to find a father for my child, but to get justice against my rapist,” said Niharika with grim determination.

KATHMANDU, June 17: A five-point agreement has been reached between the government and Sonali Kumari Singh (Niharika Rajput) of Jaleswar... Read More...

KATHMANDU, June 26: In order to pressurize the authorities to come up with a better covid-19 response, social activist ‘Iih’ who... Read More...

Dahal is guilty in SPP: UML Chairman Oli
8 minutes ago