When the clock strikes 12 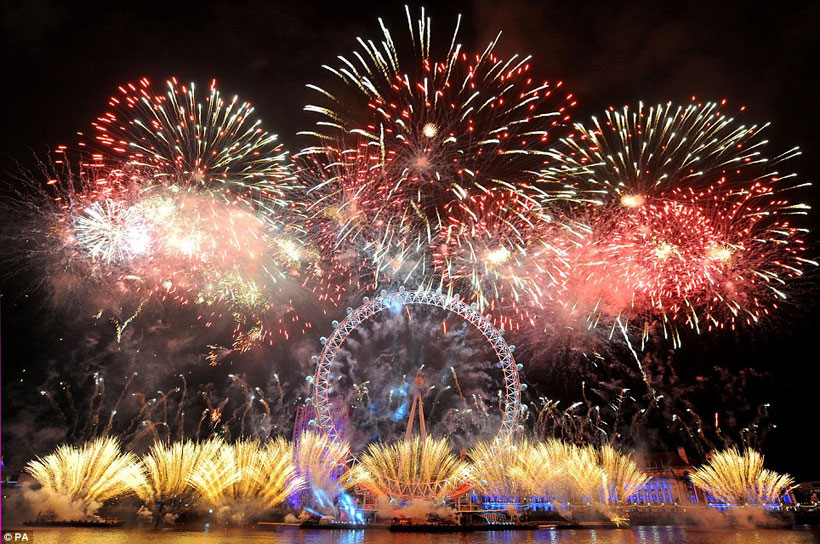 New Year celebrations around the world

Different places usher in the New Year in their own unique ways. In some places, fireworks light up the night sky while in some people can enjoy glorious waterworks when the clock strikes 12. The Week presents you a selection of best places to welcome the New Year because of their unique traditions.

Lighting up the eye

Most people in London go to the New Years Eve fireworks show that happens at the London eye. It has been a ticketed event for a few years now in order to avoid overcrowding. If the tickets have been sold out, there are plenty other options to watch the fireworks from. There are many cruises and speedboats along the Thames River that offer a breathtaking view of the firework display along with food, drinks, and music.

The English believe that the first guest of the year will bring good fortune to them, and they usher in a male who comes bearing traditional gifts. These gifts include a loaf of bread for the kitchen, wine for the head of the family and coals for the fireplace. Without these gifts the person isn’t allowed to enter the house.

Every year, as the earth makes another round of the sun, the eyes of the whole world falls on the electrifying energy in Times Square, New York. Almost a billion people worldwide watch the star studded, musical ball drop that has become a global tradition, collectively bidding farewell to the departing year and expressing hope and joy for the one ahead. The square itself is divided into different viewing sections that people are directed to sequentially and ‘ball drop passes’ are available that gives you exclusive entrance to some of the most happening parties around Times Square.

A walk down the avenue

New Year celebrations in Paris last an entire month till the beginning of February. The biggest New Year parties happen at Moulin Rouge, Trocadero, Sacre Coeur, and the Eiffel Tower. Some people prefer to go out into the sea from where they can witness the city lights and have an unobstructed view of the fireworks show at the stroke of midnight with the company of family, good food, wine and music. Most people, however, go to Champs-Elysees, also known as the world’s most beautiful avenue to witness the New Year show that starts at 11:30 pm where 3D images are projected on the Arc de Triomphe.
On the day of the eve, a traditional ceremony where a special festive cake called ‘La galette des rois’ is cut. The le Réveillon de Saint-Sylvestre is planned which is a special dinner that the French believe will bring prosperity and good luck to those who attend it.

Fireworks and water shows in Sydney

The first ones to welcome the New Year, the Sydney celebrations and fireworks begin early with the first show starting at 6 pm. Along with the sky show, there are stunning water displays created by fire tugs, which are watercrafts that are made to fight shoreline and ship fires. Especially targeted for people with small children, a Harbor of Lights parade is followed by an enchanting display of fireworks. Right at the stroke of midnight, fireworks erupt from the opera house, the Harbor Bridge and barges on the water to create a dazzling display of fireworks that people from all over the country travel to see. You can enjoy this display from many areas surrounding the opera house, on boats and even on small islands that are transformed and host Caribbean themed parties.

At midnight on new year’s eve, churches in Australia ring their bells twelve times to formally announce the arrival of the new year and people celebrate by cheering and making noise through drums, trumpets and other musical instruments.

New Years eve in Rio is one of the most magical and unforgettable nights. The Copacabana beach festival for new years is the biggest event second only to the Rio Carnival. Thousands of people flock the beach in white as it is said to bring good luck in the upcoming year. At midnight, a spectacular 20-minute display of firework marks the beginning of a new year.

Believing that lentils are a sign of prosperity and wealth, they serve items made of legumes like soup or rice on the first day of the New Year. A sacrificial boat filled with flowers, candles and jewelry is pushed off from a beach onto the ocean to bring health, wealth and happiness.

Party the night away

Between the two kilometers long stretch of Brandenburg Gate and the Victory Column in Berlin, the biggest street party in Europe happens on the New Years Eve. About a million people gather here to collectively welcome the New Year. The free entrance party with DJ, live music and fireworks display attracts people from the neighboring countries as well. With no official closing time, the party kicks off at 7 pm with people starting to pour in around 2 pm to watch the bands rehearsing.

The Germans pour molten lead into cold water and believe that the shape it takes predicts what lies in the future for them. Round shapes symbolize good luck and a heart shape symbolizes marriage. Similarly, if the lead takes the shape of an anchor it means that you need some kind of help and a cross means someone’s demise.

The Puerta del Sol Square in Madrid is one of the biggest places to celebrate new year in Spain. Thousands of people gather here with masks, wigs and hat and there is a constant rain of confetti and streamers everywhere. There is music blaring in the background and the atmosphere is that of joy and happiness. The actual party begins after the 12 strikes of midnight are complete.

At the stroke of midnight, as the clock starts tolling, it is believed that eating grapes in synchrony with the ringing of the bell will bring in a year of prosperity and good luck. Eaten one by one with each toll of the bell, thousands of people out celebrating eat it together but only a few eat and finish eating all the grapes on time.

Hiking for a view

Syntagma square in Athens is always full of surprises, with the full program not being released till the last possible moment; it is always exciting for the people to pop by to see what is happening. A city that has seen a rapid growth of rooftop restaurants and bars, there is a plethora of choices for places to be in to watch the firework display that happens at midnight. There are two vantage points that some people choose to trek up and have a picnic and enjoy the shimmering light above and below them.

New Years is also called the St, Basil’s Day in Greece; after the death anniversary of one of the forefathers of the Greek Church. People bake special bread on this day with a coin buried in the loaf. The first slice of the bread is offered to God, the second to the breadwinner and the third to the house itself. If the coin is in the loaf meant for the house then it means that spring that year will come early. If it isn’t then whoever gets the coin is thought to be blessed with extra luck that year.

Stroll down the streets of Rome

Most of the people in Rome have dinner parties they attend before venturing out to soak up the atmosphere of New Years Eve. There is an array of parties and free concerts to choose from during the most happening night of the year. The biggest celebration happens at the piazza del Popolo where the popular local bands and the fireworks attract huge number of people. The Monument of Vittorio Emanuele II, Plazza Navona and the Colosseum are the most popular countdown places for the new year with a large number of people gathered to watch the fireworks. All the historical places are decorated with vibrant lights making just taking a stroll down the street one of the most mesmerizing walks of your life.

The New Year’s celebration here last for three days where the house is decorated with colorful lights and greenery. Gifts are also exchanged. Gold and silver are given for prosperity, honey for sweetness etc.

Cruise down the Nile

One of the most popular things to do in Cairo during the New Years Eve is taking a cruise ship down the Nile River. There are many cruises that offer romantic countdown dinners and holiday celebration packages. These cruises offer a spectacular view of the fireworks that light the skies over the pyramids. For those looking forward to a night of partying, there are many clubs lined up with exciting DJs to ring in the new year.

The Egyptians believe that only when the crescent moon is visible in the sky does the New Year begin and the official announcement of the beginning of the year is made at the mosque.