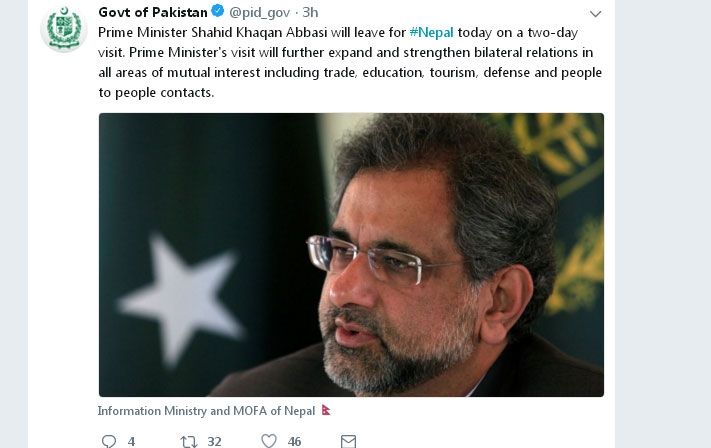 Posting a message on its official Twitter, Pakistani government said, “Prime Minister Shahid Khaqan Abbasi will leave for #Nepal today on a two-day visit. Prime Minister's visit will further expand and strengthen bilateral relations in all areas of mutual interest including trade, education, tourism, defense and people to people contacts. “

The twitter name is verified and that the message has been posted with hashtag #Nepal. The message said that the visit is aimed at expanding and strengthening bilateral relations in all areas of mutual interest including trade, education and tourism among others between the two countries.

When asked Nepal’s Ministry of Foreign Affairs, it denied any information regarding this. Similarly, the Pakistani Embassy in Kathmandu also confirmed that there is no such schedule about Pakistani Prime Minister Abbasi’s Nepal visit.

The message has been posted eight days before Indian Prime Minister Narendra Modi’s visit to Nepal.

Indian Prime Minister Modi is coming to Nepal on a two day official visit on May 11.