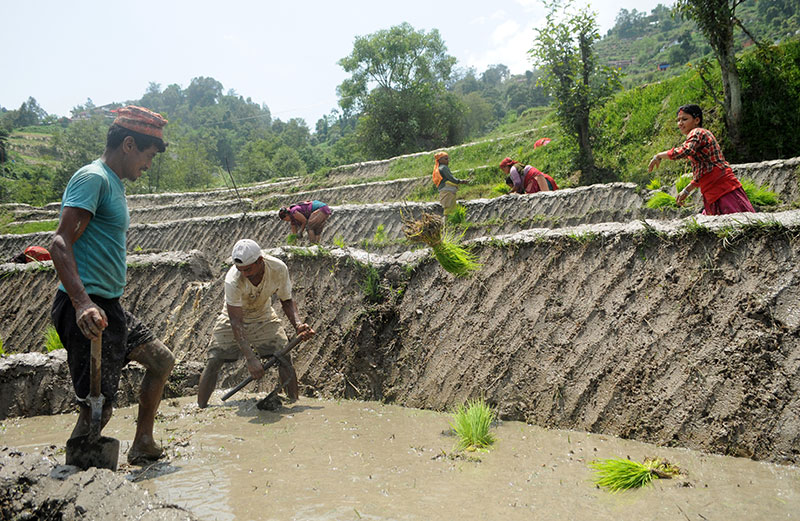 “If you leave the land that nurtured you, that fed you and that enabled you to become what you are today barren, it will curse you,” says my mother
Urbanites tend to romanticize paddy plantation. They dirty their shining dress with wet mud, smile to the cameras, take a selfie or two and post them on Facebook. The person who heads the Ministry of Agriculture goes a step ahead. Last year, then agriculture minister Hari Parajuli made headlines by overwhelming a woman with a forceful hug and what seemed like an attempt of molestation. He was celebrating National Rice Day.

His successor Haribol Gajurel came up with a different antic this year. He planted paddy saplings into a flower-vase. This is emblematic of how ministers tend to trivialize the most excruciating work of farming.

Paddy plantation is perhaps the most tiring, most difficult and the least rewarding work in Nepal. You have to work the whole day in the field, digging and smoothening the muddy fields. You puff and pant and sweat. The whole body is enveloped with mud. Mud clogs your finger and toe nails and it hurts badly (using farming boots and gloves is unheard of in Nepal).

Then it rains as if heaven will fall upon you as you are working. You get wet like a drowned rat but there is no giving up. It’s a collective work. If a single member of the team—the plowman, the digger or the planter—cheats the whole thing is stuck. If you are not a regular farm-laborer, your body will bulge with pain for days. You will get blisters on your palms and your skin develops rashes.

Farm laborers in villages have to battle scorching heat and heavy downpour for two months continuously. So when planting works come to an end, village farmers have scars all over their legs and arms. Some of them have high fever, followed by typhoid.

Every morsel of rice we eat has somebody’s sweat invested in it. Our every burp has its origin in sweat and blood of farmers in the hinterlands. But we seem blithely content.

According to Nepal Rastra Bank, Nepal imported rice and paddy worth Rs 9.91 billion last fiscal from India. We have already bought rice worth Rs 13.43 billion this year. This dependence will prove suicidal one day. The drought this year affected 330 million Indians, leading to mass crop failures and suicides. If famine hits India and it stops exporting rice and paddy to Nepal, we will also starve. Why have not we produced enough to feed ourselves?

I cannot say for Tarai plains but in hilly villages, we have stopped a number of farming activities that used to be mainstays of rural economy.

People have stopped keeping cows and buffaloes. They have stopped growing vegetables in their backyards. They buy vegetables and imported rice for consumption. Youth have fled either to Kathmandu or to the Middle East.  Those who remain are local teachers and the elderly who cannot do field-work. The comfortable middleclass (by the rural standard) do not dirty their hands in the fields. The practice of sharecropping is fast declining. Only the poorest of the poor do farming.

Farming is the last thing in people’s mind as there is no guarantee of good harvest. The return depends on the mercy of heavens. Nepal’s major river systems, which can provide enough water for irrigation even in dry season, flow down through the hills. But we have failed to tap them.

Nepal’s hilly lands are among the least irrigated. Only 18 percent of total agricultural land in Nepal has year-round irrigation.

Even if the heavens are on your side and you also have irrigation facilities, even then there is no guarantee of good harvest. Hailstones during harvest season often destroy everything. A number of farmers lose their harvests to a flash of lightning and hailstones every year.

Even if farmers decide to take risks, the cost of cultivation is too high. You do not get paid laborers due to acute shortage of labor force. The time, money and energy you invest in farming will not buy you enough to feed a family of four for six months. No wonder, these difficulties have forced a number of families to migrate to the Tarai plains. Villages in western and eastern hilly regions are emptying out at a rate never witnessed before.

These factors contribute to converting more and more arable lands of the hills into barren fields. Thanks to the Tarai plains and rice imports from India, the hill population still gets enough to eat. Tarai, which grows food grains in abundance, has been compensating food shortage of the hills so far.

So the agriculture sector that claims to employ about 66 percent of the country’s population and contribute 33 percent to GDP is on the verge of collapse. Yet the national focus has not shifted to reviving agriculture.

Countries take food issues seriously. According to a 2015 Forbes report, China has bought about 12 million acres of land in Africa, which is a home to seventy percent of world’s uncultivated arable land, to grow grains like sesame, wheat and corn. These grains are directly shipped to China to feed its people, according to the report.

In Nepal a few good measures that have been introduced to revive agriculture are either hard to implement or are limited to paperwork. The government introduced crop and livestock insurance scheme in the fiscal 2013/14. But there were few takers because the farmers are unaware of this provision and premium is high for poor farmers.

The Ministry of Agriculture Development has proposed a pension scheme for farmers involved in agriculture works continuously for 20 years. But there is no guarantee of this being implemented.

Then there is punishment measure. Any farmer who keeps his land barren will be imposed up to 25 percent of potential production in fines, the government announced this year.

None of these incentives and deterrents is likely to bear fruit unless we revamp our agriculture system, equipping it with modern technology and get ourselves back in the field. We need to improve our irrigation system, and provide productive seeds and fertilizers to farmers on time. It is important to assure farmers that every drop of their sweat counts and it will be rewarded. If we could effectively implement insurance system and include as many farmers as possible, it will help establish farming as a dignified profession. But farming and agriculture is still considered the responsibility of the poor in Nepal.

Every planting season my mother, in her mid sixties, worries that the little land that we have will remain fallow. She calls us home to plant crops.

So I was in my village in Sindhupalchok last week to make her feel we care about the land. She knows about the recent government policy to penalize farmers who keep their land barren. But this is not what troubles her the most.

It’s not possible to come to village every summer by taking leave from office, I told her. “It’s easy for you to say leave the land barren come with me to Kathmandu,” she argued. “But do you know its consequences?”

“If you leave the land that nurtured you, that fed you and that enabled you to become what you are today barren, it will curse you,” she said, “the land knows whether you have loved it or abandoned it.” My mother never went to school. She was not philosophizing but to me she seemed to echo Pearl S Buck, who in The Good Earth, says “land is one’s flesh and blood.”

I felt this is the conviction that we need to instill to revive agriculture. Other things are secondary.

The world is a beautiful place in terms of many things. Indeed, each nation has a unique identity that makes... Read More...