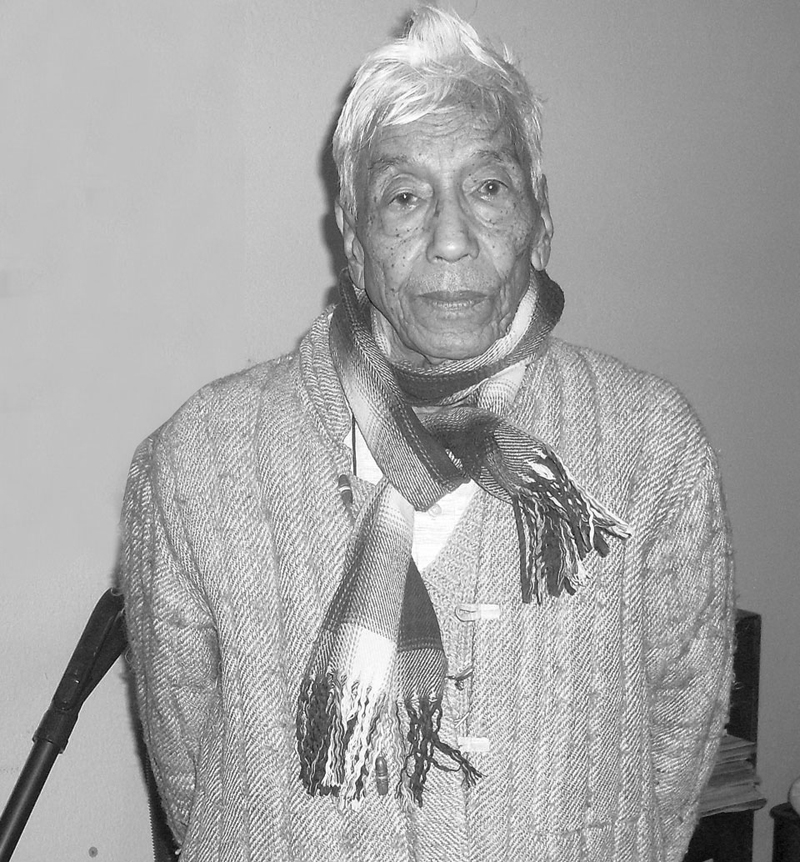 It seems when Mother Goddess is done with formation of the likes of Joshi, She destroys the mould for the fear that too many dreamers may stop the earth from turning on its axis.

The metaphor is hackneyed; but it describes the passing away of Ram Hari Joshi, 91, perfectly: He did indeed fall like an aged and hollowed-out tree on some solid rock deep inside a forest. In fact, in the urban jungle called Kathmandu, quite a few in his own party didn’t even know that the old warhorse of Nepali Congress (NC) was still alive, though not really kicking. He had become so irrelevant in later years that even though an old-school socialist wedded to the idea of living the life of austerity, he was made to spend his last days in one of the most expensive medical facilities of the country.

In complete disregard of his last wishes, ostentatious ceremonies preceded last rites of a person with egalitarian beliefs as oligarchic free-market fundamentalists of various political parties lined up to pay obligatory respect to the departed soul in their monstrous SUVs. It was an anomalous way to mark the passing of an unwavering Gandhian who never failed to stand up for probity in public life. But paradox combined with poverty of imagination is the hallmark of politics in nascent democracies. After all, it didn’t take very long for self-serving acolytes of the Mahatma to consign his memory to office walls and banknotes in an attempt to tear him away from the hearts of the masses.

Having once been the headmaster of a high-school—that’s the reason a large number of post-1960 politicos of Madhes, irrespective of their party affiliations, continued to refer to him as Gurudev—and one of the founding fathers of NC, he seldom refrained from castigating a wrongdoer, sometimes in full public view. That alienated him further away from majority of his party members as NC was transformed into a loose coalition of power-seekers completely bereft of ideological convictions.

In the Bahunistic culture of democracy, where every wearer of sacred thread or holder of a formal degree is convinced that his inanities are as valid as the deep knowledge of a learned person or the wisdom of an organic intellectual, Joshi was often ill at ease in holding any meaningful conversation with younger cadres. He never stopped speaking, but less and less people had the time to hear his views and almost nobody took them seriously.

It must have been even more painful for Joshi than it was to his likeminded colleagues such as Bhim Bahadur Tamang or Maheshwar Prasad Singh to accept that the NC—the once revolutionary party of the 1950s that they had joined to transform polity and society—had degenerated into being one of the prime purveyors of conservatism. All of them saw their dreams of inclusive Nepal disintegrate step by step and then die a slow and painful death. He had to endure the legalization of conservatism through a regressive constitution in the garb of republicanism.

In the philosophy of classical conservatism, maintenance of stability, enforcement of law and order, and protection of customs and traditions are paramount considerations. The ideology is skeptical of change and prioritizes competence over equality, status quo over change, and ground realities over aspirations of the people. The 16-Point Conspiracy (SPC) reached between four political parties in the wake of Gorkha Earthquakes adopted conservatism as the fundamental principle of a fresh statute, which was then fast-tracked through the legislature to establish its legitimacy.

Complicity of all the four parties in SPC notwithstanding, history will hold NC responsible for rushing through a controversial constitution through the brute force of legislative majority despite strong protests in the streets of Madhes. No matter how many amendments are adopted in the charter, September 20, 2015 shall remained etched as a ‘Black Day’ in the memories of many Madhesis forever. It must have been extremely painful for Joshi to realize that he had been politically and socially divorced from his constituents towards the end of his life.

Even conservatism has a saving grace: It proposes that elites can exercise the right to rule as long as they act responsibly for the welfare of others. The rhetoric of nationalism—as opposed to the political idea of nationality—frees the ruling elite from shouldering the burden of ‘others’ and concentrate on protecting interests of the ‘nation of the self’, which invariably consists exclusively of the dominant ethnicity.

Cultural connotations of the term ‘Nepali’ in the preamble of the contested constitution are reinforced as the statute goes on to define ‘Khas-Arya’ ethnicity later in the charter. In the hierarchy of identities, Khas-Arya is the only constitutionally defined category; all others shall have to rely upon lesser laws for their position in the socio-political pecking order. Joshi was a Newar of Madhes and must have suffered a huge crisis of identity as NC formally adopted Maale-Mandale template of bigoted, chauvinistic and xenophobic nationalism.

There is yet another incongruity with which politicos of Pahadi origin with home base in Madhes have to struggle—they have to constantly make attempts to overcome deeply ingrained biases of the parent community in order to truly represent their constituents. Unable to resolve inherent contradictions, most of such politicos begin to spout virtues of assimilative policies. Whether it’s Pushpa Kamal Dahal or Madhav Kumar Nepal, they are better representatives of their community than that of their constituents.

For long, stalwarts of NC in Madhes imbibed values of noblesse oblige (privilege entails responsibility) to fight their inherited prejudices. Though nebulous, the first thing that the concept of noblesse oblige requires is that a person learn to check his privileges. Acknowledgement of intersectionality (the idea that different minorities experience oppression differently) and recognition of multiple marginalizations of dominated groups are next two steps. Much before these definitional terms gained currency, such ideas had become driving forces of politics among the romantic revolutionaries of 1950s.

Service and self-sacrifice as ideals of politics and integrity, humility, and generosity as basic characteristics of people in public life emerged to neutralize natural animosity of the downtrodden towards members of the dominant community.  When Madhesis elected Saroj Koirala or put their faith in Pradip Giri, it is out of respect for the sacrifices such leaders had made. But when they elected Ramkumar Bhattarai or voted Bhim Acharya and Hari Uprety, it was more out of fear or greed than a faith in their personal integrity or confidence in the political agenda of their party.

With the conviction that made Joshi spend some of the best years of his life behind bars becoming extraneous to mainstream politics, he probably felt that he had been chasing a mirage. Mid-1990s onwards, it appeared that he had been fighting a losing battle with full realization that the game was over regardless of its final outcome. Being a Gandhian, he refused to accept defeat and remained true to his beliefs regardless.

It seems that when Mother Goddess is done with the formation of the likes of Joshi, She destroys the mould for the fear that too many dreamers may stop the earth from going round and round in circles on its own axis. Ruthless doers ultimately prevail upon idealistic dreamers; and cycles of war and peace, famine and floods, bravery and cowardice and life and death goes on in Her creation.

In the euphoric innocence of early 1990s, Joshi perhaps failed to realize that he wasn’t made of ministerial material. The decline of his public life began the day he accepted to become a minister in the cabinet of Girija Prasad Koirala, which was formed to fight one of the fundamental faiths of the party—socialism—to forward a different version of political economy. Money was the most powerful deity of the day and he was unaware of rituals of market mechanism.

It was after Govinda Raj Joshi had taken over the reins of National Education Commission from Joshi that it recommended that “the privatization of education be encouraged, as it is a recipe for sparking off popular participation, ensuring competitiveness, stimulating innovations, and bringing about diversification and expansion.” The step did no such thing. It merely created fertile ground for production of unequal citizens and intensify inequalities of community, caste, class and ethnicity.

Open skies ended the natural monopoly of the state in the aviation sector and Joshi had to put his signature upon one of the formative decisions of the LPG campaign. Without ever realizing, socialists in the NC shot their own dreams in the foot in the early-1990s; they are just dying one by one due to ideological gangrene. Homage Gurudev, you shall live in legends and memories despite your contentious legacies.

CHITWAN, April 23: With the death of one more female tiger on Sunday, a total of five tigers have died in... Read More...