Tale of a bus mishap victim who escaped death narrowly…

The caller was a passenger of the bus that had met with an accident. His name was Ritesh Thakur.

The bus, Ga 1 Kha 3790, en-route to Pokhara from Gaur, the district headquarters of southern district Rautahat, had met with an accident. An hour after the call, the Chitwan police was able to locate the accident site.

“The bus plunged into the Trishuli River, triggering panic in us. I jumped off the falling bus to escape death,” Ritesh, a victim, who is undergoing treatment at Bharatpur Medical College, recounted his ordeal, adding, “ I had my mobile with me and informed the police about the accident.”

The police do not have exact figure as to how many passengers were travelling in the ill-fated bus.  As many as 21 dead bodies were retrieved while 16 injured were rescued. According to SP Basanta Kunwar of District Police Office, Chitwan, 43 passengers including three bus staff members were in the bus.

The bus had veered off the road and plunged into the Trishuli River at Kalikhola of Chandibhanjyang-5, four kilometers west of Mugling. The incident site was slightly steep and winding.  The police are yet to find out the cause behind the accident.

“The narrowness of the road, driver’s negligence or a technical fault could be responsible for the accident. We have started investigation into the case," Inspector Rajan Bhetwal of District Traffic Police Office, Chitwan told Republica Online.

A video report (Nagarik Show) on the Kalikhola, where the incident took place, along the Mugling-Narayangadh road section had been, presented some weeks ago.

Watch the incident site on video: 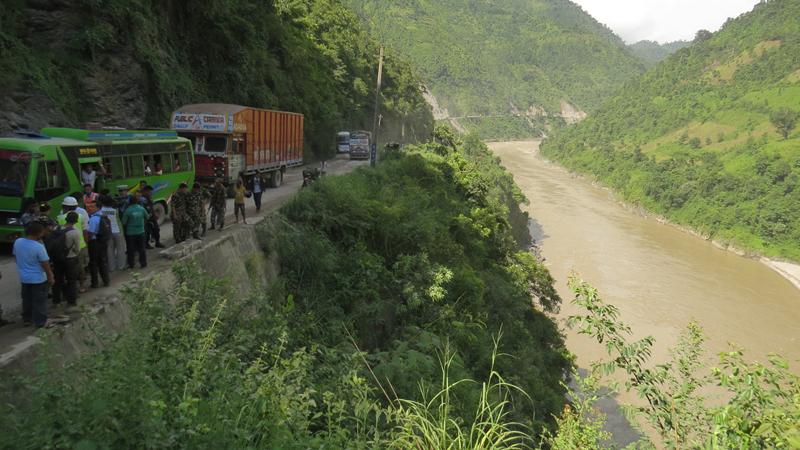 BANEPA, Aug 15: The death toll  in the Kavre bus accident has reached 31. Preparations are being made to airlift... Read More...