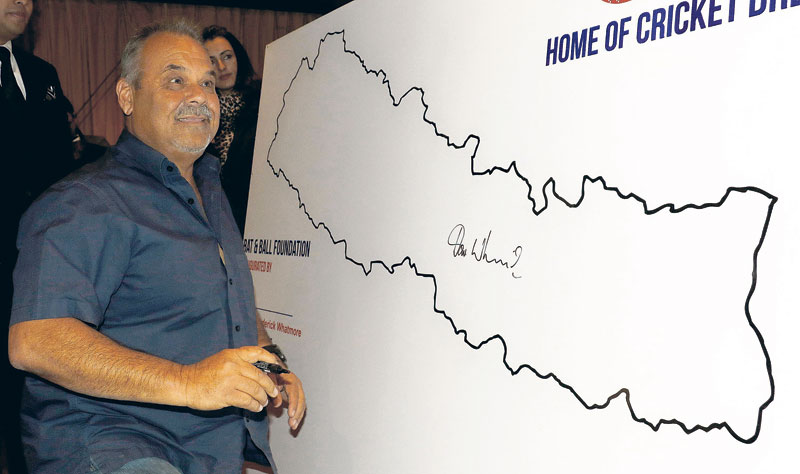 KATHMANDU, Jan 24: The newly-formed Bat and Ball Foundation (B2F) has brought renowned Australian cricket coach Davenell Frederick “Dav” Whatmore during its launching ceremony on Monday with a view to provide two-week training for national cricket players among others.

Dav Whatmore, the world cup winning coach with Sri Lanka in 1996, will provide two-week high performance training camp from January 25 to February 7 to 32 players besides a two-day coaching clinic to cricket coaches.

He will train the shortlisted players among 52 called for the Super League to pick national team for Nepal's ICC World Cricket League Championship fifth round match against Kenya. Nepal is scheduled to take on Kenya on March 11 and 13 at TU grounds, Kirtipur.

“The foundation has brought very big name of cricket and it is a great opportunity for cricketers and coaches. His visit has been possible at the time when we are preparing for World Cricket League Championship matches against Kenya and we would like to make the best use of the opportunity. As players, we are very keen to undergo the high performance camp under him. We will have best 32 players and that will add to our preparation for sure,” national cricket team skipper Paras Khadka said during the launching ceremony.

Paras, also the general secretary of Cricket Players' Association of Nepal, said that they were ready to coordinate with B2F for the sake of game.

Whatmore who officially launched the B2F dedicated to Nepali cricket said that the level of players was much better than many people perceive about it. “The calibres of players here have been much better than lot of people think. I think I might put my hand up being one of those. I am very interested to spend my time here with the guys to give as much as I can to ensure that they improve,” said the Sri Lanka born Australian who has mentored players in Sri Lanka, Bangladesh, Pakistan and Zimbabwe.

Whatmore, who has played seven Test matches and one ODI match for Australia, said that Nepal's run in the highest level of Associate cricket was the proof of skill and talents of home-grown cricketers. “The fact that you're playing in the highest of the Associates in the World Cricket League is a testament to the level of skill and talent that exists in this country,” he said regarding Nepal's run the World Cricket League Championship. “From that point of view there is no question about the integrity of the boys here in terms of the skill. What we need to do is give them more information and opportunity for that skill and talent to grow.”

Speaking on the occasion, B2F Chairman Paras Shakya said that the foundation was created to provide the best platform for players and a project to modernise Nepali cricket and to connect society with the spirit of cricket and its culture.

“B2F will work with the social organisations, schools and colleges and work on our own to identify young players who need right coaching, facilities and provide them with right opportunities. The foundation has aimed at building its own academy by 2018,” Shakya said.

Former Cricket Association of Nepal CEO Bhawana Ghimire is the executive director of the Foundation and industrialist Basanta Chaudhary is the patron.

We grew up listening to the infamous phrase: people who play cricket (mispronounced as Kir Ket) are fools, and those... Read More...

Australia OKs Pfizer vaccine, to begin in Feb.
8 hours ago