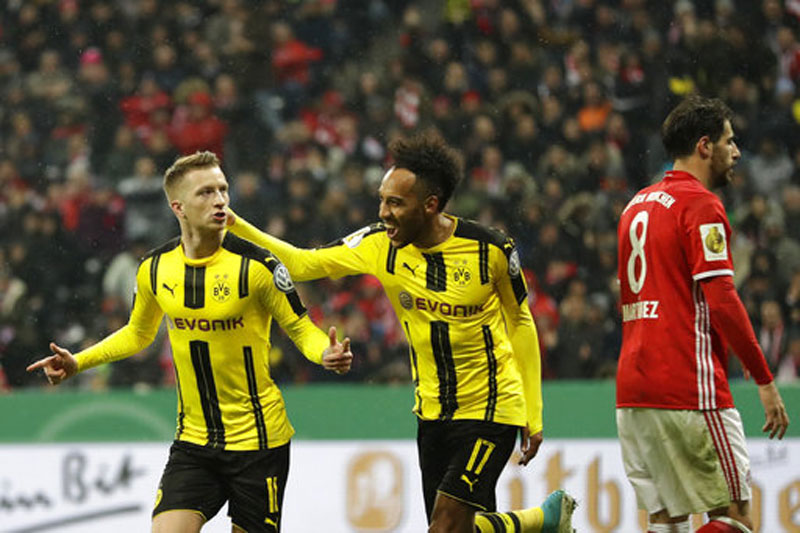 What to watch in the leading football  leagues in Europe this weekend:

With only the Bundesliga left to play for after losing to Real Madrid in the Champions League and Borussia Dortmund in the German Cup, Bayern Munich hopes to wrap up a record fifth straight title as soon as possible.

It could happen on Saturday if Bayern wins in Wolfsburg - which is playing its worst ever Bundesliga season - and if second-place Leipzig doesn't beat Ingolstadt in the earlier game.

Leipzig would secure qualification for the Champions League with a win if fourth-place Hoffenheim loses at home to Eintracht Frankfurt on Sunday.

Last-place Darmstadt needs an unprecedented third straight win, at home against Freiburg on Saturday, to avoid returning to the second division.

Don't be surprised if the Premier League title race gets even tighter this weekend.

Holding a four-point lead over Tottenham with five games left, Chelsea travels on Sunday to an Everton team that has lost only once at home all season and won eight straight games at Goodison Park since the turn of the year, scoring 29 goals.

If Chelsea keeps the lead at four points — or even extends it — the trophy is surely heading to Stamford Bridge for the second time in three years. Chelsea's remaining fixtures are home matches against Watford, Middlesbrough and Sunderland, and an away game against West Bromwich Albion.

Sunderland, which is 12 points adrift of safety, could be the first team relegated this season if it loses to Bournemouth and fourth-to-last Hull gets a draw or win at Southampton.

Barcelona tries to maintain its edge over Real Madrid in the Spanish league when it plays Espanyol in a city derby it has dominated in the last decade.

Espanyol hasn't been much of a rival for Barcelona, which has won 11 of the last 12 games between the teams in official competitions. Espanyol's last victory dates to the 2008-09 season, 17 matches ago.

Barcelona enters Saturday's game carrying the momentum of a last-gasp win in the "clasico" at Madrid and a 7-1 rout of Osasuna at the Camp Nou. Espanyol, sitting in mid-table, is coming off two winless games.

Barcelona is level on points with Madrid, which hosts Valencia earlier Saturday. Barcelona is in front on the head-to-head tiebreaker, but Madrid has a game in hand.

Zinedine Zidane's team already has some of its focus on next week's semifinal against Atletico Madrid in the Champions League.

Roma will have extra motivation to beat Lazio on Sunday in what is likely to be captain Francesco Totti's final capital derby.

Not only is the match crucial for the fight for second spot in Serie A and automatic entry into the Champions League group stage, but Roma will be out to avenge losing the Italian Cup semifinal to its bitter rival.

Roma is second, four points ahead of Napoli, which visits Inter Milan on Sunday. The team that finishes third has to go into a playoff for Europe's premier club competition.

Roma has a more difficult run-in than Napoli as, after the derby, it next faces AC Milan and Juventus before ending its season against Chievo Verona and Genoa. Napoli plays Cagliari, Torino, Fiorentina, and Sampdoria.

Totti's contract runs out at the end of the season and the 40-year-old midfielder is likely to hang up his boots and move upstairs into a director's role at the club where he has spent his entire 25-year career.

Lazio is fourth, seven points behind Napoli and just one ahead of Atalanta which hosts league leader Juventus on Friday.

Sixth-placed AC Milan visits relegation-threatened Crotone on Sunday, looking to maintain its two-point advantage over Inter in the fight for the final Europa League spot.

It's a crucial weekend for Paris Saint-Germain. With four games left to play, the defending champion travels to third-place Nice on Sunday, knowing any other result than a victory would jeopardize its quest for a fifth consecutive title.

PSG, which remains on course to defend its domestic treble after already winning theLeague Cup and making it to the French Cup final, is enjoying a great finish to the season. Unai Emery's side is unbeaten since its 6-1 thrashing at the hands of Barcelona in the Champions League in March, and will be aiming for a 10th consecutive win in all competitions on the Riviera.

Monaco, which hosts Toulouse on Saturday, is above PSG on goal difference, with the Principality side having played a game less. Trailing six points behind Monaco and PSG, Nice has still a shot at the title.

At the bottom of the standings, the relegation battle is still wide open, with the last five teams (Bastia, Nancy, Dijon, Caen, and Lorient) separated by six points only.

What to watch in the leading football leagues in Europe this weekend: ... Read More...

The world’s biggest sporting event, the 2018 World Cup has begun. If you’re looking for some of the best places... Read More...