What Putin wants in Syria 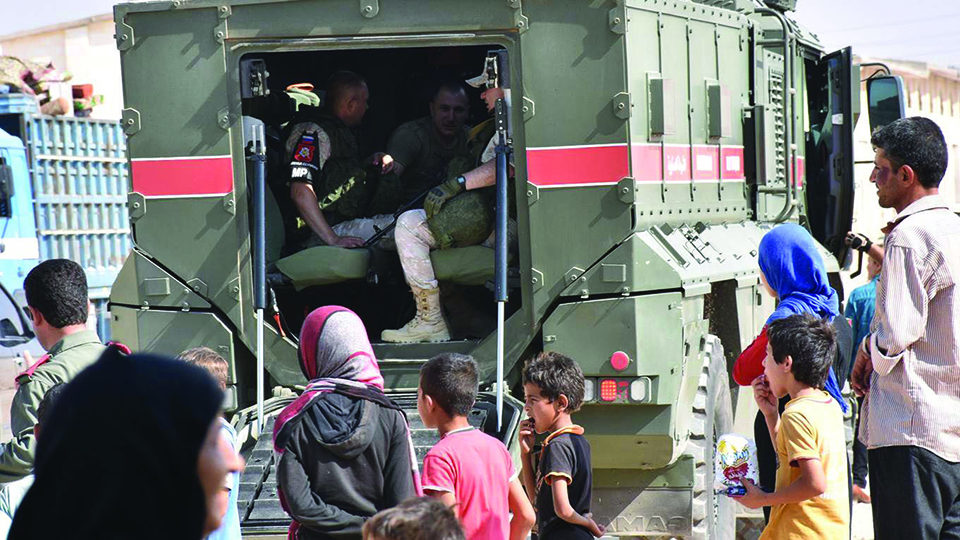 The entire intervention in Syria, including the mercenaries, has been primarily about defending Russian national interests

NEW YORK – On February 7-8, according to Western sources, a US-led airstrike on forces aligned with Syrian President Bashar al-Assad killed at least 300 Russians, all working for the private military firm Wagner. Russia’s Foreign Ministry, however, claims that only five Russian citizens, with no connection to Russia’s armed forces, were killed and a few dozen wounded. Foreign Minister Sergei Lavrov has even condemned Western reports about the deaths as “attempts to speculate on war.”

At first glance, Russia’s response is somewhat surprising. At a time of rising tensions with the United States, the attack amounted to a golden opportunity for the Kremlin to condemn its rival. And, typically, Russia seizes such opportunities: just recently, Russia’s United Nations envoy, Vasily Nebeznya, attacked his US counterpart, Nikki Haley, for calling Vladimir Putin’s “legitimately elected” government a “regime.”
Moreover, Russia is eager to hail its countrymen killed in battle as heroes. The military pilot Roman Filipov, killed in battle a few days before the US airstrike, has been celebrated for his valor. Andrei Malakhov, a television personality on the Kremlin-affiliated Rossiya 1 TV network, is now in Syria shooting a documentary about Filipov.
Yet, in the case of the US-led strike, it was not Russian soldiers who died, but mercenaries, whose participation in the conflict reflects the Kremlin’s desire to maintain plausible deniability. The Russian foreign ministry’s statement in response to the Western reports says it all. “Russian citizens” were in Syria, it said, “of their own free will and for different reasons,” and the “ministry does not have the authority to assess the validity and legality of their decisions.”

Russia has used such forces to do its bidding before, including during the illegal annexation of Crimea in 2014. The Kremlin could then argue that it was not a Russian invasion, but the will of the people living in Crimea.

Similarly, in Syria, mercenaries enable the Kremlin to downplay Russia’s involvement, as well as its losses, which many observers predicted, from the outset of its intervention, would be staggeringly high. Putin surely doesn’t want to be accused of repeating the disastrous Afghan War of 1979-1989, which helped to bring about the Soviet Union’s collapse.

That is why Putin has taken great care to present Russia’s military operation as a limited endeavor, undertaken solely for the purpose of ridding the world of the Islamic State (ISIS). In fact, last December, on a visit to the Russian airbase in Khmeimim, Putin announced the withdrawal of troops, precisely because that objective had officially been achieved. The Ministry of Defense declared that the situation had been “stabilized,” following the elimination of some 35,000 militants and 700 training camps.

So, officially, Russia was to maintain in Syria only limited forces at Russia’s permanent military bases in Tartus and Khmeimim. These forces would carry out “missions related to Russian national interests.” Russian mercenaries, the authorities have been at pains to insist, are not Russian forces.

But the entire intervention in Syria, including the mercenaries, has been primarily about defending Russian national interests. Most obvious, propping up the Assad regime enables Russia to maintain a foothold in the Middle East, while sending the message that popular revolts aimed at overthrowing Russian allies will not succeed.

Russia’s showcasing and testing of new military technology, such as high-precision rockets and other armaments, has reinforced that message. Just last week, in response to the deployment of US stealth fighters and bombers, Russia moved fifth-generation Su-57 fighter jets to Syria, to “test them in real action.”

Another reason for Russia’s continued involvement in Syria is that, by some estimates, more than 5,000 Muslim fighters of Russian origin from Central Asia and the Caucasus are fighting with ISIS there and elsewhere. The Kremlin is understandably concerned about the prospect of radicals with combat experience returning to Russian soil. The Western argument that Russia’s intervention in Syria only increases the likelihood of attacks on Russia’s territory holds little weight with Putin. If the US can defend its invasions of Afghanistan, Iraq, and Syria in terms of national security, Russia can do the same in Syria.

Yunus-Bek Yevkurov, the president of the tiny Russian republic of Ingushetia in the North Caucasus, recently declared that the operation in Syria restored Russia’s reputation as a world power. (Putin wouldn’t admit it, but he covets praise from the leader of Ingushetia, which, like neighboring Chechnya and Dagestan, is often a breeding ground for Islamist radicalism.) He is right: key actors, including Egypt, Iran, Saudi Arabia, and Turkey, are being forced to recognize that Russia must have a say in determining the region’s fate. At a time when international sanctions are exacerbating Russia’s already-grim economic conditions, the Kremlin needs to ensure that its people—and the world –recognize this reality.

Of course, it helps if Russians and others don’t realize how high the cost of such influence really is. So, rather than admit to casualties numbering in the hundreds, the Kremlin needs to underscore Russia’s importance in Syria, its position as a victor over ISIS, and its ability to defend its allies. More fundamentally, before the presidential election March 18, which Putin will win virtually unchallenged, it needs Russians to understand that their choice is either Putin or disarray.

GENEVA, Dec 14: The U.N. Syria envoy has called on Russian President Vladimir Putin to “have the courage” to push... Read More...

KATHMANDU June 7:  On June 4, Russian President Vladimir Putin has signed a bill on counter measures against the US... Read More...