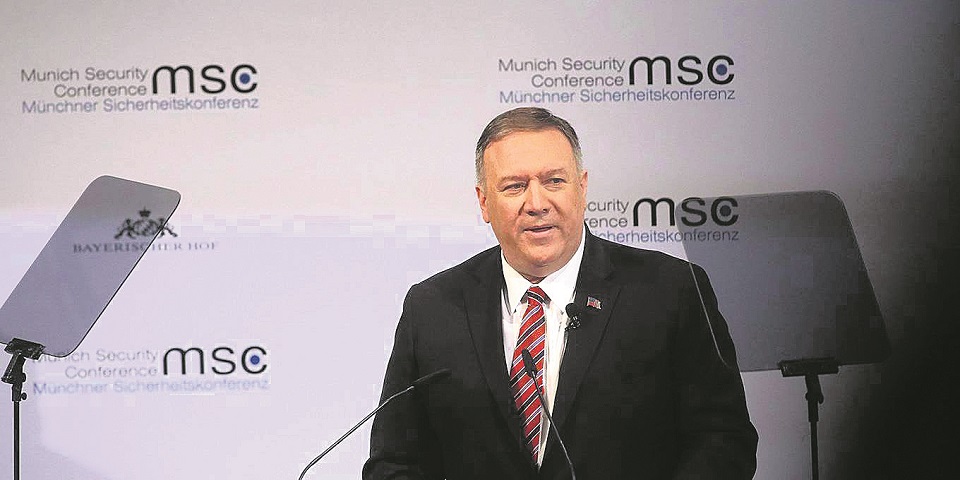 A moral foreign policy not only makes Americans safer, but also makes the world a better place. We judge moral policy by looking at behavior and institutions, acts of commission and omissions, and at all three dimensions of motives, means, and consequences

CAMBRIDGE – Many Americans say they want a moral foreign policy, but disagree on what that means. Using a three-dimensional scorecard encourages us to avoid simplistic answers and to look at the motives, means, and consequences of a US president’s actions.
Consider, for example, the presidencies of Ronald Reagan and the two George Bushes. When people call for a “Reaganite foreign policy,” they mean to highlight the clarity of his rhetoric in the presentation of values. Clearly stated objectives helped educate and motivate the public at home and abroad.

But that was only one aspect of Reagan’s foreign policy. The success of his moral leadership also relied on his means of bargaining and compromise. The key question is whether he was prudent in balancing his objectives and the risks of trying to achieve them.

Reagan’s initial rhetoric in his first term created a dangerous degree of tension and distrust between the United States and the Soviet Union, increasing the risk of a miscalculation or accident leading to war. But it also created incentives to bargain, which Reagan later put to good use when Mikhail Gorbachev came to power in the Soviet Union. Reagan advanced US national interests, and he did so in a manner that did not exclusively benefit American interests.

In contrast, George H.W. Bush, by his own admission, did not promote a transformative foreign-policy vision at the end of the Cold War. His goal was to avoid disaster during a period of rapid and far-reaching geopolitical change. While he referred to a “new world order,” he never spelled out what it would look like. As Bush and his team responded to forces that were largely outside of his control, he set goals that balanced opportunities and prudence.

Bush limited his short-term aims in order to pursue long-term stability, prompting some critics to complain that he did not set more ambitious objectives. Instead, he was prudent in a turbulent time, and managed to achieve American goals in a manner that was not unduly insular and did minimal damage to the interests of foreigners. He was careful not to humiliate Gorbachev and to manage Boris Yeltsin’s transition to leadership in Russia.

With better communication skills, Bush might also have been able to do more to educate the American public about the changing nature of the world they faced after the Cold War. But given the uncertainties of history, and the potential for disaster as the Cold War ended, Bush had one of the best foreign policies of the period after 1945. He allowed the US to benefit from the Cold War’s outcome while avoiding calamity.

His son, George W. Bush, started his first term in office with limited interest in foreign policy, but his objectives became transformational after the terrorist attacks on September 11, 2001. He became focused on national security but turned to the rhetoric of democracy to rally his followers in a time of crisis. His 2002 national security strategy, which came to be called the “Bush Doctrine,” proclaimed that the US would “identify and eliminate terrorists wherever they are, together with the regimes that sustain them.”

In this new game, there were few rules and inadequate attention to the means. Bush’s solution to the terrorist threat was to spread democracy, and a “freedom agenda” thus became the basis of his 2006 national security strategy. But he lacked the means to democratize Iraq. The removal of Saddam Hussein did not accomplish the mission, and inadequate understanding of the context, together with poor planning and management, undercut Bush’s grand objectives. The result was a sectarian civil war in Iraq and a strengthening of the terrorist groups that eventually became the Islamic State (ISIS).

A perpetual problem in US foreign policy is the complexity of the context, which increases the likelihood of unintended consequences. Prudence is sometimes dismissed as mere self-interest, but in foreign policy, it becomes a virtue. Negligent assessment and reckless risk-taking often lead to immoral consequences, or what in legal terms is called “culpable negligence.” Prudence also requires the ability to manage one’s emotions. In both respects, President Donald Trump’s rejection of intelligence and reliance on television sources raises serious moral as well as practical questions about his foreign policy.

That leads, in turn, to the question of the role of institutions and how broadly a president defines America’s national interest. A president’s foreign policy depends not just on specific actions, but also on how a pattern of actions shapes the environment of world politics. Leadership by the world’s most powerful country in the supply of global public goods is consistent with “America First,” but it rests on a broader understanding of that term than Trump has shown. As Henry Kissinger has put it, “calculations of power without a moral dimension will turn every disagreement into a test of  strength… Moral prescriptions without concern for equilibrium, on the other hand, tend toward either crusades or an impotent policy tempting challenges; either extreme risks endangering the coherence of the international order itself.”

Prudence is a necessary virtue for a good foreign policy, but it is not sufficient. American presidents have been prudent when they needed to embrace a broader institutional vision. In the future, a sense of vision and strategy that correctly understands and responds to new technological and environmental changes—such as cyber threats, artificial intelligence, climate change, and pandemics—will be crucial.

A moral foreign policy not only makes Americans safer, but also makes the world a better place. We judge moral policy by looking at behavior and institutions, acts of commission and omissions, and at all three dimensions of motives, means, and consequences. Even then, the nature of foreign policy—with its many contingencies and unforeseen events—means that we will often wind up with mixed verdicts.

Joseph S. Nye, Jr., a professor at Harvard, is the author of “Do Morals Matter? Presidents and Foreign Policy from FDR to Trump”
© 2020 Project Syndicate
www.project-syndicate.org

Though I have held many positions in the past decade, I have always considered myself an educator at the core.... Read More...