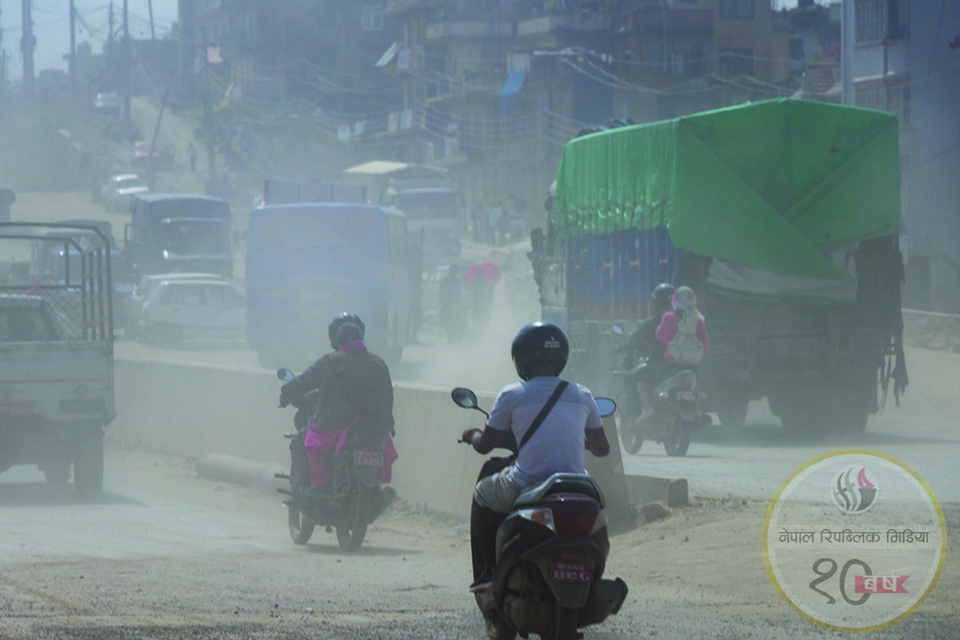 The author is an American volunteer living and working in Kathmandu for the past two months nkolesky@gmail.com
news@myrepublica.com

As a traveler, I’ve seen different countries and societies. While traveling I try to understand how different societies and governments function. During my stay in Nepal, I realized that government here does not work for Nepalis.

There is not a go-to guide on how to run a developing country, but the government should work to stimulate growth and development to help raise quality of life of its citizens. But Nepali government is yet to actively work to cut down on internal corruption and nepotism to best serve the needs of impoverished people, in a country where around one fourth of 30 million people live below the poverty line, where infrastructure is failing and which lacks a clear economic path. There are obvious avenues of development the government can pursue to improve the quality of life.  It can start with Kathmandu Valley.

Lack of proper environmental regulation has allowed Kathmandu to descend to the brink of ecological disaster. Kathmandu is one of the most polluted cities in the world. The Bagmati River has steadily become more and more polluted as the number of people using the river as a waste dump has increased.  In the aftermath of 2015 earthquakes, ensuing rush of people into Kathmandu from more rural areas of the country overloaded Kathmandu’s housing and road systems. Furthermore, Kathmandu’s lay in a bowl shape prevents dust and pollution from being cleared.

When I read newspapers here, I want to see articles about how the government is focused on developing Kathmandu into a modern city, not those about how they are requesting for 160 million rupees to buy a new fleet of cars for the president

As a result of this, respiratory diseases including chronic obstructive pulmonary are prevalent among general population. Viewed from Nagarkot a bubble of smoke and pollution can be seen resting over Kathmandu, filling the lungs of young and old alike with harmful chemicals. One key cause of this is the crumbling transit infrastructure. To say that Nepal’s transit infrastructure is a work in progress would be an exaggeration. There is no clear plan or system to the roads outside of the ring roads around Kathmandu. Rules of the road are even less clear.  In a country with a vast potential for tourism, the government has made no discernible effort to make tourism easy. The government could redirect efforts into building a modern infrastructure, and in doing so could produce a positive effect of cutting down on traffic accidents, reducing air pollution, and making Nepal more accessible for the influx of tourist money. For me, the sight of dust covered roads haphazardly built will be just as memorable as Durbar Square or Garden of Dreams. Fixing the transit system in Nepal would also allow the Nepalis to unite. Creating the possibility for people to come together means that there is a greater exchange of ideas which can only serve to help modernize Nepal and help forward development.

My time in Nepal was mostly spent working as an intern in a Lalitpur hospital, during which I had the opportunity to watch skilled professionals work in high-stress environments. These skilled professionals often talked to me about their desire to move abroad to practice medicine for a variety of factors. They mostly revolved around a desire for a higher quality of life and higher wages. These discussions are symbolic of brain drain (up to one fourth of Nepal’s economy is dependent on reparations) which has deprived Nepal of educated middle class, men and women crucial to sustainable development in sectors ranging from transit infrastructure to healthcare.
Implemented regulations that sorely lack emphasis on quality education and their inactivity in increasing the quality of life risk missing the possibility of internal development. Nepal would be better off by retaining as many educated professionals as possible. The government has to take steps to promote development through the retention of trained professionals capable of contributing to growth.

If you take into account the population differences of the two countries, Nepali government is almost eight times larger than the American government. For a developing country of less than 30 million, it is absurd to have more than 300 members in its parliament. Nepali government should focus on streamlining and cutting out superfluous positions that are a waste of money, including the wages and benefits of politicians, helping ensure that people involved in the government are there because of a desire to improve Nepal rather than for financial and social gains.
Serve the people

The government should serve the people they represent, not themselves. Then the next step should be to implement subsidies to retain educated professionals with higher wages, reinforcing infrastructure projects revolving around road systems and cleaning ecological disaster in Bagmati River, and implementing legislation that helps shift Nepal away from a service-based economy and to a stronger economy with distinct sectors that maintain higher standards.

In a more abstract service-based economy there is little for a government to tax, but the shift to a more transparent economy would allow the government to increase business taxes and lower absurdly high personal taxes.

Nepal government’s lack of governance is preventing the country from developing. When I read newspapers here, I want to see articles about how the government is focused on developing Kathmandu into a modern city, not those about how they are requesting for 160 million rupees to buy a new fleet of cars for the president. By ensuring better governance, Nepal is capable of creating the environment ripe for positive growth and development but until that happens, the government should be held culpable for the abysmal standards of living of people.