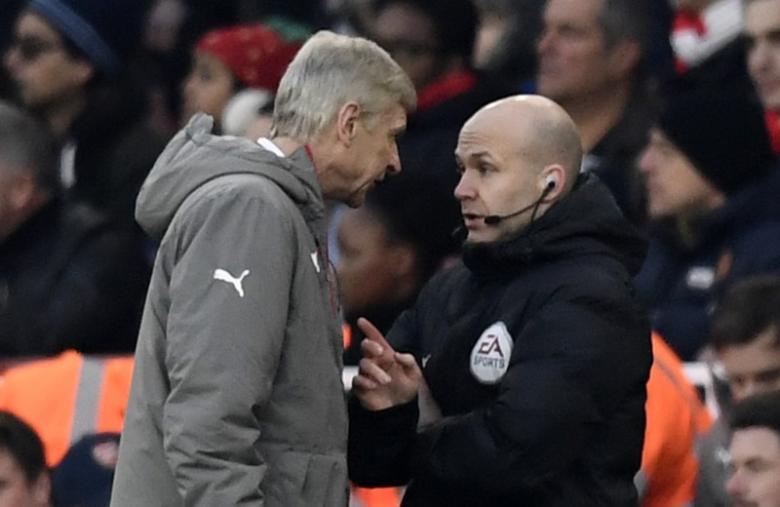 Arsenal Manager Arsene Wenger said he will accept the misconduct charge levied on him by the Football Association (FA) for appearing to push the fourth official during Arsenal's Premier League win over Burnley on Sunday.

Wenger was charged by the FA on Monday after he was sent to the stands by the referee for allegedly using abusive or insulting language towards fourth official after an injury-time penalty was awarded to Burnley.

"Yes, I answered that in the press conference, I have little more to add. I am big enough to stand up for what I do," Wenger told reporters on Thursday when asked if he would accept the charge.

"When I don't behave like I think I should behave, I am big enough to say I am not right. I'm a passionate guy and I believe that I am completely committed in my job and want to win the football games."

Wenger also defended midfielder Granit Xhaka, who received his second red card of the season against Burnley and was investigated by police over an allegation he racially abused a member of staff at Heathrow Airport on Monday.

"There's two incidents -- the sending off was harsh. It was not a dangerous tackle, it was a clumsy tackle. Unfortunately we will lose him for four games (through suspension)," Wenger added.

"I don't think he's a natural tackler. He doesn't master tackling, I'd encourage him to stay on his feet. You can improve it but it's better to stay up.

"He denies completely what happened at Heathrow. I've spoken to him about it and he completely denies it... I've never had a problem with him."

Wenger also confirmed Arsenal "are not on the verge of signing" any players during the January transfer window but right backs Mathieu Debuchy and Carl Jenkinson could be set to leave the north London club.

Arsenal travel to face Southampton in the fourth round of the FA Cup on Saturday before they host Watford in the Premier League three days later.

Nepal not to accept proposed rates for electricity from India

KATHMANDU, July 8: Nepal has refused a proposal to increase price of electricity imported from India by 20 percent. “We... Read More...