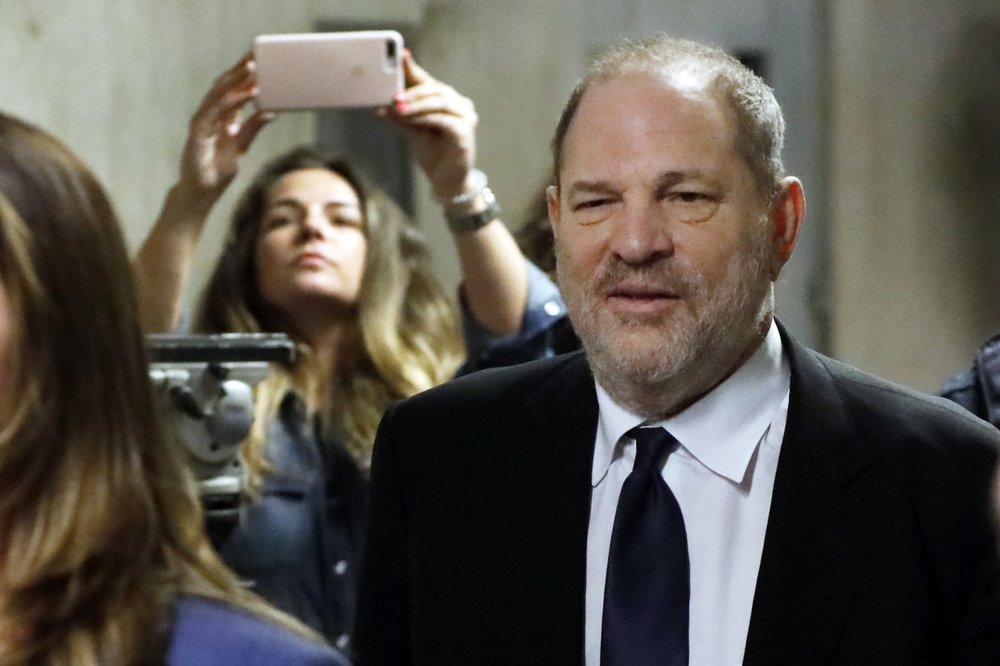 FILE - In this April 26, 2019, file photo, former movie mogul Harvey Weinstein leaves State Supreme Court in New York for a lunch break. Weinstein is recasting his defense team yet again, this time a mere 60 days before he's due to stand trial in New York on sexual assault charges. One lawyer has bolted amid public backlash and another has said they just couldn't get along. (AP Photo/Richard Drew)

NEW YORK, July 11: With one lawyer bolting amid public backlash and another saying he and his client just couldn’t get along, Harvey Weinstein is recasting his defense team yet again, this time a mere 60 days before he’s due to stand trial in New York on sexual assault charges.

Lawyer Jose Baez is going to court Thursday to get a judge’s permission to leave the case in the latest defection from what was once seen as a modern version of O.J. Simpson’s “dream team” of attorneys.

Baez, known for representing high-profile clients such as Casey Anthony, told Judge James Burke in a letter last month that Weinstein has tarnished their relationship by communicating only through other lawyers and by failing to abide by a fee agreement.

“Mr. Weinstein has engaged in behavior that makes this representation unreasonably difficult to carry out effectively and has insisted upon taking actions with which I have fundamental disagreements,” Baez wrote.

As Baez leaves, Weinstein is adding two new lawyers who’ve promised Burke that they won’t seek to postpone the trial from its scheduled

The swap comes after another Weinstein lawyer, Harvard law professor Ronald Sullivan, left in May amid backlash about his involvement.

Sullivan’s involvement in the case drew protests from some students and faculty on the Cambridge, Massachusetts, campus.

Buildings were defaced with graffiti that included the slogans “Down w Sullivan!” ″Your Silence is Violence” and “Whose Side Are You On?” And the university removed him from his position as head of a student house citing “concerns about the climate” within the house.

Weinstein, 67, is charged with raping a woman in 2013 and performing a forcible sex act on a different woman in 2006. He denies the allegations.

Baez and Sullivan started representing Weinstein in January, when the former movie producer overhauled his legal team for the first time. That happened after his original lawyer, Benjamin Brafman, lost a hard-fought bid to get the case thrown out.

Pamela Robillard Mackey, who represented Kobe Bryant in his 2003 Colorado sexual assault case, and ex-Manhattan prosecutor Duncan Levin were also hired in January and have since left.

Weinstein’s new lawyers, Donna Rotunno and Damon Cheronis, both of Chicago, did not return phone calls on Wednesday.

Baez and Sullivan didn’t respond to email inquiries on Wednesday.

Sullivan wrote about the backlash to his representation of Weinstein in a June 24 op-ed in The New York Times, noting that during the 10 years he served as a faculty dean he has represented both sexual assault defendants and accusers in criminal court and student victims in campus Title IX proceedings.

Sullivan said he was “willing to believe that some students felt unsafe” about his involvement in the Weinstein case, but that “feelings alone should not drive university policy.”

“Unchecked emotion has replaced thoughtful reasoning on campus,” he wrote. “Feelings are no longer subjected to evidence, analysis or empirical defense. Angry demands, rather than rigorous arguments, now appear to guide university policy.”

Baez first gained fame representing Anthony, the Florida mom whose televised trial in 2011 ended in an acquittal on charges of killing her young daughter.

Weinstein’s selection of Baez and Sullivan generated some controversy.

One of Weinstein’s accusers, actress Rose McGowan, blasted Baez and Sullivan for agreeing to represent Weinstein after defending her in a drug case last year.

Actress Rose McGowan, one of the first of dozens of women to accuse Weinstein of sexual misconduct, called it a “major conflict of interest.”

Baez and Sullivan denied that, saying McGowan’s case had nothing to do with Weinstein. She is not an accuser in his criminal case.

RICHMOND, Feb 7: The political crisis in Virginia spun out of control Wednesday when the state’s attorney general confessed to... Read More...