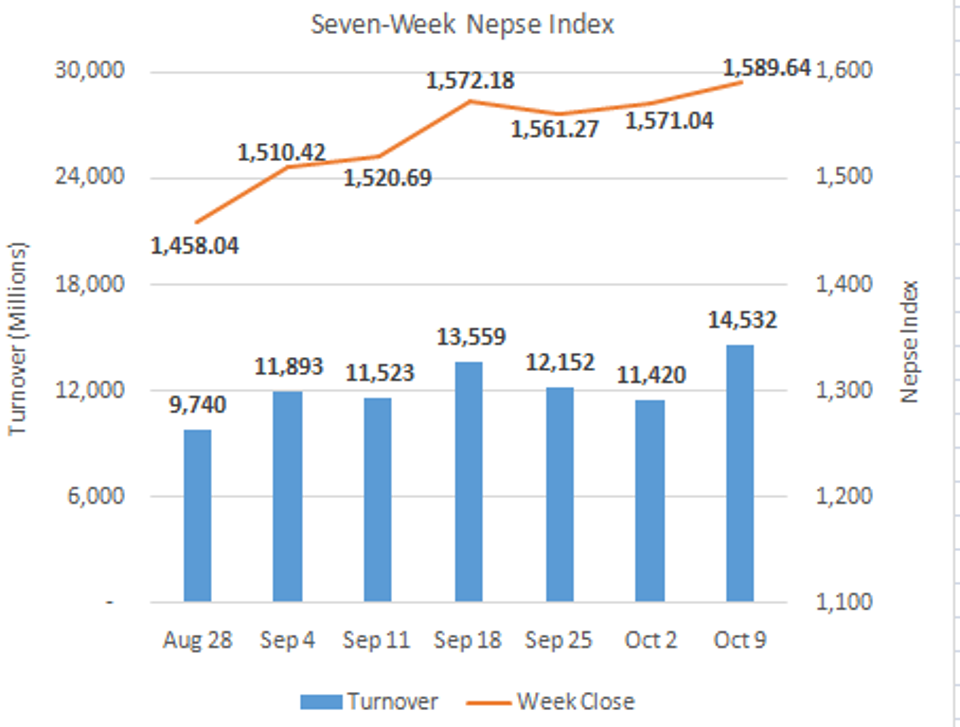 KATHMANDU, Oct 10: The stock market opened this week’s trading on a positive footing as the Nepal Stock Exchange (Nepse) index saw a gain of more than 14 points on Sunday. Following a dip of 3 points on Monday, gains accelerated further with the benchmark adding more than 4 points and 14 points on Tuesday and Wednesday. However, the week’s advance was kept in check with the last trading day of the review period experiencing some selling pressure. Nepse fell more than 11 points on Thursday. Overall, the equity index ended week 18.6 points or 1.18% higher at 1,589.64 points.

While some uncertainty was visible in the week earlier, this week’s trading cleared the air among investors regarding possibility of a notable correction. Despite few sectors closing the week in red, strength seen in majority of the other segments suggest that the buying momentum is yet to lose steam. Added to that, average daily market participation has persistently remained close to record levels. Rs 14.5 billion worth of securities were exchanged in the week on review.

This week, General Insurance Company Ltd’s shares were allotted to applicants on lottery basis. The non-life insurer had opened applications for 3 million unit shares in the week earlier, out of which 2.7 million shares were set aside for general public. 794,546 valid applications were received, while only 273,000 were allotted 10 shares each. Meanwhile, another non-life insurer is floating 3 million Initial Public Offering (IPO) shares. The issuance is open for application until October 11.

ARKS weekly technical analysis indicates a small bullish candlestick formation on the daily timeframe. The long upper-wick reflects that sellers prevailed towards the latter part of the week pulling the index off of its intra-week high. However, the weekly uptrend still is in actions with formation of higher tops and higher bottoms. Further, technical indicators also suggest that the overall bias remains towards positive side. A breach of 1,600 points towards the upside or a rebound at 1,550 points can provide opportunities to go long in the equity market.