Weekly applications for US jobless aid drop to 235,000 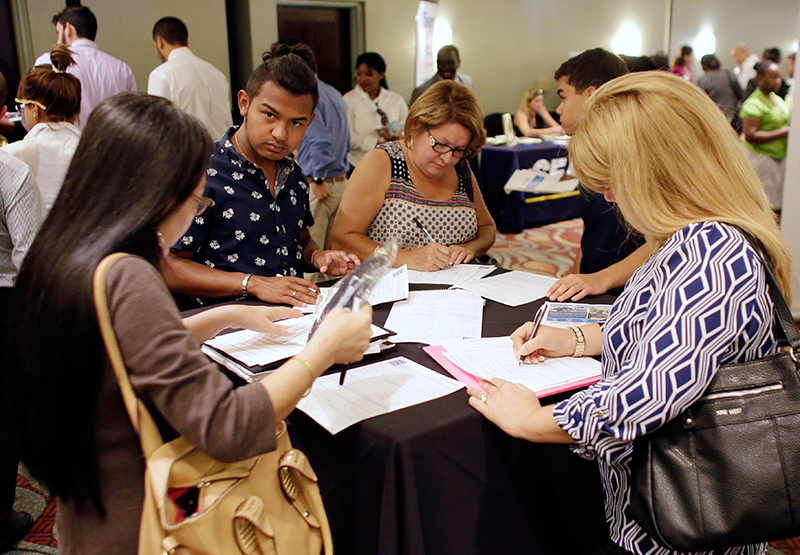 FILE - In this July 19, 2016, file photo, people fill out job applications at a job fair in Miami Lakes, Fla. On Thursday, Dec. 29, 2016, the Labor Department reported that fewer Americans applied for unemployment benefits the week before. (AP )

THE NUMBERS: Weekly requests for jobless aid fell 28,000 to a seasonally adjusted 235,000, the Labor Department said Thursday. That is barely above the 233,000 jobless claims achieved in late November, the lowest weekly total since 1973. The less volatile four-week moving average for claims fell 5,750 to 256,750.

During the past 12 months, the number of people receiving benefits has tumbled 5 percent to 2.1 million.

THE TAKEAWAY: This historically low level of applications for unemployment benefits suggests that employers are holding onto workers and likely looking to add jobs. Weekly claims have stayed below the critical threshold of 300,000 for 96 straight weeks, the longest streak since 1970.

KEY DRIVERS: Employers see the economy as continuing its seven-year expansion into 2017. The stock market ended last year on a relatively strong note, while there are signs of greater consumer confidence among Republicans following Donald Trump's presidential victory.

Employers are expected to add roughly 175,000 jobs in the government's December jobs report, which will be released Friday. This would mark a net monthly gain as the overall economy has added 2.25 million jobs over the past year.

KATHMANDU, Jan 16: The Public Service Commission (PSC) has witnessed oodles of applications- 54th fold of the demand- for the... Read More...