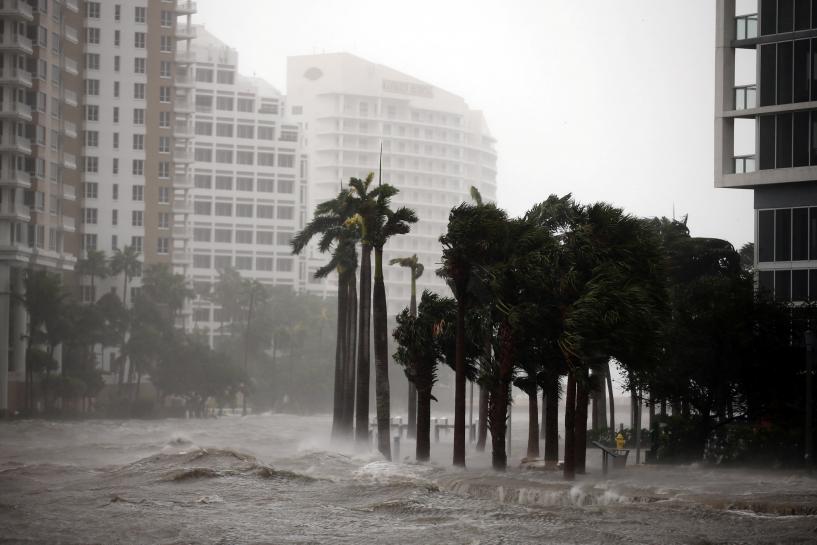 In storm-battered towns up and down Florida’s western shore - from Naples and Fort Myers north through Sarasota, Tampa and St. Petersburg - residents huddled with relatives, neighbors, and pets to ride out a hurricane that had ranked as one of the Atlantic’s most powerful in a century.

“I’ve lived here 21 years, and I never imagined we’d get a direct hit,” Shelli Connelly, 55, said as she stood on the sixth-floor balcony of her high-rise condo on Marco Island, where Irma made its second Florida landfall hours after barreling through the resort archipelago of the Florida Keys.

Opting to stay put with her four dogs rather than join evacuations, Connelly said the experience was “very scary.”

“You saw the doors moving, the chandeliers shaking. It was very loud,” she told Reuters as she watched the storm surge move in from the Gulf of Mexico following fierce winds that blew out windows in nearby buildings, stripped trees and slammed cars together in the parking lot below.

The storm killed at least 28 people as it raged through the Caribbean en route to Florida. On Sunday, Irma claimed its first U.S. fatality - a man found dead in a pickup truck that had crashed into a tree in high winds in the town of Marathon, in the Keys.

Officials in Orange County, which includes the central Florida resort city of Orlando, reported a U.S. second fatality, from a single-car crash that was apparently storm-related.

Irma’s center came ashore at Marco Island not long after it was downgraded to a Category 3 storm from a Category 4 on the five-point Saffir-Simpson hurricane scale, with maximum sustained winds of 120 miles per hour (195 kph).

A few hours later, it was downgraded again to Category 2, with maximum sustained wind gusts of 110 mph (175 kph).

Irma was forecast to continue churning northward along Florida’s Gulf Coast through the night, further weakening along the way before diminishing to tropical-storm status over far northern Florida or southern Georgia on Monday.

Forecasters warned that Irma remained dangerous as it toppled power lines, tore up roofs and threatened coastal areas with storm surges as high as 15 feet (4.6 m). Tornadoes were also spotted through the southern part of the state.

By late Sunday, at least 4.4 million homes and businesses had lost power, according to Florida Power & Light and other utilities.

Aerial video footage broadcast by local television showed what appeared to be extensive flooding of a mobile-home park in Naples, an upscale beach town about a dozen miles (19 km) north of Marco Island. Emergency officials in surrounding Collier County warned late on Sunday that floodwaters were still rising in Naples, but the overall scope of storm surge predictions was scaled back somewhat from earlier in the day.

Some 6.5 million people, about a third of the state’s population, had been ordered to evacuate southern Florida as the storm approached the U.S. mainland after pummeling Cuba with 36-foot-tall (11-m) waves and ravaging several smaller Caribbean islands.

An estimated 170,000 people were lodged in some 650 emergency shelters as of early evening, according to the Florida Division of Emergency Management. Residents across South Florida were advised to remain indoors to avoid hazards posed by downed traffic signals, fallen power lines and debris that made local roads unsafe for travel.

“This is a life-threatening situation,” Governor Rick Scott told a news conference. Curfews were being enforced in numerous communities on Sunday evening, including Tampa, St. Petersburg, Orlando and Miami, as several Florida counties reported arrests of looters taking advantage of homes left vacant by evacuations.

The storm’s westward tilt to Florida’s Gulf Coast spared the densely populated Miami area the brunt of its wrath, but the state’s biggest city was anything but unscathed.

One woman in Miami’s Little Haiti neighborhood was forced to deliver her own baby because emergency responders were unable to reach her, the city of Miami said on Twitter. Mother and infant were later taken to a hospital, it said.

Waves poured over a Miami seawall, flooding streets waist-deep in places around Brickell Avenue, which runs a couple of blocks from the waterfront through the financial district and past foreign consulates. High-rise apartment buildings were left standing like islands in the flood.

“We feel the building swaying all the time,” restaurant owner Deme Lomas said in a phone interview from his 35th-floor apartment. “It’s like being on a ship.”

Last week, Irma ranked as one of the most powerful hurricanes ever documented in the Atlantic, one of only a handful of Category 5 storms known to have packed sustained winds at 185 mph (297 kph)or more.

Irma is expected to cause billions of dollars in damage to the third-most-populous U.S. state, a major tourism hub with an economy that generates about 5 percent of U.S. gross domestic product.

Miami International Airport was slated to be closed to commercial airline traffic on Monday.

On Marco Island, home to about 17,000 residents, 67-year-old Kathleen Tuttle and her husband rode out the storm on the second floor of a friend’s condominium after failing to find a flight out. She feared for her canal-facing home.

“I‘m feeling better than being in my house, but I‘m worried about my home, about what’s going to happen,” Tuttle said.

“I am prepared to say goodbye to my things, and that is hard,” Allison McCarthy Cruse, 42, said as she huddled with seven other adults, three children and seven dogs in the home of a neighbor just blocks from the water in St. Petersburg. She said she feared the roof on her own house might not survive.

U.S. President Donald Trump, acting at the governor’s request, approved a major disaster declaration for Florida on Sunday, freeing up emergency federal aid in response to Irma, which he called “some big monster.”

KATHMANDU, Feb 6: The National Reconstruction Authority (NRA) has said that it will provide the total housing reconstruction grant of Rs... Read More...

Once a bustling business hub, Kathmandu’s New Road and Asan area have a few takers today (with photos)
24 minutes ago

Once a bustling business hub, Kathmandu’s New Road and Asan area have a few takers today (with photos)
24 minutes ago