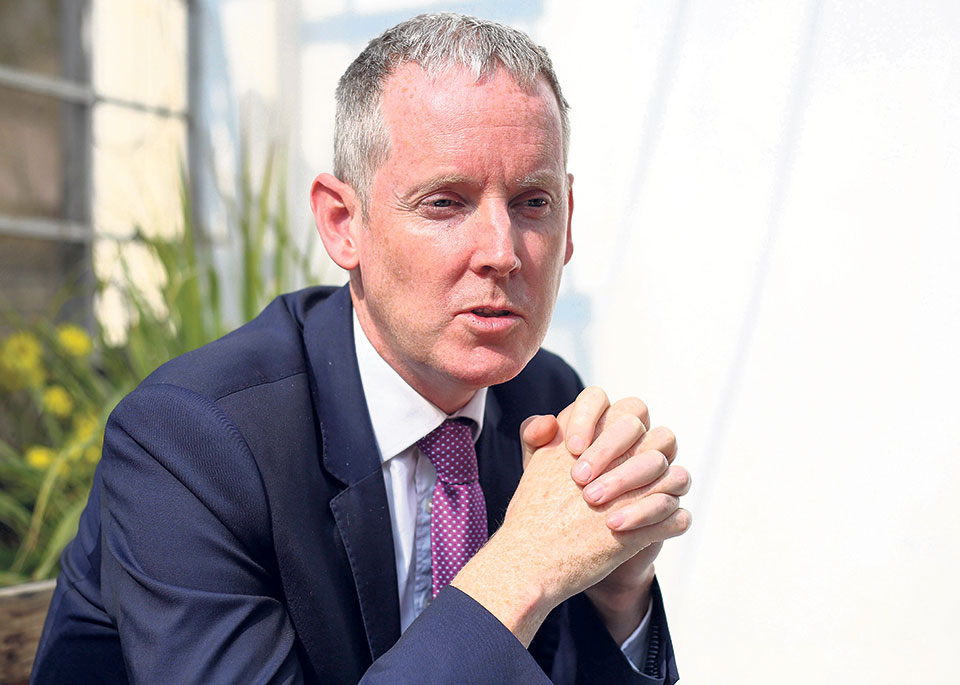 European Investment Bank (EIB) is the public bank owned by 28 member countries of the European Union. The EIB supports investment in 160 countries worldwide. In Asia, it focuses on support for climate-related investment. Nearly 14 percent of its investment is outside the EU including Asia. The EIB has provided more than 190 million euro for energy investment across Nepal over the last five years.

Andrew McDowell, Vice President of the bank, was in Nepal in last month to discuss the bank’s support to Nepal with senior ministers and business leaders. The visit was the first high-level visit from the world’s largest international public bank in five years.

EIB is in Nepal for five years with an investment commitment of 190 million euro. How has been the experience so far?
We have begun operations in Nepal five years ago. We have signed three loan operations in Nepal. In 2017, we had the first disbursement. We have another disbursement this year. That’s very positive. We hope we would be able to accelerate timelines between project approval and contract signature and disbursement. That’s the pattern we see in every country where we work in. It takes few years initially, and when everybody gets to know each other and the documentation process is completed, we would accelerate the timelines.

But, in general, the relationship is extremely positive. We have our clear focus on sustainable energy investment including expanding electricity distribution to support rural electrification through Nepal Electricity Agency. Our sector focus in Nepal reflects national priorities and investment gaps. We have a desire and appetite to do more in Nepal.

What are the major areas where Nepal may seek investment from the EIB in future?
Renewable energy and transmission and distribution system have been main focus of our help. We would like to expand that portfolio investment. We are aware of Nepal’s own ambition of expanding electrification domestically as well as export power to neighboring countries. We would like to be the financing partner in delivering those ambitions. We have detailed discussion on advancing our support in forestry. That is the area where we can bring a lot of experiences. In fact, we are the largest financer of forestry programs in the world. We have agreed with the Minister for Forest and Environment to accelerate applications for EIB financing.

We have also discussed to advance our supports for local road projects in the new federal system. In the longer run as the plan becomes more mature, we would like to be involved in the railway projects and some of the interconnectivity plans that are being planned with India.

Again, that’s the area we bring a lot of expertise from Europe and elsewhere in the world. This is also the area where we can cooperate with some of national or bilateral agencies including KfW [a German government-owned development bank] in providing package of supports.

Many development projects in Nepal suffer delays mainly due to poor execution capacity of the government. Were you assured that projects financed by EIB won’t meet the similar fate?
The need for physical infrastructures is very evident in Nepal. From project preparation to execution in larger infrastructure programs, it’s a very complex business process. We have found that ministries are very much aware about those challenges. They have got programs and they are working with other development partners on capacity building exercises. We welcome the commitment that we hear from ministers to accelerate the process of capacity building in order to be able to present well-prepared projects.  Unlike some other international financial institutions, we tend to make commitment at the point when the projects are ready for financing or ready for execution or they undergo through feasibility and detailed planning exercises.

Do you see any scope of partnership with other institutions like the World Bank, Asian Development Bank or the newly established Asian Infrastructure Investment Bank?
Definitely! The Chilime-Trishuli transmission line project is going to be jointly financed by EIB and KfW. Similarly, we have projects in the pipeline where we know ADB and the World Bank are also involved. Again, we are very comfortable co-financing projects with other international financial institutions.

In fact, we only finance up to 50 percent of the project for the very reason that we want to make sure that the scarce resource is leveraged to provide multiplier effects. In India, we are providing financing to Bangalore metro project along with AIIB and Pune metro project with AFD, the French Development Agency. So, working with other partners is very much part of our business model. 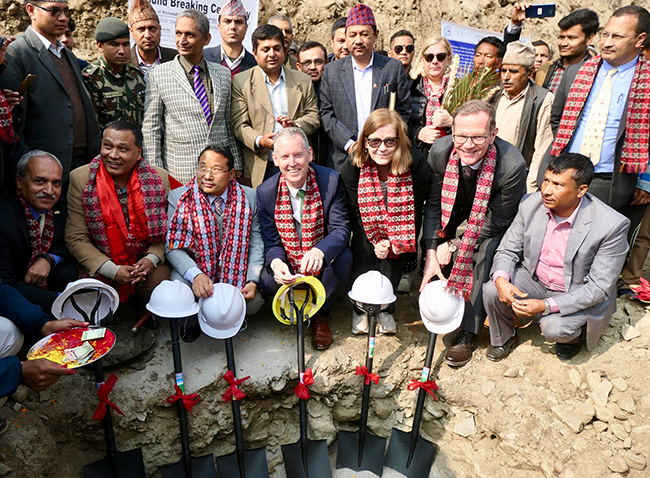 EIB’s Vice President Andrew McDowell (center in the front row) along with Minister of Energy, Water Resources and Irrigation Barshaman Pun (third from Left in the front row), European Ambassador to Nepal Veronica Cody (third from right), among other dignitaries, attending the groundbreaking ceremony of the Chilime-Trishuli transmission system on November 21.  Photo Handout: European Union to Nepal

There are concerns that development partner’s funding comes with onerous conditions. Are there any strings attached with EIB investment?

We expect any project to deliver strong economic and social impact while also meeting environmental and social standards. We also have requirements the suppliers and contractors of those projects are selected in a transparent and open way. They are selected on the basis of value for money and experiences in delivering those projects.

We think that’s very big advantage for the country and promoters because that releases them from some of the obligations some other financers might bring in terms of tight procurement. In fact, it’s very much part of the European approach that procurement should not be tight to any particular country or any particular contract. I think it’s an advantage in the context of Nepal.

What would be the estimated resource envelope for Nepal?
We don’t allocate funding on a country by country basis. We are a project financier. Whenever a country presents a best-prepared project that’s ready for financing, we will get the lion’s share of our resources.

We have a picture of how much we would do in Asia. Whether that goes to Bangladesh or Nepal or some other countries, it’s not certain. It’s really up to them or Nepalese authorities to speed up in presenting projects to the EIB.

Why the EIB is so keen on making investment in clean energy and climate action projects?
The European Union sees itself as the global leader when it comes to address the climate change. In all multilateral forums including the United Nations, Europe has taken a lead in setting the most ambitious targets for climate mitigations and adaptations. As the EU public bank, such commitment fits into our priority. Our 35 percent investment commitment outside the European Union is on climate action projects.

Nepal has low green house gas emissions, but it is one of the most vulnerable countries in the planet. This is also why our part of the lending would not only be for the climate mitigation but also for also climate adaptation.

As the world’s largest financier of renewable energy, EIB is keen on helping Nepal protect and adapt key infrastructure to climate risks. We look forward to seeing how EIB can contribute to prosperous Nepal for happy Nepali in the years ahead.