We will meet new capital requirement by mid-July 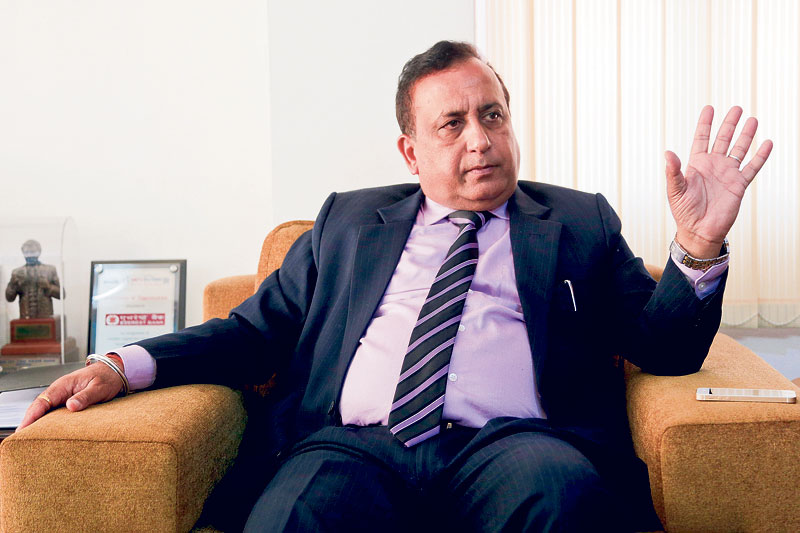 Arun Kumar Ahluwalia, the CEO of Everest Bank Ltd, is soon returning to his parent bank, i.e. Punjab National Bank, after completing his three-year term. He has been promoted to the post of General Manager of Punjab National Bank. He holds over three decades of experience in banking sector and has key expertise in credit and recovery. Punjab National Bank holds 20 percent stake in the EBL which has been serving its clients through a network of 61 branch offices, 86 ATMs, five extension counters and 24 revenue collection counters in Nepal, and a representative office in New Delhi, India. As Ahluwalia wraps up his tenure with EBL, Republica's Sagar Ghimire talked with him to know about his experiences in Nepal. Excerpts:

How has been the experience of leading a joint venture bank in Nepal?
When I came here, the economic condition of Nepal was very different. There was huge liquidity surplus in the market. Most banks had been forced to slash their lending as well as deposit rates. While there was too much liquidity in the market, there were few takers of credit. As a result, there was huge and sudden decline in interest rates. It was also affecting the profitability of most of the banks as large amount of funds were lying undeployed. As we were coming out of this scenario, unfortunately, the earthquake and then the blockade occurred. All our plans went haywire. So, I would say that was a bad time for the country as well as for banks in general, and Everest Bank in particular. We all faced this with a lot of resilience. With the support of our staff members and all stakeholders, we were able to come out of it successfully.

What are the major challenges and opportunities that you see in Nepal?
The market has since taken a U-turn and there is liquidity crunch in the market. It has happened due to a number of reasons. There is a pressure on banks to increase their business owing to increase in capital base. While increasing the credit, a bank has to maintain a minimum credit-deposit ratio. But, the deposits are not easy to come by. After all, the remittances, which are a major chunk of deposit source, keep on vacillating. The government spending also is yet to come into the market. In this scenario, there is a pressure on deposits which has led to liquidity crunch and banks are forced to look for deposits at higher rates. When you take very high cost deposits, the rate on the advances will also shoot up as the burden will be ultimately passed on to the consumers.

I am hopeful that the liquidity crunch would be a temporary phenomenon and it would be taken care of over a period. Once the balance is maintained between high and low liquidity, things will be normal and banks will be doing business as usual.

Can you share the latest financial position of the bank?
We posted a good profit in the last fiscal year. I assure you that present quarter profit, though not yet published, will also be good. The business has been picking up and the future looks very bright. We did a business of Rs 162 billion as of last fiscal which is a quantum jump in last three years. Our profit also increased considerably. It is going to be much better in the coming quarters and the current fiscal year, if situation continues to remain the same.

Banks are making impressive profits despite economic sluggishness in the country. Does this mean banking industry is immune from all these problems?
Banks are part of the economy, rather drivers of it, and also face the same problem that the economy faces. The business was not good in the last year. There was a mismatch of demand and supply. Most of the borrowers decided to go slow. Automobiles, electronic, infrastructure and manufacturing sectors were badly affected. That was the time when all the banks were affected. It was only after Poush (mid-January) that business started picking up. So, whatever the profits that banks, specifically our bank, made were only in the last two quarters, or after Poush (mid-January) when the demand for credit really picked up. Otherwise, first two quarters were dismal and the balance sheets were getting negative, businesses were going down and nothing was picking up in such a bad economic situation. In any case, the banks reflect the state of business and growth of economy.

Some bankers have voiced reservation over some regulatory measures like directed sector lending and requirement to make 2 percent loans directly by themselves. What is your observation?
Regulator has access to much larger information and has a wider vision. They observe the best practices from all over the world.  The Nepal Rastra Bank (NRB) understands what is good for the economy and how to protect the interest of all stakeholders. Its policy is not limited to banks only, but for the overall development of the economy and country as a whole and for kick-starting the economic growth.

How the interest rates corridor system implemented by the NRB is going to help banks, depositors and borrowers?
It's already in place in most of the countries. Till now, only reverse repo was taking place in Nepal. Repo has been a very recent phenomenon. Over the period, this corridor becomes a normal thing and stabilizes. Once there is two percent or three percent corridor, this will start giving result in management of liquidity.

Will there be any change in the strategy, direction and plans of the bank once your successor takes over?
I don't think so. The top management of our bank comes from Punjab National Bank. So the continuity is maintained here as we come from similar background, have similar understanding of business and share more or less similar experiences. Anybody who comes here comes with same set of mind and adds value to the bank during the stay.

However, changes in the liquidity positions and other economic situations of the country require frequent change in short-term strategies. So the short-term strategy and tactic might be different depending on the time and requirement, but the policy and directions will broadly remain the same. We try to maintain consistency in all the policies of the bank. Further, our endeavor all the time is to increase our customer base both in deposits as well as in advances.

Unlike development banks and finance companies, joint venture banks are expected to make investment on mega and large-scale projects. But EBL seemed to be focused on retail financing only.

This appears to be a misconception about our bank. But it's not the case as nearly 60 percent of our portfolio is other than the retail. We have been financing the corporate as well as number of hydropower projects and in some cases we are the leader of consortium too. We are leader in some of the infrastructure and manufacturing projects also.

Preparatory work of Inkhu Khola, Lower Hongu Khola to be completed by mid-July