We love Nepal as much 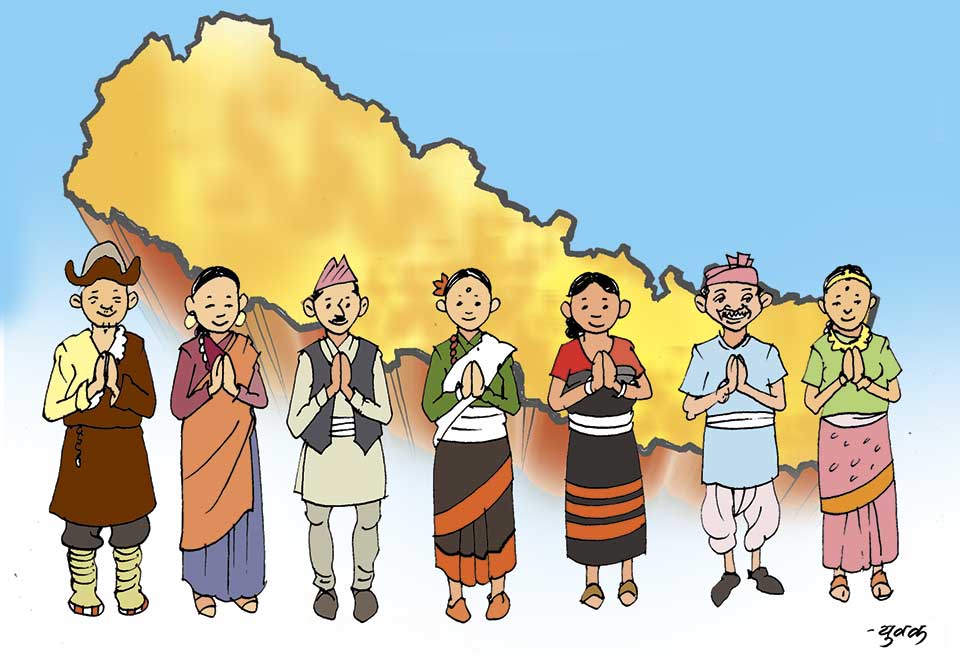 Many Nepalis living abroad may not have been able to directly help, but they have love for the country in their hearts even as they struggle to settle inforeign land

As ultra-nationalism was plaguing the world, it’s no surprise that a person who led the conspiracy theories became the US president. Europe is struggling with the emergence of extremists that are starting to not just win elections, but undermine democracy in the interest of ethno-nationalist groups. In Nepal, we see emerging strife among ethnic communities, increasing intolerance in the mainstream and hateful rhetoric about Nepalis who live and work abroad even among the learned class.

With rapid globalization, Nepali identity is becoming more complex. Our mobility pattern has also drastically changed. We moved to cities like, say Biratnagar and Nepalgunj, from the hills and then to the capital city. Many of us then moved abroad from there.
I, for instance, am currently engaged in research, teaching, and academic leadership, all of which is primarily directed by the desire to contribute to change and improvement in higher education in Nepal. I work for an American university not far away from Washington DC, but I haven’t really left Surkhet and Kathmandu behind. I have my heart and mind in Nepal.

Love for the country should not be pegged on a document which has political implications.

But many, including most educated who directly and substantially benefit from the globalization of our economic, social, and professional lives, think what I am doing is just plain wrong.  They think the people like me do not love Nepal.

Nationality is the most powerful way that humans identify themselves and come together for a common clause. We need to understand the fractal complexities of citizenship. There are millions of stateless citizens around the world simply because they are denied citizenship for various reasons. Many millions may have dual citizenships. Why do the intellectuals ask for your “official identity card” before loving your home country? I think official “citizenship” is an artificial contract or compromise because you would be denied social services without having one. But love for country is different and it should not be pegged on a document which has political implications.

When do people lose citizenship? Is it when they get the Gurkha medal? Or is it when they accept an official document (eg green card) from another political structure known as a nation? Or do they lose it when they stop giving back to their homeland?

I am a Nepali citizen, currently residing in the US. The organization I lead is a network of scholars advancing global social mobility by creating and sharing scholarly research focused on international education and by facilitating academic exchange across nations.

We are attracting educators and academic researchers from around the world, and our mission is to connect experts for academic programs that make impact by inspiring young men and women. We seek to use it as a platform through which we could support Tribhuvan University and other academic institutions in Nepal.

We have been putting all our efforts to garner support for Nepal. As the country is re-emerging from the rubble, Nepal has a great deal of potential, which I see in two major aspects—a) the extraordinarily resilient people and formidable young population, b) the outstanding Nepal folks around the world who have proven the Nepali identity of friendly and hardworking people.

Resentment against moving to, working in, or even permanently settling in another country is understandable. What is hard to understand is how people manage to just pick one lens, find their artificial red lines, judge and outright tell others what they are and aren’t, can and cannot do. Of course, nations are the most powerful markers of identity but to pretend that this is the only one way to identify oneself is extremist.

How about entrepreneurs of Nepali origin in Russia, Japan, Australia, UAE, and USA who are making major contributions to the economy back home? How about the Britain-born children of those who have settled in Britain who not just celebrate Nepali traditions, but are involved in meaningful philanthropy in Nepal? How are we to tell all the people who are Nepalis by extension of their documents, their traditions and language, their heart and investment of life and assets that they don’t have a claim to that extended identity?

One person could stick to one document (citizenship or passport), one milestone (leaving home, or buying one abroad), one action (revealing a new identity on social media) as transgression. Another might not even tolerate any of the above. But what if the person’s family is already abroad? What if that abroad is just across the border in Darjeeling or Gorakhpur? How are we to tell the child born while parents are in the United States? Are these children to be welcomed or to be treated with disdain? Who has the right to be judgmental of innocent children, the worker who decides that he’s found better economic opportunities for him and better education for his children?

Having seen Nepalis in many different circumstances in different countries, and having seen their love and commitment for Nepal, I always seek to reach out to them for collaboration and network, hoping to be able to channel their love of county for nation building. I know that most Nepalis who live outside the country love Nepal wholeheartedly.

The average person may say those people leaving home are irresponsible, selfish or elitist. But then it is the average citizens who have been leaving the country by the thousands. So, there must be more acceptance of those who have the obligation to live and work abroad.

Of course, brain drain is a real and serious challenge for most developing countries. But cursing the fire doesn’t put one out. What we need is social policy, robust intellectual discourse, economic opportunity, and a more realistic understanding and appreciation of global human mobility.

We also need an appreciation of the fact that from scientists to engineers and humanists to economists, Nepali intellectuals are advancing an image for Nepal. It is certainly not just our still mountain and ancient knowledge that is doing this job. And we certainly don’t just want to be in the news when our brothers and sisters die under conditions of bonded labor. We can use quite a bit of open-minded and broad thinking about our nation’s place in the world.

If you live in the city, it could be argued, you have discarded the village, for that is what real Nepal is. Indeed, this was the argument the demagogues probably advanced in the past. If your children go to college in India, you are a traitor, it could be said. But the question that very intellectual ought to ask, as an intellectual, is why do families make that decision.

Change the mindset
If a young growing professional is writing a poem with a protective narrative, it is somehow understandable that the person is fearful of losing his or her own power, position, or privilege. What can explain the same if the divisive remarks are made by a senior professional, who seemingly loves his country? Wouldn’t the nation-building endeavor seriously discounted if intellectuals themselves start creating divisive narrative?

Nepali people from around the world are showing love for the country in many ways. Many are sending their hard-earned savings back home, others are gaining precious resources such as social, political, technical, or economic capital. Many may not have been able to directly help, but they also have love for the country in their hearts as they struggle to settle in a foreign country.

There was a divisive narrative flowing in social media recently alienating Nepali diaspora. They were called “bideshi”, “bhagauda” and “bhasiyeka” prani? For general public, family members residing in foreign countries are hope, charity, and pride.

Popular intellectuals who flood social media with agonistic narratives could dispel those misconceptions. Intellectuals must join hands to create a mechanism that promotes positivity. Nepali people have the courage, intellect and resilience. We will not buy the ultra-nationalist divisive notions. We will rise. We love Nepal.

The author is president of Society of  Transnational Academic Researchers (STAR), which aims to advance global social mobility using research and advocacy, uttam.gaulee@morgan.edu