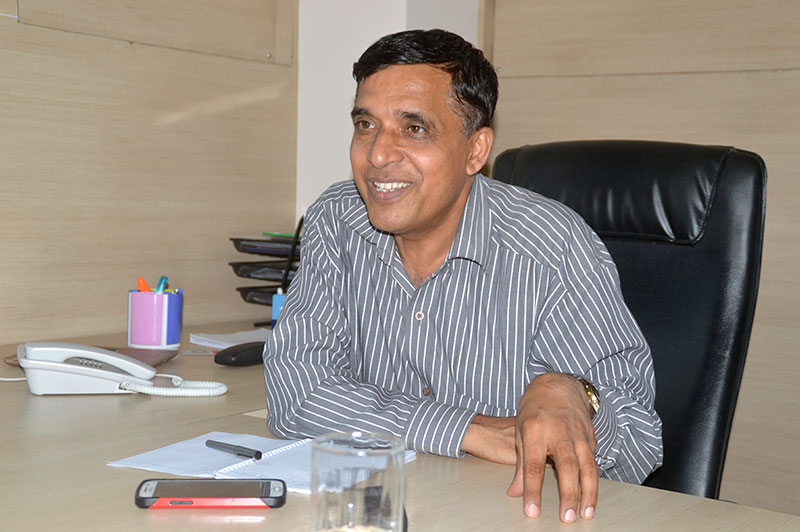 Chairperson of the ‘Commission for the Determination of the Numbers and Boundaries of Village Bodies, Municipalities and Special, Protected or Autonomous Regions’ in federal Nepal, Balananda Paudel, says the commission is working day and night to submit its final report to the government at the earliest, so as to pave the way for local elections. What are the bottlenecks? And why is restructuring of local units important? Republica’s Mahabir Paudyal and Sangeet Sangroula visited the commission’s office in Buddhanagar, Kathmandu, to gather his views. Excerpts:

To start with why did we need to restructure existing local bodies?
The existing village development committees and municipalities, also called as local bodies (sthaniya nikaya), have their origin in 1961. The current local bodies are minor modifications on the 1961 structure. With the promulgation of the new constitution we now find ourselves in a new political context. The constitution has distributed state powers to three levels: federal, provincial and local. It has clearly defined powers and responsibilities of the local level bodies (sthaniya taha) and empowered them to formulate and implement their own laws. Thus the purpose for which the local bodies were created in the past is not relevant today. The local bodies envisaged by the new constitution enjoy far more powers and rights in terms of local governance and development. Earlier, the governance at the local level would be administered by the executives and officials appointed by the central government. The budget would be formulated by the central government. In a way, the local bodies were accountable more towards the center than the local people.

Would it be right to say that the existing local bodies have become unscientific?
Like I said, it is the demand of the new reality. Existing local units were demarcated in the past based on the context of that time. Perhaps they were right for that context. But there are deficiencies in existing units. For example, there are about 35 VDCs without geographical continuity.

There are such VDCs where you have some parts located in one place and other parts lying beyond two or three intervening VDCs. Restructuring was also necessary for proportionate distribution of development.

How has your commission gone about its task thus far?
We have completed statistics collection. We are almost done with the analysis of the statistics as well. Based on this analysis, we will prepare a draft profile of each VDC and municipality. We have a technical committee in each district headed by Local Development Officer. This committee will be given orientation trainings by July 24. After this, these committees will start the work on the ground. They will take the views of local actors and other related stakeholders on demarcation and restructuring of local bodies in each district. The process will be made as participatory as possible. The committees will take into consideration access and ease of the people, togetherness and cohesiveness of the community, natural resources and physical infrastructure while demarcating boundaries of local units. It will then give these new local formations names, demarcate boundaries of smaller ward units, and then recommend where to place the offices of these units. The committees will then submit their final reports to the commission.

So how soon we complete the final report will depend on how early the technical teams submit their reports.

Can you give us a rough estimate of the amount of work done so far?
We have completed all preparatory works. But the real work of getting into the field is yet to start. It would be impossible for the commission to reach every district. It will take us two more years because of limited human resources. This is why technical committees have been constituted in all 75 districts to work on our behalf. We have prioritized the works based on urgency. There are five thematic teams working on matters such as data analysis and functioning of municipalities. Practically, we have completed the first phase of the work now.

The second phase of mobilizing technical teams on the field will begin by July-end. They are expected to complete this phase by mid-September. We will analyze the reports of the technical committees and prepare the preliminary report in the third stage. The report will then be sent back to the technical committees with our feedback in the fourth stage. Then we will submit the final report to the government.

So can we say that local elections scheduled for November-December are unrealistic given the sheer volume of the work that remains?
It all depends on how smoothly the technical teams can work. Thus it would be difficult for us to predict when we will complete the whole process.

We need to take the consent of local people and consider their views as well. Thus the process calls for time. But the commission is well aware that there is a constitutional obligation to hold local election as early as possible. But a lot depends on the extent to which various government bodies, political parties and other stakeholders cooperate with us. We are ready to work day in and day out. But there are some technical difficulties.

What are those difficulties?
For example, August and September are the months civil servants are transferred. The Ministry of General Administration transfers civil servants in August. Other ministries do so in September. We are providing orientation training to members of technical committees in July-August. Suppose that the trained officials are transferred right after that. It will adversely affect out working calendar. Therefore we have requested the Ministry of General Administration as well as other ministries not to transfer civil servants this August and September. We have asked them to wait until fieldwork is complete. So, again, a lot rests on the kind of cooperation we get.

With your experience so far can you say that other stakeholders have been cooperative?
We did not get the expected support during the statistics-collection phase. We are still struggling to collect statistics from some local units. Some government authorities hesitated to share information, on one or the other pretext. The commission takes this noncooperation seriously. Some government authorities have not maintained good data and those which have hesitate to share. This is worrying.  We have formed a facilitation committee under Ministry of General Administration to clear this bottleneck. We hope this problem can soon be sorted out.

But why the haste to restructure local bodies when even the broad contours of federal Nepal are being contested?
The extent of distribution of services and development at the local level will depend on how well local units are restructured. Thus restructuring is directly related to local governance and development. Even more important, local units are, in a way, the base of the federal parliament. The local units elect the District Assembly. District Assemblies cannot be formed without the election of local units. The chief and deputy chief of village council and municipal council are members of the electorate of the National Assembly. Thus without holding local elections, we cannot form National Assembly in Federal legislature. Our federal legislature will be incomplete.  And if we do not have the election of National Assembly, it will hamper the nomination of parliamentarians under proportional representation, which means the lower house will also be crippled. Thus it is important for us to complete our work on time and to hold local elections at the earliest. So it’s not just a question of a constitutional obligation.

It is said that the commission is mulling reducing the number of local bodies to around 1,000 from over 3,000. Why?

We have been studying the structure of existing local bodies from various perspectives. We are looking into factors like access, population and its distribution patterns. We have found a number of discrepancies in existing local units. Some units are disproportionately large, others disproportionately small. Kada VDC of Bajhang has an area of 1,466 square kilometers. That’s too big. Jabdi VDC in Bara has only 1.47 square kilometers. In my home district, Parbat, there is a VDC 3.8 square kilometer in area. How do you explain these discrepancies?

So when we say we are thinking of bringing down the number of VDCs to around 1,000, it might seem like a big reduction. But that is not the case.

Some existing VDCs do not qualify for VDC status in terms of population and area. The new local units will function as local governments. The constitution calls it a local government. A local government demands certain territory so that it has required infrastructure, area and population. If we retain existing units we will have a situation where the smallest unit like Jabdi and the largest unit like Kathmandu Metro will exercise the same powers and rights. Thus some VDCs will be merged in the new structure. But let there be no confusion. The VDC and municipality offices which are functioning as local government headquarters today will remain where they are as service centers. People need not worry.

How will the recent government change affect the commission’s functioning?
Whoever leads the government, it won’t affect us. We have a definite mandate given to us by the constitution.  Political parties are also bound by the constitution. But let me take this opportunity to remind all that we are in a historic process of restructuring local units, for the first time since 1961. If we make a mistake now, the posterity will have to bear the consequences. We expect the support of everyone in this historic undertaking.