WB projects economy to grow at 6.4% 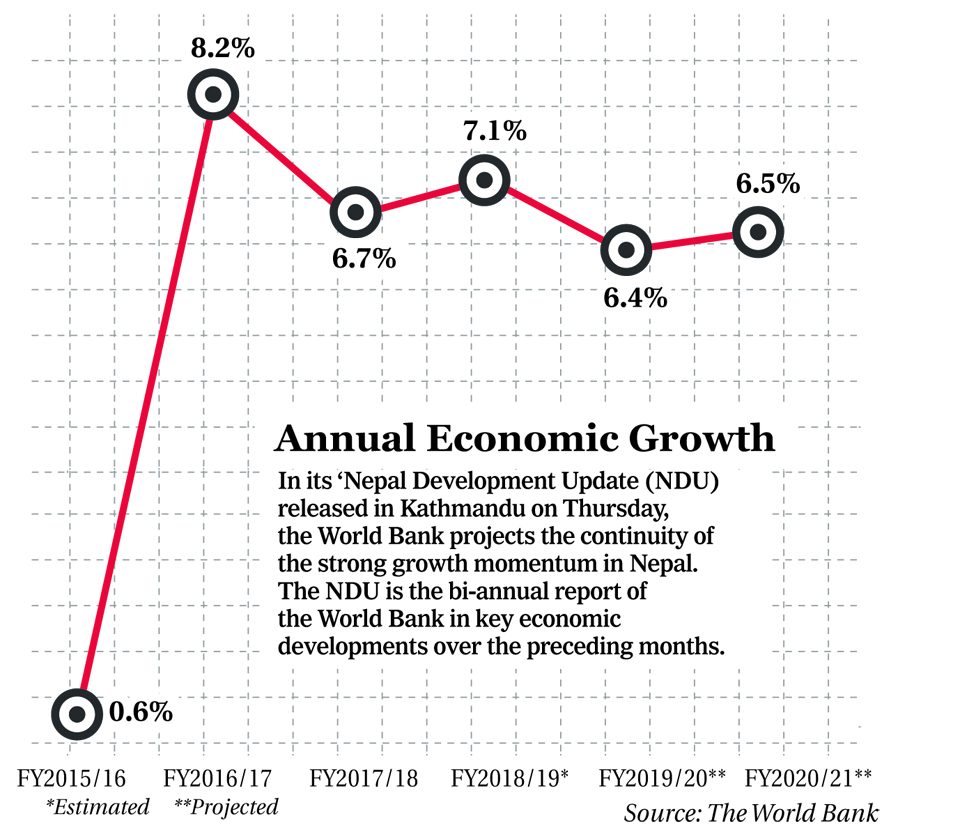 KATHMANDU, Dec 13: Nepal’s economy is expected to grow by 6.4% in the current fiscal year – FY2019/20, according to the World Bank’s latest projection.

In its ‘Nepal Development Update (NDU) released in Kathmandu on Thursday, the World Bank projects the continuity of the strong growth momentum in the country. The NDU is the bi-annual report of the World Bank in key economic developments over the preceding months.

However, the projection is lower than the government’s target of achieving 8.5% economic growth in FY2019/20.

According to the report, the growth over the medium term is likely to average 6.5% supported by a strong service sector.

“The growth will be driven by services, underpinned by steady remittance inflows and high tourist arrivals,” read the report. High tourist arrivals will be supported by the Visit Nepal 2020 program, the completion of the second international airport, the construction of big hotels and the increase in air connectivity through implementation of the newly-revised air service agreements with countries like Australia, Cambodia, China, the UAE and Vietnam, the update noted.

On the supply side, according to the report, the growth will continue to be driven by private investment and government consumption. “Government consumption will be supported by increased spending on salaries and on goods and services. In addition, efforts aimed at building capacity at the sub-national levels coupled with the implementation of performance-based contracts is also likely to raise government spending,” it added.

Industrial growth is likely to be supported by construction activities, investments in the cement and hydropower sectors, and improved capacity utilization in manufacturing sector, according to the report.

The import growth will slow down as the government implements its program to keep the fiscal deficit in check, helping to contain the trade deficit, the World Bank said in the report. The focus going forward will need to be on strengthening exports, it added.

“Increased exports will be critical to sustained growth over the medium-term. It will be important for government to continue with reforms to attract foreign investment,” the report quoted Kene Ezemenari, World Bank Senior Economist, as saying.

KATHMANDU, June 6: The World Bank has assumed 7.1 per cent as Nepal’s economic growth rate for the current fiscal... Read More...

KATHMANDU, Oct 14: The World Bank has projected the growth of Nepal’s gross domestic product (GDP) to average at 6.5%... Read More...

In the name of Development Aid
19 hours ago

Youth attacked with Khukuri outside High Court
11 hours ago

Taliban hang body in public; signal return to past tactics
13 hours ago

Dead body found at ward office in Golfutar
13 hours ago