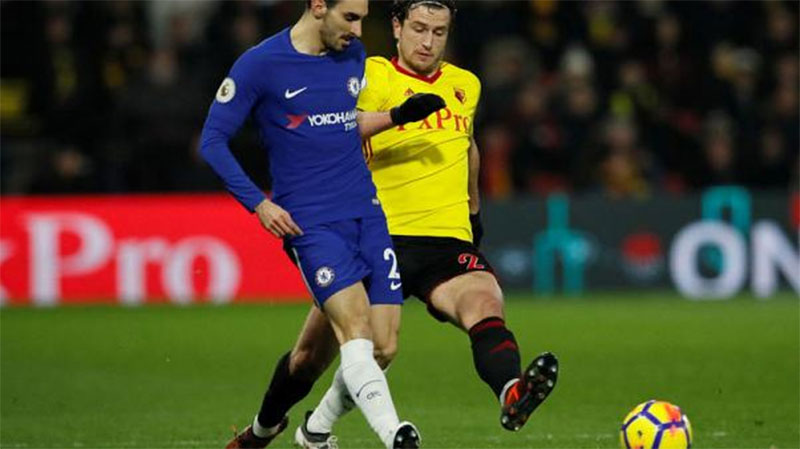 LONDON, Feb 6: Ten-man Chelsea suffered another setback in their stumbling season as they lost 4-1 at Watford on Monday after conceding three late goals to go down to their second straight Premier League defeat.

Daryl Janmaat, Gerard Deulofeu and Roberto Pereyra all scored late on in response to Eden Hazard dragging Chelsea back into the game with a curler in the 82nd minute after Tiemoue Bakayoko was sent off for a second booking on the half-hour.

Chelsea cruised to the title in coach Antonio Conte’s first campaign in England last season but they are 19 points behind runaway leaders Manchester City and are focused on finishing in the top four Champions League qualification spots.

Chelsea sit in fourth spot, a point behind third-placed Liverpool and one ahead of Tottenham Hotspur in fifth.

“I tried to warn everyone about the difficulty of our path in the league and Champions League,” said Chelsea coach Antonio Conte. “We performed very bad but maybe I made the mistakes with the starting XI today. My choice was very poor I think.”

Mid-table Watford had taken the lead in the 43rd with a Troy Deeney penalty after Chelsea goalkeeper Thibaut Courtois brought down on-loan Barcelona winger Gerard Deulofeu.

By that stage, Chelsea were down to 10 men after their France midfielder Bakayoko was booked twice for challenges in the space of a few minutes before the half-hour mark.

Watford reacted quickly to Hazard’s equaliser as defender Janmaat exchanged passes with Pereyra before shooting low past Courtois. Deulofeu sealed the win in the 88th with his first goal for the club before Pereyra got the fourth in added time.

Monday’s loss has added to the pressure on Conte, who faces more questions about his future after a poor start to 2018 which has seen Chelsea knocked out of the League Cup by Arsenal before they lost 3-0 at home to Bournemouth last week in the league.

“My position? It is the same. I stay here, try to work and put all myself in the work,” Conte told Sky Sports. “The pressure? What is the pressure? I work - if this is enough it is, OK. Otherwise the club has to take another decision.”

WATFORD, Aug 20: Diego Costa scored a late winner for the second time this week as Chelsea came from behind to beat... Read More...