Water sources drying up due to encroachment on Chure region 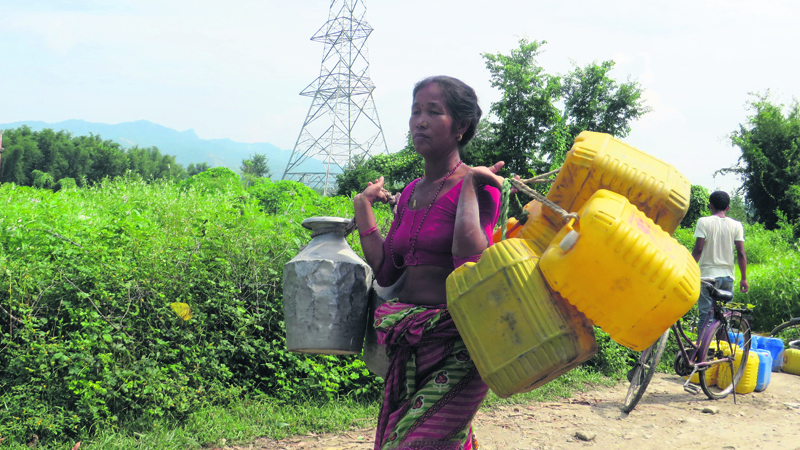 PARASI, June 8: Sunawal area in west Nawalparasi is facing a shortage of drinking water these days as most of the water sources in the Chure hills have dried due to the over-exploitation of natural resources.

Over mining and exploitation of natural resources in the Chure region has resulted in the drying of groundwater source in Sunawal. This has led to a shortage of water making a life of the people difficult. Locals have expressed concern after the water sources started drying one after another.

Sunawal is reeling under acute shortage of water because most of the water sources have dried due to the rampant mining of stones and aggregates, and destruction of environment going on in the Chure hills, Dolraj Bhandari of Sunawal-12 said. He has called for stringent measures to stop the over-exploitation in the Chure area.

The water supply projects which are distributing water for household purpose have also reduced the volume of water they supply because of the drying water sources. Efforts at pumping ground water are also not producing results. The plan to distribute water by installing an overhead water tank at Durgatol of Sunawal-13 has flopped as underground water could not be drawn for the project, Khumananda Neupane, a local, said. "We are facing problem because muddy water comes out of the tap during the rainy season whereas it takes long time to even fill a jar during the winter," he lamented.

There are 10 water supply projects in Sunawal municipality and out of these only three are in operation while some more are under construction. Locals have called on the municipality to take measures to stop the over-exploitation of the Chure and to manage drinking water.

Sunawal municipality's deputy mayor Dadhiram Aryal said that the municipality is actively working for Chure conservation. However, he said, the bodies working in the Chure area were not coordinating with the local levels and the latter also do not have the mandate to work in Chure. He said they are holding discussion with the State government and the federal government on this matter.

The deputy mayor said that the municipality has launched a special campaign for Chure conservation and also allocated budget for construction of water supply projects.

BHARATPUR, May 5: The locals of Kalika municipality ward no 6, 7 and 8 in Chitwan district have been reeling... Read More...

KMC will continue its programs according to its policies: Mayor Balen
12 minutes ago