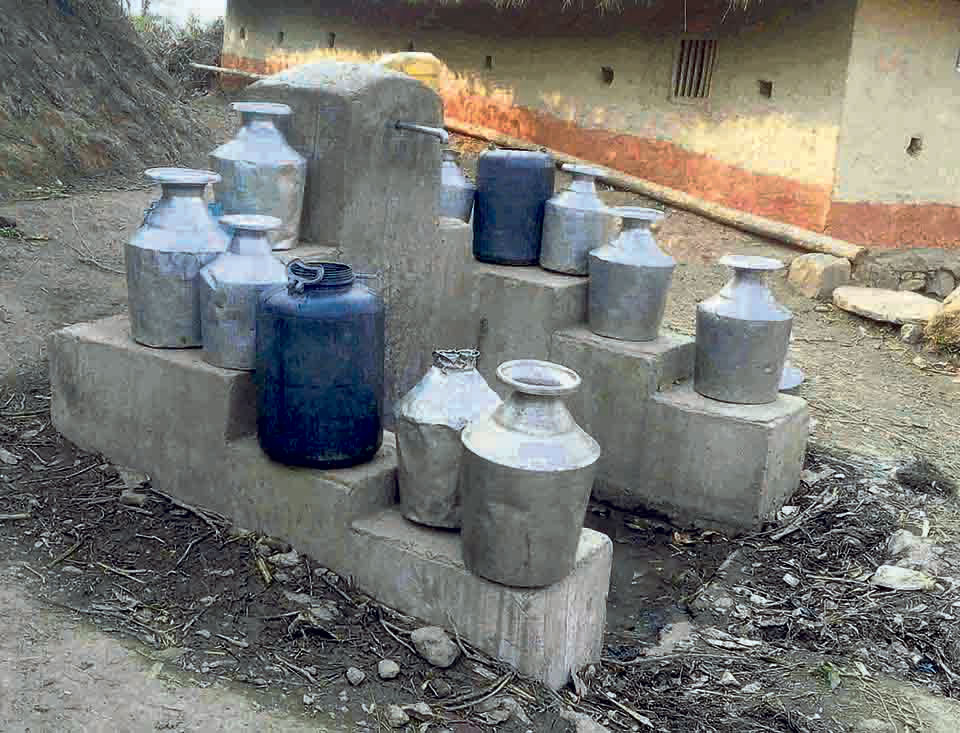 PARBAT, June 17: Acute water crisis has surfaced at Parbat district headquarters, Kushma Bazaar, for the past one week.

Following the abrupt rise in mercury with the stoppage of rainfall for the past couple of days, the water sources are drying up. Even the crisis has been exacerbated when paddy plantation was being done nearby the site of water source.

Taking bath and washing clothes are the distant thing, even the crisis of drinking water has panicked the denizens in district headquarters. The town dwellers now are compelled to fetch water from distant well, gorge and rivulet.

Durga Bhusal, School teacher by profession, who has been living at Kushma municipality-5, Badagaun, said he was feeling odd to go to regular duty at schools when there was no water to wash clothes.

Shalikram Poudel, another local, said they are facing acute water shortage when there was no regular flow of tap water. "We do not have any option but to buy jar and bottle water for daily purpose", he added.

Hotel entrepreneurs also have expressed concern over the growing crisis of water sources in the area. "In shortage of water, they are forced to shut the operation of hotel, said Sushila Kunwar, hotelier.

POKHARA, Sept 3: Six persons died and two have gone missing after a landslide swept away their houses in various... Read More...

Out of 11 micro hydro- power projects in Parbat, 8 no longer in operation

PHALEBAS ( Parbat), Dec 3: Many of micro hydro-power projects based in rural parts of Parabat, eight are not in... Read More...

All IOM exams for Monday postponed
16 hours ago

SEE and Grade 12 exams in April and May, respectively
16 hours ago