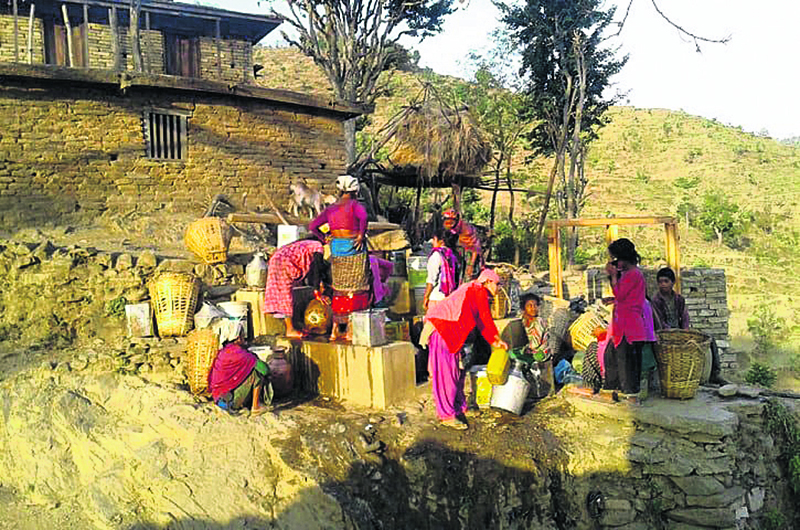 SALYAN, May 25: The family of Ramlal Yari of Manjhkada village in the hill district of Salyan migrated to Dhorpipal area last week. Yari said life in the village, which lies in Bangad Kupinde Municipality-10, has become very difficult due to the severe water crisis.

“If the problem was manageable, we would not have left the village. But the water shortage became too much to bear,” he said.

His neighbor Man Bahadur Pun also migrated to Dhorpipal recently for the same reason.
“We had to walk for hours to fetch water. We used to spend entire day just to fetch drinking water, and yet there would be no sufficient water,” Pun said.

During the ongoing dry season, locals of Manjhkada village have all left their houses and went to Dhorpipal area (a few villages away), where water management is a little better. Pun said though the displacement is very unfortunate, they left the village because there was no other option left.
A solar water lifting project initiated at Manjhkada village is still incomplete. Locals said thieves stole the solar panels of the project some time ago and the project remains stalled.

Most of the smaller springs in the village have already dried up.

According to Manamaya Budha, an elderly woman in the village, “Water crisis has made the lives of the locals miserable as they have to spend most of their time fetching water.”

“Things were not like this in the past [until a few decades ago]. But in modern times, our grandchildren are facing crippling water shortages,” she remarked.
“Locals used to collect water from ponds but even those ponds have dried up. So villagers have no option but to leave the village. How can anyone survive without water?” she said.

Migration of the villagers has affected their children’s studies. They have become irregular to school. “There is no water in schools as well. We don’t use the toilet as there is no water,” said Ramita Khatri, a local. “Our cattle are parched.”

Apart from Majhkada, Bame, Ghajrepipal and Nigalchula villages are the other villages worst hit by the water crisis.

According to Yari, most of the people from the water-short villages have shifted to Dhorpipal while some have moved to other districts. “This year alone over 200 households have migrated elsewhere due to water shortage,” Yari informed. “Some people return after the dry season ends, while many have left their village for good.”

Deputy Mayor Yari said her office has raised the issue with the higher authorities’.
“We have requested the federal and provincial governments for funds to resolve the water crisis. It needs good planning and big investment,” she said.

Plan afoot to deal with possible water crisis in Himalayas

27 monkeys drown in pond
25 minutes ago